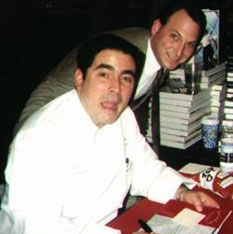 He might as well print money with his face on it.I remember back when I was knee high to a can of grasshoppers the only cooking shows on TV were Julia Childs explaining how to microwave American Cheese onto pickles and some Cajun guy with an accent so thick I assumed every episode of his show was a carefully crafted insult against my lineage. As a big fan of putting things in my mouth that don't cause me to pass out or die I have greatly enjoyed the rise of FoodTV. It is easily one of the most overlooked channels on the dial assuming you live in 1974, the last year when dials were on TVs. Sure, we all know Emeril by the trail of corpses he leaves in his wake, but there is a lot of diversity to be found in the three hours of programming they repeatedly show every day.

Let's take a look at a snapshot of the sort of programming that FoodTV currently has airing in any given three hour block. There are a few other shows that they'll rotate out less frequently, as long as you're aware of them that's what counts.

9:00 PM Emeril Live
Chef Emeril Lagasse screams "BAM" repeatedly while throwing either powdered sugar or the slightly disturbing "essence of Emeril" onto food items. The crowd then has fits of joy as he pretends to pour a whole bottle of bourbon into a cake mix. This is one of only two cooking shows where the studio audience is encouraged to bring signs, read into that what you will.

10:00 PM Iron Chef
Watch Chairman Kaga ham it up in another pulse-pounding episode of Iron Chef! Kaga is a demon, he eats whole bell peppers raw, and the fucker smiles about it. That is just the kind of hardcore motherfucker that Kaga is. He wears lace cravats and leather gloves, only a total badass like him could get away with that. Signs are also encouraged in Kitchen Stadium.

11:00 PM Bobby Flay Touches People and They Recoil in Horror
As far as we know Bobby Flay doesn't actually cook, he just sort of walks around American cities touching people and asking them to show him food. Sometimes he puts the food in his mouth but we've never seen him swallow which would lead any sane man to believe that he is actually the vanguard of an alien invasion. Beware, his sting is like that of a wasp only instead of venom it contains horrible Bobby Flay Eggs!

11:30 PM Some Female Chef No One Likes In Soft Lighting
Sure, women can cook at home, but their place is not in the professional world so we softball all the female chefs shitty "romantic recipe" shows that appeal to housewives trying to salvage their marriage and creepy female chef stalkers who own a collection of human hair. Hey toots, how about you whip up some lime Jello and tuna salad and get me the remote.

Midnight Emeril Live (Repeat)
Yeah, you just saw this show two hours ago, but what are you going to do, watch "History's Mysteries" again? Hahahah, stay tuned for paid programming you fat son of a bitch. Tiger computers has a deal for you on a great DVD Copy Center!

While this lineup seems fairly robust, I think there is a hell of a lot FoodTV could be doing with their programming but they just aren't. I don't know whether it's due to a lack of creativity among their executives or just something trivial like ratings and advertising revenue, but I'm going to tell them how it should be.

Since Something Awful is the number one website among the "FoodTV programming executives ages 18-50" demographic I think this advice should really resonate with our target audience. That's a pretty cool word isn't it? Resonate, I mean. I learned it from watching an episode of "Lost in Space" where the robot goes crazy because of this alien and everyone thinks it's okay but in fact Dr. Zachary Smith is aware that the robot is a "tin brained nincompoop" that wants to kill the Robinsons and eat their hearts. I don't remember what happened after that, probably something to do with cats or that monkey with the hairy Spock ears they had, but my point is that the robot had a gun that would resonate the molecules of the Robinsons. Ideally this advice will make the FoodTV executives glow for several seconds and then disappear in a really shoddy film effect followed by a puff of smoke. 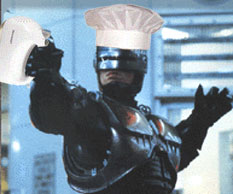 "I will contact a cooking crisis center."Concept: Three star chef Robocop takes us on a tour of the seedy underbelly of Old Detroit and brings back a scrumptious offering of forbidden delights. Filmed in front of a live studio audience, we expect the crowd to cheer to the antics of arch-kook and supreme quipster Robocop as he cooks with 100% accuracy. Frequent special guests include Dick Jones, Clarence Boddicker, and Officer Ann Lewis.

Place all ingredients into a mixing bowl and then leap screaming over a conveyor belt while shooting a Cobra Gun.

It Came From Below

Concept: The cast of mediocre box office performing underwater horror film "Leviathan" reprise their roles only this time it's in a kitchen at the bottom of the ocean. The gag? Well, they have to cook a recipe that will please a Biblical monstrosity consisting of tentacles and a bottomless desire for human flesh all the while their kitchen is at risk of succumbing to the pressures of the murky depths. If they fail they will be replaced with the cast of "Deep Star Six" sans Peter Weller who is already slated to appear in "Cookin' In Old Detroit." 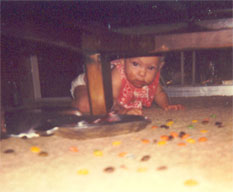 Little Charisma works on a Stomped and Saliva Covered M&M Salad.Concept: Ten kids, one kitchen, one refrigerator full of the freshest ingredients TV money can buy. Totally unscripted, this sort of reality cooking show is both a great way to get delicious recipes and a whimsical way to see just what your kids really want. All parents must sign waivers prior to taping that ensure FoodTV will not be held liable for any injury resulting from the show.

Throw potatoes against wall while screaming

Take the wrappers off of 12-18 suckers and then discard them on the floor for approximately an hour while children trample on them, then pick them up and place them in pot with smashed potatoes.

Lean over a pilot light until your hair catches on fire and then scream and shed burning hair into the pot.

Serve with a cup of tap water thrown on the floor and then run away crying.

May contain whole live cat depending on availability and taste.

Concept: A totally in-your-face look at gamers and their favorite recipes. While two gamers are preparing a meal two others will be shown playing hip and current online games like "Command and Conquer", "Doom II", and "Prey". Then the two gamer chefs will serve the meals to the other two gamers and their cuisine will be rated either "Fragged" (bad) or "Telephone Fragged" (good) in hip gamer lingo. They will also provide a running commentary and tell it like it is in the way that only disenfranchised teens can.

Eat Funyons while playing Rocket Arena, occasionally pausing when the mouse gets too greasy to wipe your hand on the towel.

Hopefully FoodTV executives will heed my sage advice and finally stop airing that one episode of Emeril where he gets all pissy with the audience, repeatedly calls Doc a "stupid nigger", and throws a pan of boiling oil on one of those smug fucks sitting at the counter. Seriously, as funny as it was when Doc stabbed him in the chest with a drumstick I am really goddamn sick of that episode. Bam indeed, good sirs, bam indeed.