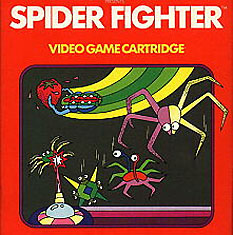 It starts with one thing, I don't know why, it doesn't even matter how hard you try. Keep that in mind I designed this rhyme to explain in due time, ALL I KNOW!Spiders are mankind's primordial enemy. For eons their soulless black eyes have stared at us from the shadows, their venom dipped mandibles clacking like pea-sized turtles flung against a brick wall. Covetously they considered the rise of our civilization. Our plentiful foods, our super models, our Infinity J30s, all were regarded with envious black eyes. They were here before us, and they will be here tens of thousands of years after us, the inheritors of our great legacy. Fortunately, until the day that the spider queen rises from the sea at least, spiders remain our fictitious primordial enemies. And oh what enemies they are!

This year's E3 is winding down and the talk of at least one of the towns has been Doom 3, no big surprise considering it's the sequel to a legend of computer gaming and it looks like a bucket of malted awesome. However, during all the gratuitous showings of creepy game footage a sobering factoid emerged; Doom 3 features spiders. Severed zombie head spiders to be sure, but they had eight legs and they looked ready to come running in swarms and possibly spray bio acid. It's distressing evidence that yet another game's design team apparently had the following conversation.

Developer 1: We've got zombies, mega zombies, robo-zombies, dog zombies, mummy zombies, I don't know what else we could possibly cram into this game.

Developer 2: We need something original and creepy.

Developer 1: You know what I find creepy? Spiders! We could have spiders in the game.

Developer 2: Yes, even though they don't fit with anything else in the game we can't deny the fun factor of fighting massive swarms of spiders.

Developer 1: Yeah, and we can have a spider queen and bigger spider soldiers that spit acid, just like in real life! 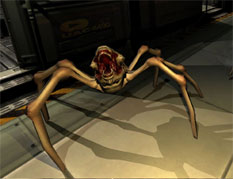 Thanks ID Software, your fantastic looking game sure needed some spiders!For those of you not in the know, spiders are a staple of almost every gaming genre, and they are never fun to fight. Ever. Yet for some reason developers keep cramming the fucking things into every title they can come up with. These video game spiders can come in a number of different shapes and sizes, but they share several traits which will allow you to easily determine whether or not you are doing battle with the most dull and clichéd gaming bad guys of all time.

Step One: Are you pissed off? If "yes" continue on, if "no" then you crashed to desktop.

Step Two: Are the creatures scurrying around rapidly with seemingly no purpose and doing almost no damage? If "yes" continue on, if "no" then you are fighting a video game crate or barrel.

Step Three: Are the red ones tougher and/or larger than the green or yellow ones? If "yes" continue on, if "no" then you are fighting a video game zombie.

Step Four: Is there a queen somewhere around? If "yes" continue on, if "no" then you are fighting turtles from a Mario game.

Step Five: Did your frame rate just drop because there are over 500 of them on screen at once? If "yes" continue on, if "no" then you were just attacked by Cliff Racers again in Morrowind and your frame rate was already low.

Step Six: Do some of them spit acid or shoot webs? If "yes" then congratulations, you are fighting spiders! If "no" then you are watching a Power Point presentation about ants.

I hope that helps you get yourself out of a sticky spider-related situation in the future because this year's E3 proves spiders are a hotter commodity in video games than ever before. No less than nine games were announced that prominently featured spiders! Doom 3 might have stolen the spotlight from these little arachnid go-getters with its flashy graphics and zombie head spiders, but I like to give a little attention to the underdogs. That's why I would like to introduce to you three of the hottest upcoming spider-related games!

The Sims: Hot Vacation Spider Date
Release Date: Fall 2003
Company Line: We know what you're thinking, "hooray another Sims expansion", well this one is more than another half-assed cash in on our only lucrative franchise. This time the life simulation is fast and furious! The entire town of Simsville has been infested with spiders, spiders that try to kill or try to love depending on how you treat them. Can you exterminate them all or win the heart of their all-powerful hive queen?
The Buzz: Despite claims to the contrary this expansion will actually be another half-assed cash in attempt on the lucrative and immortals Sims franchise. Sure there will be mini-games where your annoying blabber speaking alter-ego has to stomp spiders or go Orken on some spider nest, but mostly you're just going to watch him piss on the floor. Let me rephrase that, you'll watch him piss on the floor next to SPIDERS!! The extra exclamation mark is sarcastic.

NBA Spider Jam 3
Release Date: January 2004
Company Line: Yo! Spider Jam is back with a fresh and totally off-the-hook basketball street jamming experience. Hit the blacktop and use your amazing spider powers to fire acid or webs at your opponents. You never knew basketball could be so insane until you saw a red wolf spider do a 360 slam dunk and shatter the back board and the back board is made out of wood! DAAAAMN!
The Buzz: Damn it feels good to be a spider. Flossin and flexin with so much bling all over they grills they be callin' their mandibles icicles! Ahem, NBA Jam is a good game for those of you who enjoy basketball, unfortunately when you replace all the players with spiders the fun just leeches away. 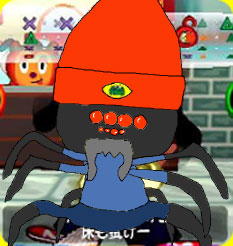 Blood for the blood god.Release Date: Summer 2004
Company Line: Rasp, clutch, envenom, it's all in the rhythm! Fan favorite rapper and dance master Parappa returns from Spider Island after being mutated by the venom of the spider hive queen. Now he has to use his newfound spider powers to save Rock Highschool from the swarms of evil spiders that have set upon it. Only a great soundtrack from a bunch of Japanese pop bands you've never heard of and your skill at rhythm games can save it!
The Buzz: You know how retarded it is to kill spiders in video games, so why would you want to play as a dancing cartoon spider monster? You won't unless you're one of those annoying cockqueens who rabidly consume anything from Japan. At least this game won't have a hackneyed plot about saving the environment or some overly long political intrigue that reads about as deep as a pan full of Sailor Moon fan fiction. Tuxedo mask, we have to save the kingdom from the duck soldiers and an androgynous villain with blue hair and an exposed concave chest. Oh, I'm sorry, is my hostility showing? Let me tuck it back in.

On a serious note if you're a game developer and you're reading this and you have ever been responsible for including spiders or spider-like creatures in a video game please e-mail me. Include your name, address, and hours when you are usually asleep so that I might sneak into your house and pour lava down your throat. You truly are a lazy and uninspired son of a bitch.

Howdy everybody, this is somebody other than Zack introducing the new installment of Phriday fresh from the SA Forum Goons. This week, like so many recent weeks, involves movie posters. If not for the fact they are funny, I'd be all in their face with, "hey, stop doing that." This week the deadly fine print is that all these movies are named after bands, musicians, and bands that are comprised of musicians. As odd as this sounds, it works. So hey, accept it and move on. If you click here all your sins will be forgiven.