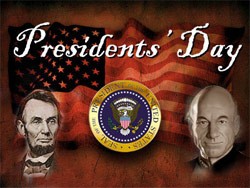 In case you were wondering why the mailman did not show up today with your box of dog fighting DVDs and Valpak full of furnace repair coupons the answer is that it is one of America's many lesser known holidays. Or you aren't from America, one of the two.

Here in the USA today is Presidents' Day, also known as Lumberjacks' Arbor Day, and Americans from sea to shining sea have hung their trees with bunting and put the inflatable George Washington in the yard. Every year parades and festivals are held to celebrate our many Presidents and their histories. We recall Warren G. Harding and his love of ponies or Ulysses S. Grant's habit of asking a question and, when answered, spitting into the open mouth of the person speaking.

We even celebrate Herbert Hoover, idiot president, who sunk our economy into the Great Depression. The same Hoover who in a fit of pique declared a goat to be Secretary of the Navy, the first of many appointed goat secs. [1]

Sadly, on Presidents' Day we do not remember or celebrate every President. I am disappointed each year that comes and goes with no mention of President Purdue Mant.

I'm sure even you are wondering, "Purdue who?" 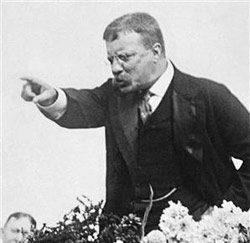 Roosevelt was never fearful of a challenge. Purdue Mant, Purdy to his friends and family. Purdue Mant was America's 26.5th President of the United States and almost entirely lost to history.

The year was 1901. President Teddy Roosevelt, also known as the Lumberjack's President Roosevelt, was just settling into his first term with a whistle stop tour of America's roadhouses and lodges of the middle west. His adventures on these tours were famous. He once shot a thousand swans with a single load of pellets from his gun and roughed up a beaver he mistook for a bear.

Teddy was also known for his appetites after a hard day's bull moosing and could put down an entire boar equal to ten-hundred slices of back bacon. Teddy was so boastful of his feasting he challenged a man in Saskatoon to an egg eating contest with the stakes being the Presidency. The man was an unqualified Canadian and lost anyway, but Teddy so enjoyed the competition that he declared the challenge open to any man would dare confront his egg devouring talents. For many years hence none questioned his skill.

The year was 1908. President Roosevelt was wrapping up the second term of his highly bully presidency with his seventh tour of bawdyhouses of the middle west. After a long day's trekking and firing off of guns Teddy found himself back at the lodge and face-to-face with the local drunkard, a die-hard Alton B. Parker supporter. The man leveled a number of insults at Roosevelt and was plainly a fool. Roosevelt did not seem to care and was taken by the man's left eye, which he described as, "Slanted as a housecat's and demonstrating a cyclopean cleverness." 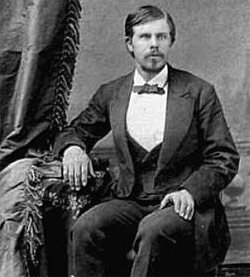 Purdue Mant might have been ignored were it not for his cat eye.That man with a cat's eye was Purdue Mant, town drunk of Jenningsborough, Kentucky. In a fit of anger he threatened to punch up Roosevelt's nose until "it's no differ'nt from an ass." Roosevelt only laughed at such insults and clapped his hand on Purudue's shoulder. Incensed, Purdue challenged Roosevelt to a wrestle. In the contest the cat-eyed drunk proved the exact equal of the President, a feat hardly matched in public record. Further challenges followed, of dexterity, drinking, and rhyme-saying. Each time the growing crowd judged Purdue to be Roosevelt's exact equal.

Seeing no alternative, Roosevelt challenged Purdue to an egg eating contest despite the incredible stakes. Each man ate so many pickled eggs that no more could be found in Jenningsborough. Women boiled up all the chicken eggs in the town and Purdue and Roosevelt ate these as well. Both men were belching and dizzy with egg-fever, but neither would relent. The town's children went searching for birds' nests and brought back sparrow and crow eggs. These, too, were boiled and eaten and still there was no winner.

The Vice President, whose name no one remembers, suggested that a draw be declared. Roosevelt punched him unconscious and kicked him into a sewer ditch, demanding more eggs to solve the crisis. Fish eggs were carted in from Rivertown and frog eggs from Laketown. Even insect eggs were delivered fresh from Swarmsville. These were all gulped down using salt crackers, yet still Purdue kept pace with the President. 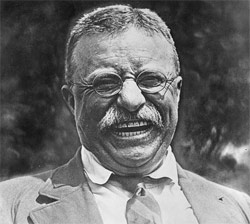 Roosevelt's stone teeth seemed unstoppable.Finally the only egg that remained in all of Kentucky was brought in. It was the petrified egg of an extinct bird beast called a moa, taken from a museum of horrifying history. The President believed this would solve the tie, for his teeth had been stoned by a dentist in 1903. Before Roosevelt could take his first bite, Purdue Mant snatched up the moa egg, large as a boulder of medium size, and swallowed it whole.

A parade greeted President Mant in Washington. Confetti and flowers landed beside his coach as he rode with the defeated President directly to the White House. An egg dinner and full swearing in ritual was conducted in the Presidential Temple. Upon taking the office Mant signed a proclamation declaring an end to personal caprice, one of the chief platforms of Alton B. Parker. This declaration negated the ability of the President to usurp the constitutional processes, including those related to the election of Presidents.

And thus President Roosevelt was returned to power less than three minutes after officially forfeiting the seat to President Mant. George Washington is often credited with setting precedents that prevented a concentration of despotic power in the hands of a single President. I say Purdue Mant deserves equal credit. When he had the power he took back the White House for all the egg-sucking Parker supporters of Jenningsborough, Kentucky and prevented all future Presidents from gambling away the White House to a man with the left eye of a cat. 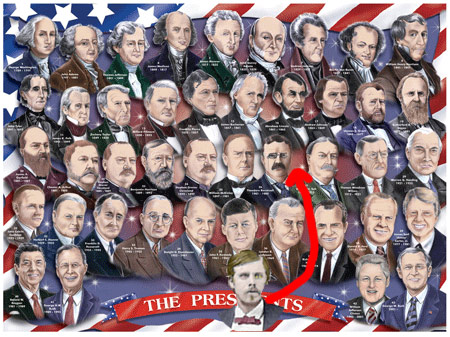