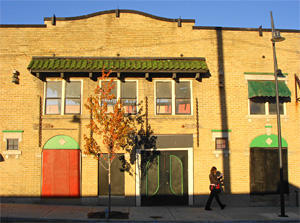 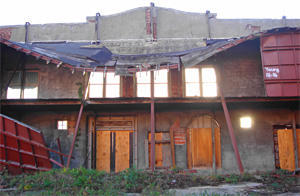 Kansas City bills itself as the "City of Fountains," and indeed there are fountains spouting everywhere, appropriately useless and wasteful. It also boasts "more boulevards than any city than Paris" (Paris, known mostly for its roads!) due to the aforementioned Pendergast concrete monopoly, and those streets are constantly clogged with traffic, because Kansas City lacks modern public transportation. Light rail might have succeeded at the polls were not its primary champion the somewhat deranged Clay Chastain, who tried to package it with urban gondolas. Chastain did "succeed" at getting Union Station renovated, as documented in his book Tilting at Windmills: How one man battled political power to save America's grandest train station. However, Union Station just sits there, looking pretty and hemorrhaging money without any visitors, mostly because it's a fucking train station.

If one were to leave Kansas City, the train station might be the best option, because the airport is like six hours away, in a desolate area populated entirely by people who just decided to settle at the end of their epic drives instead of enduring further travel. This charmless structure greets incoming travelers with the message "enjoy your stay in our soul-deadening prison!" Outgoing passengers get the feeling they've just escaped their sentence.

But I'm not going anywhere. Those wonderful dining establishments enable me to eat away my loneliness with regularity. Also, the city's minuscule price of living has allowed me to rent gorgeous, spacious apartments for a monthly fee that wouldn't pay for a hamburger in a real city. Besides, this weekend offers Kansas Citians an opportunity to welcome a group of people even more marginalized than ourselves, a gathering whose ostracization stems more from its preferences, appearance and hygiene than its geographical destiny. See you at Naka-Kon!