Let's Look At The Damn Tote Board! 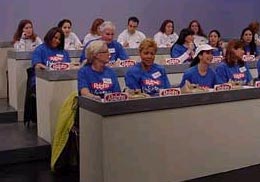 Operators are standing by to telethon the fuck out of you.One of the most fascinating oddities of our modern world has got to be the telethon. Quite simply, the telethon is a long, grueling marathon of awkward moments held together by washed up celebrities, generous businessmen handing out gigantic genetically enhanced checks ten times the size of normal checks, and a lot of desperate pleading for your money and table scraps. The goal of the telethon is simple: earn lots of scratch. Telethons do often accomplish their goals, but it comes at the high cost of interrupting your regular television viewing, leaving your favorite shows on hiatus for some spirited begging and panhandling. I didn't even mention that most telethons seem more like a car wreck inside of a zoo. You're stuck gawking and no matter how hard you try to turn away, the parade of bloodied monkeys is just too entertaining not to watch. If that isn't a hilarious enough visual, allow me to raise the stakes. In reality, you're one of those bloodied monkeys. Unlike in the movie "Project X," Matthew Broderick isn't going to come save your ass either. The only hope you have of surviving is changing the channel or outlasting the telethon. If you're a shut-in like me, you depend on television's nurturing radiation to keep your internal organs free of cancer, so turning the TV off is not an option. Changing the channel is a huge challenge; especially if you have to reach for the goddamn remote or dig it out from one of the vast folds of fat that encompass your body. I think I just successfully murdered this paragraph, so let's move on!

As I mentioned, the goal of the telethon is to make cold hard cash. What's this cash for, you ask? To keep whatever organization that's holding the telethon afloat. Usually it's some disease fan club like the Muscular Dystrophy Association earning money to help kids suffering from muscular disorders. That's a noble cause, but then the road to hell is paved with noble causes (and also with asphalt, so the ride is smooth and enjoyable). The problem is that they snatch up a huge block of programming and then fill it with celebrities who, for all intents and purposes, have been dead for several years. Sorry but any disease that Carrot Top donates his time to help eliminate is probably not worth curing. Maybe it was before Carrot Top got involved, but certainly not after. What's worse, I fear that Jerry Lewis and his madness may jump out of the TV screen and punch me in the cornea. Curing diseases and providing Jerry Lewis with a vehicle to molest the very foundations of your soul is only one kind of telethon, though. Sometimes local low budget TV stations hold telethons so that they can pay their staff to continue producing shitty and thoroughly horrifying programming to fill the thirty minutes of the day not occupied by reruns of "Bonanza." Those are usually entertaining, because you can watch some champ from a nearby furniture store ramble on about how wonderful the cause of providing the community with quality broadcasting options is while constantly looking six inches to the right of the camera.

Those are only two types of telethons, though. There are literally an infinite number of things a fellow could do with the telethon format, but they almost always seem to be for one of the following causes:

Raising money to proliferate the spread of quality original broadcasting and reruns of "Bonanza" pumped out around the clock to the point where you're shitting Hoss and pissing Little Joe.

Raising money for the victims of gamma rays and those injured by gamma ray induced violence. Banner's Syndrome injures hundreds each year.

Raising money for other telethons, creating an endless loop that swallows reality whole.

Raising money for victims of a major tragedy via an endless conveyer belt of soulless celebrities making calculated appeals for your money.

Raising money to insure the Word of God can be delivered with great zealousness through your local Christian station. I mistakenly donated money once thinking that my God, Thor, would be represented.

I briefly mentioned some of the shitty guests who show up on telethons, but I merely licked the tip of the iceberg. If you watch a telethon, you can bet your knickers that one of these kooky characters will show up:

The Former Olympic Athlete
The Former Olympic Athlete is thrilled to be helping out this great organization because they have been touched by so many bright, beautiful people afflicted with this terrible disorder. Also, they're trying desperately to fill the hole that is no longer being plugged by giant paying audiences and thrilling athletic accomplishments. 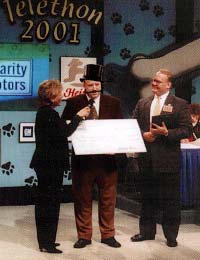 Something tells me this dastardly businessman is presenting a fake check.

Evil CEO With a Heart of Gold
The Evil CEO With a Heart of Gold will usually make an appearance to tell everybody how delighted he and his evil corporation are to support such a wonderful cause that enhances the lives of so many. He will usually come bearing a check so outrageously oversized that it's obviously fake because there is no way any bank would honor it. You couldn't even fit it into one of those bank tubes if you folded it twenty ways to Sunday. Only a truly evil jerkoff would derive pleasure from handing out fake checks in front of a large audience. I know I would. Heart of gold? More like heart of mold!

Guy Who Spent Last Year Begging You For Money
You can count on that asshole who called you fifty times over the year to plead with you to just give $10 or $20 or however much you can spare to make an appearance. He'll bring that fat check he and his cronies earned by calling you every fucking time you sat down to eat dinner.

Emotional Guy Making Desperate Plea
Perhaps the most embarrassing moment of any telethon is when the host or a guest makes a tearful, emotional plea for help. This is just the complete wrong way to get into my tiny atom sized bank account. Maybe it's because I'm an idealist and my ideal world doesn't involve people sobbing like girls when they ask me for money, but this is simply too much to stomach. How is replicating the social terror of a public emotional breakdown inspire generosity? Like witnessing a mime brag about his sexual conquests, seeing somebody go through a breakdown is painfully awkward and disturbing.

Diseased Kids
If it's a telethon raising money to wipe out a common disease, you can count on a lot of kids suffering from rabies or whatever to roll out in their wheelchairs and work some magic. I think I've made fun of diseased kids enough, so I'll just keep it simple and reitertate my belief that they, like all kids, should be kept in cages.

That's pretty much every telethon in a nutshell. And it didn't even take me 24 hours to reach my goals, either. The big question when it comes to any telethon is: "how do I know if I should donate my money?" Don't expect a long, complicated answer, as the solution to this equation is as simple as a special education class. You know a telethon is worthy of your money when the boom microphone operator is drunk off his ass and constantly whacking everybody in the head. Production values be damned, I want to see that my money is having a direct impact. I can't think of a direct impact more satisfying than seeing my money help pay a drunkard.