Just Shoot Me! Er, Shoot You!

Before we launch into today's inane content, let me try to sell off some of my music gear that I haven't touched in half a year. Since I simply don't have the time to spend creating "music" anymore, I have decided to sell my only true friend, my Roland XP-60. It's in perfect condition and has four memory expansion cards (House, Vintage Synth, Techno, and Hip Hop). I'm asking $900 for the keyboard and $150 for each expansion card. If you're interested in purchasing the entire package, I'll take $100 off and sell it for $1400 total (buyer pays shipping from Seattle area). Here's a quick pic:

In addition, I am also selling off my Yamaha MSP5 Bi-Amplified Monitor Speakers for $200 each. Both are in perfect condition. Here's another oh-so-dreamy photo:

Drop me an email if interested. Help support SA and keep us off the streets because the streets are quite hot and we can't afford decent shoes.

Just Shoot Me! Er, Shoot You! 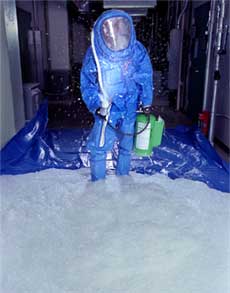 This image came up when I searched for "media" by using the media-search engine Google. As you can see, this man is awfully excited.

The media plays a major role in all our lives. For example, you'd be hard pressed to find a television show, movie, or song that doesn't involve the media in some way or another. If you are stuck in traffic and find yourself staring at a billboard advertisement for Diet Red Big Blue Pepsi Fusion One, you are driving with the media. When you go to the bathroom and read the latest copy of "Ceramic Turkey Hunting Magazine," the media is in the bathroom with you, silently observing you and listening to the horrible sounds your ass is producing. It is nearly impossible to escape the media these days, even if you have an invisible rocket-jet car that can tunnel underground and shoot laser beams. Many people realize this and think to themselves, "well gee self, since the media is everywhere, I obviously must be influenced by the media in every possible way!" These are the same people who bring lawsuits against gun companies complaining that they bought a handgun and proceeded to shoot themselves in the arm because it didn't explicitly state "DO NOT SHOOT YOURSELF IN THE ARM, STUPID" in the manual. As you can see, guns, idiots, and the media don't mix well, which can be illustrated in the following article:

Court won't revive suit against entertainment companies in Carneal killings - A federal appeals court yesterday refused to reinstate a $33 million lawsuit blaming entertainment companies for a 1997 high school shooting spree in McCracken County that left three students dead. The suit claimed the makers of video games, a pornographic Internet site and a movie studio were responsible for the slayings because they exposed the gunman, Michael Carneal, to violent and sexual images.''We find that it is simply too far a leap from shooting characters on a video screen (an activity undertaken by millions) to shooting people in a classroom (an activity undertaken by a handful, at most),'' Judge Danny Boggs said in the ruling.

This ruling was a major win for media outlets across the world, protecting them from frivolous lawsuits and keeping retards like Lieutenant Colonel Private General President Dave Grossman away from the courtroom at all costs. Dave Grossman is one of those people who would go to Dairy Queen and purchase some chocolate ice cream, decide he doesn't like it, and then proceed to write books and launch campaigns aiming to make the consumption of chocolate ice cream illegal. He would naturally link chocolate ice cream to death (statistics prove 100% of all people who eat chocolate ice cream eventually die) and would appear on "Good Fucking Morning Already America, You Lazy Slobs" on NBC where Katie Couric would ask him hard-hitting questions like "how are you?" and "what do you do?" Then he'd fade back into obscurity until some morbidly obese man is found dead of cardiac arrest in the same room where he once ate some chocolate ice cream three months earlier.

While Mister Captain King Prime Minister Dave Grossman's career as a whining "expert" witness may suffer from this ruling, we, the media, are more than exuberant to take advantage of this opportunity. We no longer have to fear lawsuits from insane individuals with far too much spare time and not enough brain cells; we're finally free! That whole silly "freedom of speech" thing has finally been pushed in the correct direction and we, the media, are now able to bring you, the non-media, products and services that we were previously afraid to offer due to frivolous legal threats! Get ready to shift the station wagon of your soul into high gear because Something Awful is heading in new and exciting directions during this year's "Something Awful New and Improved Product And / Or Service ExpoConEventConCon 2002!"

Handi-Capped - Your suburban housing district is being invaded by handicapped people who are living in various homes which could've been better occupied by non-handicapped people! They're taking up all the great parking spaces at the mall and demanding nearby stores spend hundreds of dollars to construct complex concrete ramps! Grab your hunting rifle and head outside to battle the handicapped menace by shooting as many of these dastardly disableds as possible. Highly advanced "locational damage" means that blows to their head will do much more damage than shooting their arms (if they have any) or legs (if they have any). Once you've murdered the handicapped person and anybody living with them, run over and collect the hovering disabilities check that can be used to purchase exciting powerups such as the Spiner Scope or wheelchair-jamming tire iron.

The Great Rape Escape! - Inspired by the countless number of Lifetime Network movies which suggest five out of every three men are rapists, "The Great Rape Escape!" puts you in the role of Miss Sarah VonSisterhood, an innocent schoolteacher in southern Georgia. Can you guide her to the mall without getting raped by the hundreds of roving horny men who think about nothing but forcing sex upon any woman they see? Probably not, which is why we made the rape scenes as hilariously explicit as possible! Although the mall is only 100 feet away from her home, the advanced computer AI will have rapists hiding in nearby bushes, trees, mailboxes, and air molecules along the way.

America's Funniest Race Riots - Minorities are encouraged to incite and film uprisings against white-controlled businesses in their area. During each clip, celebrity host Rodney King makes sidesplitting remarks such as "now I guess that's what you call 'white-out'!" and "looks like those guys were wronged by those guys that were 'white'!" and various other inane plays on words that all center around the word "white." Most shows will be either taped during Rodney King's parole or live from whatever correctional institution he's locked in.

Hey Kids! Drink Antifreeze! - The benefits and virtues of drinking gallons of antifreeze are promoted in this educational cartoon aimed at children who are somehow still living. Zany characters such as "Mary the Antifreeze Drinker" and "Joe the Antifreeze Drinker" engage in madcap antics each week, traveling from colorful places such as "Drink AntifreezeLand" to "Drink AntiFreezeVille." Once the show gains popularity and momentum, action figures of the starring characters will be sold in select auto part stores across the globe. Each figure will contain a gallon of antifreeze and come with either a flexible straw protruding from their head or a hypodermic needle that directly injects the antifreeze into your body.

These are just a few of the upcoming new and improved products and / or services we'll be offering in the near future. What are the other ones? Who knows! I just now realized this article was a terrible idea and I'm ending it immediately because I hate it so much! If I didn't already loathe myself enough for creating this stupid update, I would profusely apologize to anybody who has read to this point! I'm heading off to beat my fiancé in some violent video games and then proceed to beat my fiancé with my fists! So long, suckers!

Zack "Grape Excavator" Parsons here, and I bring an all new SA Story Time humbly to your doorstep. Since I received 50 flame mails and 5 positive e-mails about the last installment, a record-breaking 10:1 ratio, I have decided to continue the feature. This week, I took a dive into the crackpot sub-genre of "Illogical Time Travel" books!

"Yes mortals!" Laughed Doctor Sinisterest pulling off the false beard and throwing it in George Washington's face. "You will discover the real Lincoln unconscious in his bedroom, but it's too late!"

"You monster!" Shouted Daring Armstrong as his violent outburst flung his felt tri-corn hat from his well groomed hair.

"That's right," laughed Doctor Sinisterest even more loudly, "but this monster is a Founding Father, making me heir to the American presidency in our time!"

If you think you have the brain power to follow this extremely scientific tale of time travel and political intrigue, then check it out. If not, I would direct you to any of our other features that no doubt make about five million times as much sense.