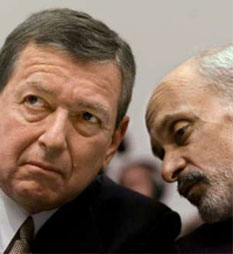 Jealous of his brother's success in film, Jon Malkovich's older brother gives Ashcroft some hot TIPS.America's knees are still a-knockin' about terrorism almost a full year after the September 11th attacks despite the fact that the government is doing all it can to turn the United States into an oppressive and creepy police state. With the creation of "Operation TIPS" by the Department of Justice the government recently took another step towards encouraging Americans to report "anything suspicious" about their friends and neighbors. One of five components that make up the hokey sounding "Citizen Corps", which I think is itself is related to the equally gay "Office of Homeland Security", Operation TIPS is basically a system designed to find terrorists of all walks of life. It is supposed to accomplish this by receiving and processing tips from private citizens throughout the United States.

Operation TIPS, administered by the U.S. Department of Justice and developed in partnership with several other federal agencies, is one of the five component programs of the Citizen Corps. Operation TIPS will be a national system for reporting suspicious, and potentially terrorist-related activity. The program will involve the millions of American workers who, in the daily course of their work, are in a unique position to see potentially unusual or suspicious activity in public places.

While not exactly the big brother we need to protect us from the tiny bullies on the block, it's a step in the right direction, and I'm all about doing my patriotic duty for my country and contributing my share. To assist Operation TIPS I have just now in my apartment created Operation HELPS, an agency administered and created by me and dedicated to getting me to send tips into Operation TIPS and generally thwarting terrorism. It is one part of my "Awesome Brigade" and I think it's somehow related to my "Office of Bathroom Security".

I have already prepared a number of tips that I feel will greatly reduce the threat of terrorism in the United States. 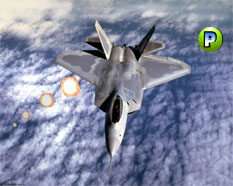 Tip 1: Collect All Power Ups to Increase Shot Power - While the United States is using an impressive array of high-tech weaponry in the war on terrorism, they are leaving behind or otherwise ignoring a number of power ups floating in the air which would allow them to double or even triple their shot power. For example if an infantryman picked up a glowing tri-shot power up he would be able to fire in three directions simultaneously, bringing down even more Al Qaeda terrorists with each pull of the trigger. Tanks can pick up the mortar power up which would allow them to fire over trees and walls at terrorist buildings, or upgrade to the ion laser, which produces a destructive beam of energy that can pass through several soldiers all at once. Most shocking of all is that the US Air Force has completely ignored dozens of mega bomb power ups which, when activated, would instantly vaporize all enemy troops in visual range.

Tip 2: Plot to Blow Up the Statue of Liberty - There are six or so children of Hispanic descent who live near me and like to play soccer in the alley behind my apartment that just happens to also be where the parking spaces are. They are frequently blocking the alley off with their shenanigans and I have seen them kick their ball into cars parked back there on multiple occasions. I also believe they are a cell of Al Qaeda and I think I heard one of them talking about blowing up the Statue of Liberty, so please come and arrest them or at least take their soccer ball.

Tip 3: Yelling Woman - There is a middle-aged woman in my neighborhood who is always accompanied by a large and muscular man. She is almost always screaming in some foreign language which I presume to be Al Qaeda code talk. The muscular man is no doubt some sort of body guard and the groceries she is sometimes carrying probably contain the components to make a "dirty bomb". Once she assembles this dirty bomb I am positive she will attempt to detonate it in the white house, or possibly with the help of the soccer playing urchins, inside the Statue of Liberty. 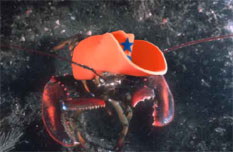 Two damning signs for Operation TIPS: this lobster is obviously a shellfish and is wearing an oversized foam cowboy hat.

Tip 4: Racial Profiling - The following people should not be considered terrorists: white people, Cairn terriers (unless they are wearing pet clothes), some cats (Tabbies are okay, Siamese have ties to the Al-Aksa Martyr's Brigade) and fish (most fish, although shellfish has a questionable racial background). Everyone else should be considered a potential threat to national security. The centipedes that infest my apartment should be considered public enemy number one.

Tip 5: Wasps Sow the Seeds of Aggression - The ultimate terrorists, the wasps and their allies in the beehive and the crimson jihad organizations are set on ruining American picnics, brisk walks near dumpsters, and naps with a glass of lemonade. They will infiltrate America's soda cans left unattended and then cunningly sting deep into the roof of Lady Liberty's mouth when she attempts to take a sip of sweet, carbonated democracy.

Tip 6: Hem Lines Are Too High - I mean seriously, have America's morals decayed so much that we actually approve of this walking gynecology exhibit we see whenever we go to a mall, beach, or daycare? Are we going to sit idly by while terrorists influence nubile teenage girls into raising their hemlines scandalously close to the mid-thigh mark? I'm looking at you Rene Harper, age 15, your collusion with these terrorists elements has placed a time bomb in my pants and you don't want to stick around and see it explode.

Tip 7: Violent Video Games - Everyone knows that violent video games like "Mappyland" and "Where in America's Past is Carmen Sandiego?" encourage our youth to commit violent acts. I propose that the Department of Justice needs to investigate another, darker, connection between these violent video games and the scheming terrorist element that has insidiously inserted its tendrils into video game development houses. Even I nearly succumbed to the influences of violent video games! After playing only three hours of Peter Molyneaux's "Black and White" I attempted to pick up my family and throw them in the ocean. There's a guy you should investigate, that Peter Molyneaux went from creating great games like "Syndicate" and "Syndicate Wars" that endorsed the American Spirit to making hideous trash heaps like "Black and White".

Tip 8: Awesome-Ah Bingcherry - Ben and Jerry's has never been one of the more patriotic companies operating in the United States. Those liberal fruitcakes and their draft dodging stoner ice cream have gone a long way towards eroding America's nationalism and infecting us with their fattening delicious flavors that make us easy prey for lean killing machines like Al Qaeda. Specifically their "Apple Crumble" flavor is a bomb dropped directly on America's waistline, so delicious and full of sweet streusel and fresh baked apple. I suggest shooting them in their beds at night, unless they are just figureheads, in which case launch an air strike on their corporate offices and confiscate all of that ice cream.

These eight tips are just a start for Operation HELPS and I look forward to many years of assisting Operation TIPS in their goal to get every American spying and informing on every other American. Hopefully I will be able to rid this country of terrorism, pesky neighbors, and centipedes, all with a few phone calls to the Department of Justice. My commitment to securing our nation's freedom from terrorist aggressors has driven me to work, with the help of Lowtax, on developing several other anti-terrorist organizations.

Operation BAPS - I don't even know what BAPS stands for, but the operation centers on convincing black women to air-drop into the Mid-East wearing crop tops and hot pants and then do that booty shaking dance in conservative Muslim cities.

Operation HATS - The 24 hour HATS phone hotline will allow normal citizens to call in if they spot someone wearing a suspicious hat. The most suspicious hats include: top hats, panty hose, ski masks, oversized foam cowboy hats, and miters.

Operation LUCKYDUCKY - Terrorists will be told that they have won a free trip to the Caribbean, all they have to do is report to our LUCKYDUCKY Cruise Vacation offices. When they show up they will be apprehended, hog-tied, and thrown into the ocean.

Operation OPERATION - We haven't worked out the specifics of this one yet, but we know it involves the classic board game "Operation" and a busload of sobbing children.

Operation DUMBO DROP - To extract information from potential terrorists, they will be given a drink from our DUMBO DROP labs. The drink will contain a powerful hallucinogen. While the responses to interrogation such as this will never hold up in a court of law, that doesn't really matter since suspected terrorists are about as likely to get a trial as an ant that just bit your leg.

If you have any suggestions for other ways that we American go-getters can take the fight to the terrorists living in our cities, then don't hesitate to e-mail me or call your tip into Operation TIPS!

Hello humans, Livestock here to tell you that the new Photoshop Phriday is online. This week's exciting theme is CD covers. Be sure to stop by and see what the goons cooked up! Here's a treat: 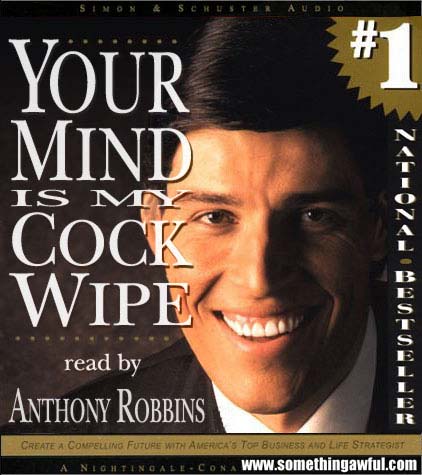