Moby is a Dick

The music industry easily at the lowest point it has ever been. Each day, the radio waves of America are infested with a combination of terrible pop quintets, rappers who rap about rapping with other rappers while wrapping things, rock groups whose most inspired lyrics could pass for a LiveJournal entry, and that terrible "Hero" jingle from Spider Man which sounds like it begins midway through the damn song. It is a sad state of affairs, and the situation doesn't look like it's going to get any brighter in the near future. It is utterly stunning, bewildering, obnoxious, and it can certainly can be described with a variety of other stunningly, bewilderingly obnoxious space filling adjectives, should I insist on making this sentence even longer and more grammatically terrible. Just by taking a look at the most recent Billboard charts, you can see how bad things have really gotten...

Obviously, the airwaves are overridden with total crap, and distinctly lacking in cornerstones of music such as Barber Shop Quartets, Asian cellists, and fancy looking guitar virtuosos draped in leather. It's no secret that Pop music somehow garnered massive popularity, possibly through witchcraft or by cleverly deriving its name from the word "popular." Either way, it seems to be the most prevalent form of music, despite the fact that it's only enjoyed by ten year old girls and creepy old men who use it to lure ten year old girls to their windowless vans.

While Pop music is undoubtedly terrible and doing far more harm than good, it isn't the true downfall of the music of today. Beneath the surface, there are artists far more insipid and annoying than pop artists could ever be. Blame pop all you want, but the fact is that it's been around as long as the music industry has. Back in their day, Bach and Beethoven were both considered "pop," and were often showered on stage with those giant puffy pantaloons that the cave women of those ancient times wore. Nothing that pop has to offer is a new concept, so it can't possibly be what has been pulling the industry down for the last twenty or so years. To find the real problem you have to look beneath the thick, creamy layer of pop artists who floated to the top of the charts, down to the bitter, watery bovine juices of the real problem in today's music. This is, of course, the world of Faux Underground music. Many different genres and artists fall into this category, but the end product of each is exactly the same: Thousands of irritating fans who completely define themselves by the unprecedented fact that they don't listen to the bands that you do. "You" is a general term that the fans of faux underground music tend to use when describing people who mysteriously don't like their chosen type of music. Concepts like differences in taste and the idea that their favorite artist might be what industry insiders call "Shitty" are completely foreign to these idiotic fans. Instead of thinking about things from a logical point of view, many choose to think that they are smart like Steven Hawkings because they "Get" a pointless, twenty minute Radiohead song. 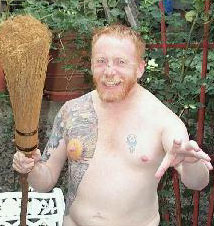 Weird Al Fan Club member 10472: This guy.As previously mentioned, there are many varying and horribly annoying faces that faux underground music takes. Some even have an entire sub-genre to themselves, such as Nu Metal or Trance Raver Techno. On the other end of the spectrum, there are the singular, lone artists who seem to control and manipulate each and every part of their obsessive fans' lives without even trying. Through working in the CD department of a large, terrible retail chain which will remain unnamed, I have much first hand experience with many people like this. There are the hip college kids who spend all their money buying and trading Dave Matthews or Phish bootlegs, who always carry a sickly aroma of marijuana and human sweat about them. Another type are the people who enjoy Radiohead or Tool to dangerous extremes. Now, I personally enjoy both bands on occasion. But to their hardcore fans, if you don't sign your immortal soul to the Gods that are Tool or Radiohead, you just don't "get it" because you are "stupid." If you truly "got it," there's no doubt in the minds of these people that you would listen to and talk about nothing but that band until the day you died of starvation because you assumed that listening to Tool or Radiohead would provide you with all the sustenance that your body requires. Then there are the unfathomably annoying nerds who aspire to be the next Weird Al Yankovic, despite the fact that he has no inherent sense of humor, musical talent, or basic grooming skill. To this day, I remain baffled by the success this particular character has garnered from his loyal army of virgin honor students. Apparently, changing stupid lyrics to even stupider lyrics is comedy zirconium in the eyes of nerds worldwide. Add a wildly humorous accordion solo, which is funny because it probably wasn't there before, and you have the icing on the zany comedy cupcake. Mentioning something sarcastic like this to his fans is a futile effort, though. They will simply point out the inherent genius of the classic Yes parody, "Boner of a Lonely Fart" and continue to stuff their pimply faces with a bottomless supply of zany regular cupcakes.

Of course, the catch 22 here is that while these people pride themselves on being an elite group of super geniuses who have the distinct ability to enjoy their particular niche artist, there are millions of others who are exactly like them. This entirely cancels out their elitist reasoning, because they are no different from the millions of people who have the same taste. Obviously, there is a reason why the artists' records go platinum and why thousands of other annoying, pretentious jackasses are able to discover these musicians each day. The reason is because so many people have heard and enjoy these artists, contradicting the reason why many of the intolerable hardcore fans listen to the band. By associating themselves with these artists, the people who are trying to separate themselves from the crowd are inadvertently joining a large crowd of people who no one would want to be associated with in the first place. This reasoning escapes the hardcore fans of Faux Underground music, and often it's not even a concept they have the capacity to think about. The sheer amount of pressure these people would have to put on their brain to understand this would certainly build until their head shattered in a massive, patriotic fireworks display of bone and grey matter. 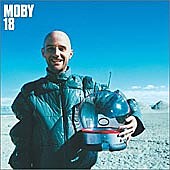 Wow, Moby, space helmets?! You're SO fucking different!Of all the faux underground music that exists today, one person stands out above the rest as the most haughty, irritating, and completely useless of the artists of this type. This one man does all he can to try to seem different, but ends up just looking conceited and whiny. This man is Moby, a person who cries for attention in the most subtle ways he can. His whole image is just a vehicle to shamelessly promote how smart he thinks he is. The subtlety is the part that is most irritating. The fact that he's so quiet, purposely uses vocabulary that a good percentage of his casual fans wouldn't understand or care to learn, and especially the fact that he is such an outspoken critic of other musicians he feels are "hateful" all go to show that he's not so much a musician as he is a smug jerkoff. A typical Moby interview is an amalgamation of self righteous crap, and pure, standard issue crap that you find in bathrooms and monkey cages worldwide...

Interviewer: So, where are you from Moby?

Moby: I refuse to eat things with a face...because I'm DIFFERENT.

Moby: That statement is hateful, like the music of Maralyn Manson and Eminem and Blues Traveler.

Moby: Check out my bald head. Isn't it different? Especially when it's licked.

Moby: Also, did I mention I'm vegan? Because I'm certainly not like you.

Interviewer: Hold on a damn second, we just went over...

And once again, I'm baffled by the way that, as Moby's fans increase in number, so does the feeling of uniqueness and individuality that runs through their terrible heads. The last Moby album, 18, went on to sell eighty million bajillion zillion copies worldwide and went ultra super extra space alloy platinum, and yet Moby fans still insist on thinking that they are part of some secret Illuminati club shrouded in shadows and untouched by the outside world. Fans like this, who do nothing but talk about and contemplate the greatness of their celestial being of a favorite musician, are always primed and ready to attack at the drop of a hat. Artists like Moby, who seemingly exist solely to promote their own uniqueness encourage this rabid, absurd behavior. Both he, his fans, and those like them are to blame for a large chunk of this hideous hell beast which we call the music industry. I apologize for ending this article on such a downer note, so to make up for it, I will perform a huge accordion solo. Since most of you are probably pimply virgin honor students, I feel that you will greatly enjoy this and it will be my apology to anyone that was upset by what I've just written. For those of you who don't care - You are who I respect most of all.

My Loins Are Ablaze For Helen Gunther!

Helen Gunther, our resident expert on anything you ask her, and at giving advice you don't want or need, has returned yet again for your benefit! But don't thank me, thank her! 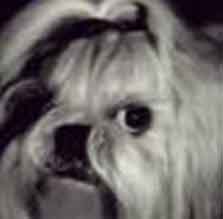 ...When I got to the house the wave of evil hit me like the time Lou accidentally backed over me with the riding mower. The dog was barking furiously and I could tell that each bark was filled with malice and that the dog was truly full of bad things. The cat was trying very hard to be good but its eyes kept doing this evil squinty thing so I could tell that I had to hurry or else the evil demons that had possessed it might take over completely. I took out my cooler and two Ouija boards and began to open cans of tuna.

No more waiting like a sissy. Go forth into uncharted territories. And don't forget to ask questions too!