The first time "fast", "decisive", and "efficient" could have been used to describe the Minecraft development team was when they snatched the $2.5 billion dollar check out of Microsoft's sweaty, shaking hand. 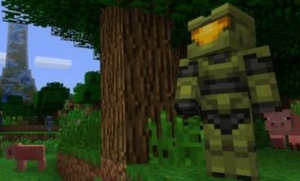 Although any given part of Minecraft only lives up to a fraction of its potential, there is just enough in place to let players stand around for hours projecting their imaginations on a game world that nods back at them with a blank stare. It's the ultimate listener. That, as it turns out, is really appealing to a lot of people.

Mojang has always seemed reluctant to make genuine progress with Minecraft, as major changes might throw off the formula they stumbled upon. As someone who wants all games to be fantastic that's disappointing, but hey, billions of dollars. Good on them.

Microsoft claims that they are going to recoup all two and a half billion dollars they spent on the acquisition by next year. All of it. This tells me that there is way more slimy shit going on in the player data market than most people suspect. Or it tells me that Microsoft is a mismanaged company with so much hubris that they expect the world to bend to their wildly unrealistic plans. Given the last three years, that wouldn't be too surprising.

So what happens now that Microsoft owns Minecraft? I've wasted an embarrassing chunk of my life playing games and following the industry, so I have some informed guesses. This is my rough timeline of events, in order from the most immediate to the farthest in the future.

Next week a frighteningly large audience continues to watch Minecraft being played on YouTube by people who either have british accents or the uncanny ability to shriek at the exact point where one might expect them to say something funny or interesting.

In two weeks a dog vomits then licks his own vomit. As he considers the taste his head tilts, eyes half-closed in the closest thing a dog has to a thoughtful expression.

In one month I begin the research process for my upcoming book, How to Not Be on Fire. The first method of not being on fire that I test: Setting myself on fire. It does not go well.

In six months a woman drops a saucer of tea. It tumbles in the air, seemingly in slow motion, then shatters.

In one year I resume research for How to Not Be on Fire. This time, I try setting myself on fire again, convinced that the result of the first experiment was tainted by the presence of a slight wind. My death is horrific and unmourned.

In five years the return of the drink-shaped chemical called Surge proves to be such a success that several new flavors are introduced, including Chocolate Surge and Vitamin-Fit Surge: Whipped Steak.

In fifteen years nature begins to reclaim the wretched workings of man. Oversized blades of grass thrust their way through cement. Thick vines buckle steel and grind brick to powder as they rise ever upward, their strange veiny leaves throbbing wetly and dissolving glass. When we attempt to remove the flora it grows back even thicker within hours so we gradually accept the new way of things.

In thirty years society collapses. We become a planet of shifting feudal states, constantly on the move, scrambling for resources.

In one hundred years a woman gets to be the host of an American late night talk show.