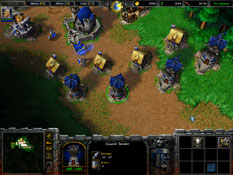 A perfect example of what not to do. Building defensive structures or units is counterproductive to the art of Battle.net.With the much anticipated release of War Craft III there is once again a good deal of non-Diablo related activity on Blizzard's matching service Battle.net. By "a good deal" I mean at any given time there seems to be more people playing Warcraft III than live in the entire United States. Any fan of Internet gaming knows that these servers inevitably become populated with people who have some sort of arcane super build order memorized and love to rub your nose in it. This is doubly impressive considering how new Warcraft III is and that I have yet to encounter a single human being in a random Battle.net game that was not an insulting jackass whose only goal is to raise their win record.

Being that insulting jackass who knows how to produce eighty mummy chimpanzee riders in the first three minutes of the game is the goal of every single person who plays. While I have not even come close to approaching this incredible height of intelligence and strategy, I know that if I continue to learn from my mistakes I will one day be in these shoes. To this end, and by example, I hope to provide all of you gentle readers with the means of expediting your rise through the ranks of the Warcraft III hierarchy on Battle.net until you too are among the legion of power-tripping rush-happy basement-living shut-ins who get their sexual thrills from clicking the Night Elf Archer over and over again.

Rule Number One: This Game Is Not About Having Fun 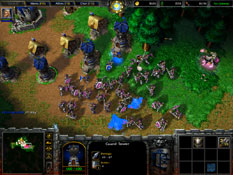 In this purely scientific and not at all humiliating example of how rushing works, my base is overrun by some 60 footmen and a hero (who was three levels or so higher than mine). Click the picture for a larger version.The purpose of playing Warcraft III online is not to have fun, the purpose is to defeat your opponent as quickly and with as many troops of the same type as possible. You should pick a single type of troop, hopefully one that you can build very early in the game, and drill at creating set numbers until you can absolutely minimize the amount of time you waste with the interface. Sure, you may think you're God's gift to Battle.net just because you can spit out 30 Footmen only 90 seconds into the game, but there's someone out there who can build 60 in that time.

You might consider building defenses, exploring the map, harvesting resources, but stop! Immediately! If you can't pull off a win in less than five minutes then you just aren't ready to hang with the big boys. 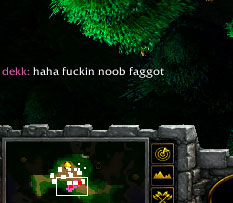 One of many barbs that sent me reeling as surely as did the rush. Click the picture for another example of a perfect rush/taunt combo.When you enter the game ask your opponent how many matches they have won. No matter what their response is type "LOL" or possibly "lol" and then remain silent for the roughly two minutes it takes you to build 50 Skeletal Hobo Wrestlers. If your opponent actually says that they are new to Warcraft III and asks you to "take it easy" then simply reply with "lol ok". Under no circumstances should you actually take it easy. When you do attack their base with your massed army begin taunting their every move as though you are amazed that someone that stupid could even install Warcraft III, let alone have an Internet connection. Here are a few you might want to consider making into text-macros so you don't have to worry about giving units orders (not that you need to) as they rampage through your opponent's base.

"lol [unit name]?!" Where [unit name] is the type of unit that they only have three of yet you have 50 of your units.

"Ur hero is [X level]?! WTF did u not creep hero? lol" Where [X level] is the level of your opponent's hero, usually 1 to 3 while yours should be no less than 8.

"Noob fag militia never stops atk" Sometimes as your opponent desperately and futilely attempts to stop your rush, he will use his worker units to attack you. This is the most pathetic thing that a player can do in your book, and that's the only book that counts.

"gg fagit" Said at the end of a game, intentionally or unintentionally misspelling "faggot" shows complete disdain for your opponent. This coupled with "gg" or "good game" is a sarcastic jab saying "this wasn't a good game, you were no challenge at all".

Essentially these are all variations on the insults offered up in Diablo II games against Koreans only you can be of any nationality to enjoy and use them. 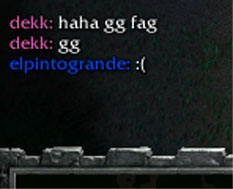 With my impending defeat, "dekk" made sure to ice the cake with yet another assault on my sexuality. Click the picture for a larger version.Select the units you want to attack with, hit "A" and then click in the middle of the enemy base. You will have to repeat these actions three or four times to get all your units headed into the enemy base since those retards at Blizzard like to make things harder for skilled players to win in under two minutes.

Note that any strategic planning beyond this is counterproductive and if you don't manage to defeat your opponent in a single unorganized massed attack then you don't deserve to be playing Warcraft III on Battle.net.

Everyone knows that the truly good players stick to custom games and that the reviled "noobs", and those who only play the game once a day or so, play primarily random games. These totals fags are playing Warcraft III under the mistaken impression that it's a strategy game designed to simulate fantasy warfare for enjoyment. You realize that it's a business that pays its dividends every time you go up another rank from a win, and these cattle are just lined up for the slaughter. Play only random games on Battle.net so you get the largest percentage of people attempting to play the game for fun. If you somehow find someone who is actually really good at the game and can counter your practiced rush, then hit the reset button on your computer so that the match counts as a disconnect and not a loss.

Even the people who can counter your rushes are total fags and borderline cheaters because there is obviously no higher order of skill and intelligence than memorizing a build order and vomiting out units. You deserve to give them a few taunts before you hit the reset button, perhaps accuse them of cheating or "maphacking".

These four rules are all you should need to get by in these early and exciting days of Battle.net, but prepared, as in the weeks to come you can expect a new style of gamer to evolve from the noobs you are currently abusing. These will be "angry rushers" who have taken your rushing skills and perverted them into a mixture of light strategy and rushing that is superior to your current tactics. They will not be afraid to combine multiple units into their rushes or to send wave after wave to defeat you, but if you are ready for this development then you are ready to rise to the top when they do.

I don't think I can do this myself, I've tried to force myself into the rigorous discipline of rushing, but Blizzard has included too many exciting units that are completely worthless in a rush. I find myself distracted into thinking about combined arms strategy, scouting, perimeter defense, and things like that, and I end up with three different types of unit getting overrun by a swarm of 50 or 60 Hobgoblin Butter Carts. Tears welling in my eyes from being called "noob fag", I withdraw to skirmish mode where at least the computer uses different types of units. I hope that these rules can save you my heartache and catapult you to the top of Battle.net!

The Truth and Nothing But!

Scotty "Scotty D" D has donned his reporter's helmet and taken a deep sea expedition to the land of Linkin Park in a brand new TruthMedia Review. As usual you can expect nothing but unbiased facts and Scotty D's review of Linkin Park's latest CD is on-the-level journalism. 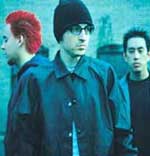 Beyond the album itself, the recent video for "Crawling" has been airing on MTV. And I must say, what crappy stuff. The tie in with the Final Fantasy movie is a stupid move, seeing how it was out of theaters months ago. And what's the deal with all those floating heads? I mean, who're they supposed to be? One looks sort of like a guy from Final Fantasy: The Spirits Within, but the rest are just totally crappy jobs and look nothing like the characters they're meant to represent. Mr. Kahn directed the video, and it's pretty obvious that he didn't know where to start. I'd say he should stick to DJing, but like I said before, he isn't very good at that either.

Be sure to share this incredibly fact-filled review with your fellow Linkin Park fans! They will no doubt enjoy the attention Scotty D has given to the details. Remember that this is, in fact, a Truth Media review, which can best be described on the Truth Media homepage:

Each and every single "TruthMedia" review in this section is complete and total bullshit created solely to generate flame mail from Internet citizens who, for some pathetic reason, have attached their egos to a movie, band, or game company. The sheer intensity that some people exhibit while defending whatever silly movie or band just boggles our minds, so this section of the site was created to prey upon these people's idiocy and use it for our own personal amusement. Flame mail from every article will be posted randomly throughout the week, and the more flame mail, the better the ranking the author receives.

So go on out there and spread the word of this review to all your insanely obsessed Linkin Park friends! They'll thank you for it later, once they've finished firebombing our homes! Oh, and to the people who claim "wah, Truth Media isn't funny!": that's the point. These fake reviews are supposed to be at least somewhat believable so we can get a lot of flame mail. So stop emailing us and complaining you "don't get it."