You're Out Of Touch With Music, Old Timer

It happens so quickly. One day you're right in the epicenter of cool music, rocking out to 30 Seconds To Mars, and the next day you supposedly have terrible taste.

No one wants to be out of touch. The thing is, when someone's finger slips from society's pulse they usually don't know it. From their perspective they're just as knowledgeable as they've always been, but everyone else can see how clueless they have become. It's a sad, horrible thing. So how do you know when the world has left you behind? How do you know when it's time to admit that you're stuck in the past?

Try this quiz. It might not be definitive, but it's a good litmus test that should give you a sense of how up to date you really are.

What did you think of Amanda Palmer's recent poem?

a. I was quite frankly shocked that an artist who cuts out the middleman to bleed gullible fans dry, demands that 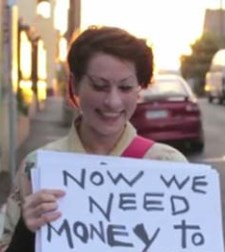 fellow musicians work for free, and responds to all criticism with delusional variations on "I'm right and you're narrow-minded" would create a poem that might have been written by a thirteen year old
b. I liked the parts that I understood because they seemed confrontational, and I liked the parts I didn't understand because they really made me think and ask myself tough questions like "what the heck does that even mean"
c. Haven't seen it but I'm going to go look it up now - I was wondering what the lady from Evanescence was up to

a. A subset of chamber music, where an even smaller group of musicians play music in a very tiny room below a trap door
b. That band with the "Headstrong" song that came out like last year or maybe two years ago
c. No, really, it's that band - they had that video with Michelle Trachtenberg and a chain link fence

My Chemical Romance broke up in:

a. 2007
b. Trick question, the Black Parade will never stop marching on
c. The middle of a crowded shopping mall when they lost sight of one another in a sea of large adults

What do you know about the current state of electronic music?

a. I'm fairly certain I read that Saliva has a keyboard now
b. Pretty much everything, I've got Napster and Winamp installed so all my music is electronic

The #1 song in the world at this very moment is:

a. Hoobastank
b. Dunno, I don't listen to rap or garbage pop
c. Did that Avril Lavigne cover of Nickelback's "How You Remind Me" for the Japanese anime movie come out yet?

Millions of girls on Twitter are still going crazy for:

Finish the following rhyme: "It would be just about insane / to turn on a radio and not hear _____"

Which of the following bands is NOT Dashboard Confessional:

What are the best alternate lyrics to Papa Roach's "Last Resort":

a. I like these Reese's Pieces / This is a nice resort
b. Actually, those are all the fake lyrics I've got
c. You have no idea how long I've been sitting on that stupid gag

Which is the greatest song in Audioslave's catalog:

a. The one that makes you fondly recall Soundgarden
b. The one that makes you wonder if you just liked Rage Against The Machine because you were young and sort of an idiot, but doesn't quite motivate you to actually go back and listen to them again since you're scared the answer might fundamentally change your self-image
c. "Down With The Sickness"

HOW TO CALCULATE THE RESULTS
If you answered any of the above questions, you are right on top of things and have absolutely nothing to worry about. Nice job!