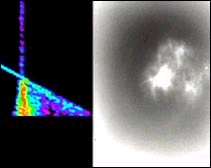 I don't know what the fuck this is, but the US Department of Defense released this to show off something about the National Missile Defense System. I think it's a picture detailing the inside of George Bush Jr.'s colon.

Bush 'pleased' by successful missile test - A target missile equipped with a mock warhead was launched from Vandenberg Air Force Base in California late Saturday. Twenty minutes later, the interceptor missile was launched from an island in the Pacific 4,800 miles away. At 11:09 p.m. ET, the two collided in an explosion 150 miles above the ocean.

In case you've been curled up in your closet hamper for the past 12 years and haven't heard of the National Missile Defense System, it is essentially George Bush Jr.'s way to get rid of incredibly destructive missiles by building and launching even more incredibly destructive missiles. The American public seems to approve of this strategy, as a recent poll revealed nearly 64% of all Americans (about 9 out of 10) felt "mildly unconcerned" about the defense system, while 41% (roughly 19 out of 4) described themselves as "moderately apathetic." This resounding support for the National Missile Defense System has caused other groups to adopt similar strategies, such as MADD (Mothers Against Drunk Driving), which is now creating "Drunkard Unit Interceptors" (DUIs) to cut down on the number of alcohol-related accidents. They hand pick a selection of college students, buy them each a 12-pack of Milwaukee's finest, and wait for them to get completely loaded. Once the college student begins talking about "how really fucking talented Dave Matthews is," they are carried off and shoved into a 1989 Honda CRX. These students then take off, hunting down drunk drivers and attempting to ram their car into them before the enemy drunk driver can hit an innocent civilian minivan. Tests have not been encouraging so far, as the students appear to mistake large trees and trash dumpsters as "drunk drivers." I think the main obstacle is keeping the DUIs from "rocking out" to The Grateful Dead every time they get in the car.

This goes to showcase some of the "American know-how" that is directly responsible for this country's rise to fame, in addition to our profitable mass export of "Too Hot to Handle!" videotapes. While George Bush Jr. has been incessantly babbling about how wonderfully spectacular the National Missile Defense System is and how it's our last hope for peace and how he'd have no problem with his daughters dating it, foreign leaders have expressed a considerable amount of opposition. It should come as no surprise that the leading anti-anti-missile system advocates are none other than Russia and China, a few of the only major red menaces left. Actually, they're considerably less red than they were about 20 years ago, so they're more like pink menaces. Russia and China basically denounce ANYTHING the US wants to do, regardless of worldwide impact or function. They're like the two cranky aunts your parent made you stay with when they both simultaneously went out of town to cheat on each other. Er, the parents being the ones who went out of town, not the aunts. If your aunts were cheating on each other, I think you've got bigger problems than worrying about what Russia thinks of you.

Regardless, Russia can't stand ANYBODY but China and maybe a few of those crazy extremist rebel groups that routinely blow up large chunks of unknown European countries that end with the letters "-avia." They're generally pissy at the world because while the rest of Earth is producing and trading things like computer microchips, jet planes, and Lean Mean Grilling Machines, Russia is unable to make anything but liquor and grey scarves. Plus their citizens are always standing around and mumbling, with absolutely nothing to do but be depressed and knit more grey scarves. Russia wants to eventually become a world power again, but right now they're $380,392,299,102 in debt from gambling losses and investing in Crystal Pepsi manufacturing plants. China, on the other hand, has a shitload of citizens who absolutely adore their government because "failure to adore the Chinese government" is against the law and results in a public execution, where a representative of the state sits the dissident in an electric chair located inside a gas chamber, then proceeds to shoot them in the head with bullets covered in lethal poison. Their country averages about 192 citizens per square foot... citizens that wouldn't think twice if asked by their government to strap explosives on themselves and run naked into a Des Moines mall. In addition, Russia claims that setting up a Missile Defense System would break the 1972 ABM treaty, which was signed by president whats-his-name sometime back around the late 60's or early 70's. Bush claims that, just like disco, the 1972 ABM treaty is old and outdated and isn't fit to wipe his Texas ass with. The "Disco Defense" is Bush's claim to fame and presidential punchline.

George Bush Jr. has been ignoring the demands of the ever-so-whiny China and Russia Brothers, opting to instead continue his strategic Missile Defense System. The most recent test on July 14th proved that if Russia or China decide to start shooting fake missiles or dummy warheads at us, we'll have a 50% chance of destroying them. Apparently George Bush Jr. is very afraid of being attacked by missiles that don't explode, so he's set up a system to insure they don't even get NEAR our major cities. While I agree that having one large object collide with another is just a remarkably wonderful thing, I'm a bit leery of the 50 / 50 odds. I mean, 50% is still an "F" in any college course. I should know; all my tests COMBINED in my Electrical Engineering 281 course didn't even approach 50% total. I don't think that people should get their hopes up for a missile defense system that misses just as many fake missiles as it hits. This is where my idea comes into play:

I'm suggesting we set up a Missile Defense Defense System for America, one that will protect us from that deadly 50% of stray American missiles that mistakenly fly past their target and run the risk of blowing up an innocent town or abandoned salt mine on the other side. Are you confused as to what I'm trying to explain? I don't blame you! That's why I hired a team of professional technical writers to create the following diagram:

Here's how my plan would work:

1) Missile from China or Russia or Cuba or Atlantis or wherever is launched, headed for Pittsburgh. Why are enemy states launching explosives at Pittsburgh? Well do you blame them? Have you ever been to Pittsburgh? I can't imagine why anybody wouldn't want to shoot at Pittsburgh with a series of objects that cause other objects to blow up.
2) Missile Defense System launches a counterattack missile, aimed at destroying the original missile. Since the enemy missile either isn't fake or isn't traveling at four miles an hour with its right turn signal on in the left passing lane, the Defense System missile completely misses its target.
3) Defense System missile arcs and begins to plummet back to the Earth where it will drop onto your house and cause you to be blown up. If you recently installed aluminum siding on your house, you'll especially feel like a real clown because that will get blown up too (probably).
4) My Missile Defense Defense System rocket takes off, flying up to intercept the Missile Defense missile before it can fall on you or your loved ones who probably haven't built up a sufficient resistance to missile attacks.
5) They collide, providing a spectacular light show and catching most of your neighborhood trees on fire.
6) (NOT SHOWN) I fire the design team responsible for producing this graphic because it's really quite shitty now that I look at it.

Just think about the laws of averages, folks! If 50% of the Defense System missiles fail to hit their target, and 50% of my National Missile Defense Defense System warheads hit their targets, then you only have to worry about getting blown up by 25% of the Defense System's missiles! It's the law of averages working FOR us, instead of working AGAINST us and causing our major bodily organs to be scattered across seven different states! I don't think China or Russia would be able to bitch at us about this system since we're basically taking a very large and expensive insurance policy out on our own crummy missiles. And it's not like we should have to worry about what Russia thinks since their entire country could easily be taken over by the cast from "The A-Team" alone. And hey, if this plan doesn't work, we can always shoot drunk college students into the air to intercept the missiles. I'll call my representative from MADD and see what she thinks, assuming she's come back from the liquor store.

Everybody's favorite bitter old fucker is back and ready to go with four new pages of mental derelicts and scumbag meatheads on parade for you, the viewer! With pictures like these, how can you say no? 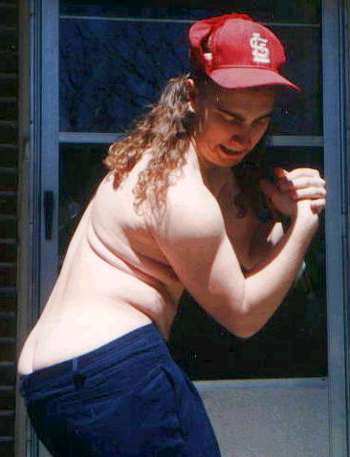 Oooh! Hot AND sexy! Hurry on over and take a look at the latest group of disgusting cretins to decorate Cliff's website!