I was so pumped up that I said a rude word to my mom while she was driving me to the protest. She turned the car around and grounded me, can you believe that? What a b!tch. Next time me and the Ron Paul society gatecrash the debate club, I'm changing my speech. George Bush isn't the biggest obstacle to the democratic process in America, it's that bitch Janelle Harper aka my freakin' mom...

We all assembled for the protest in Ryan's front yard. Great turn out guys. 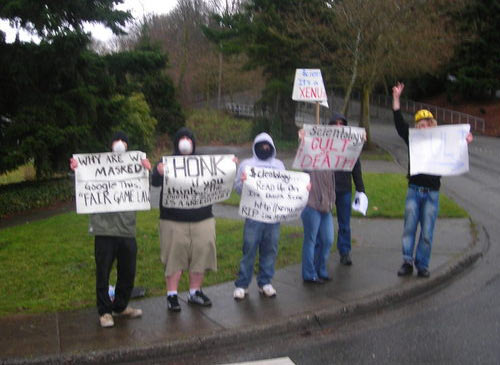 A few of the local kids rode past on their tricycles. Some of them looked suspicious, so we all took the long way home afterwards, even Ryan went in through the back door instead. Anyway, I was holding a sign that said "ScientoloGAY". I don't think any of the neighbourhood kids will be converting any time soon. Ryan's mom made us some lemonade, and then we went to tell Andy the priest about what a good thing we've done.

He said God was very pleased with us, and that he wanted to see Ryan alone. We waited outside for him, afterwards he smelled very funny, like baby oil, and was very quiet. I think the priest is a Scientology man!!! What's a boy to do...

Okay I've been holed up in a barnes and noble starbucks for 14 hours, the last true refuge around these parts that isn't surrounded by scientologists. I like this place best because most people here are somewhat intelligent or at least don't immediately disregard me as a "loser" simply because my choice of reading includes atheistic topics. I usually tell them that, to be fair, I did try to read the bible, but threw up a little in my mouth in the middle of Genesis (the only bible book I remember thanks to sega) by the a) sheer stupidity of it all, but more importantly by b) how many idiots actually devote themselves to this garbage. Also, the starbucks barista has a real thing for me, I mean when I tipped her my change she really lit up, I think when I order next I might invite her to one of these protests in the future


Anyway, if any anons see this, could you send help or let me know when the coast is clear? I lost my mask and to be honest im scared to shit. I can only be thankful that I didnt bring my car or theyd have my license plate and any semblance of a life I once had will be gone. I can see it now, no more xbox live account... I see someone pulling out a cell phone, i think its one of them, Check my blog in 3 hours if its not updated then im

It is my sincerest hope this letter reaches you and lil Merrill and old Greybritches (how is he doing, he is the finest coonhound I ever known or will know now). I don't know how I will get it to you maybe such as tied to a pigeon or hidden on my body somewheres but I reckon there is a chance you'll get it somehow, if there is justice on this earth which now after these events transpiring I feel there surely ain't.

It is cold here and lonely. Lonelier than the crick in winter when the ice was like to a gypsy mirror in the moonlight. The first day weren't so bad, we set up headquarters outside of the downtown Kinkos (you know the one, it is adjacent to a Subway and acrost from that place where Merrill gets his therapy done) our goal being to eventually push on to the Hubbard-Chrysler Tower and take it. General Firewall-Chan expected little resistance and we all generally shared his optimism, damn his eyes. Spirits was high and we ate much pocky and drank many Red Bulls and other such energy drinks late into the night around the glow of our laptops, singing rounds of Let's Go Tsukinuke and even an old spiritual called I think Soulja Boy which a few of the Negroes taught us (it is strange fighting alongside them but they seem to be decent folk when they's not chimpin out). You know I could not afford a real mask since you needed that back surgery so I made due by printing one out as best I could. Some fellers was insulting me for that but I think it was all in good fun and we went to bed happy and ready for the $cifag attack we were sure would come.

Well it did come and before dawn. I woke up to musket fire and cannon bombardment, these being their means of attack in the first hours, and I am not ashamed to say I made in my pants directly. The smoke was so much that we never saw the sun rise, if it rose at all on that black morning. Most of my company was killt then. lulz42 died in my arms with a bullet through his spine and I saw Scissors-chan walking around holding her own arm which had been blown off like it weren't no thing trying to stick it back on and mumbling that anonymous does not forgive. if anonymous does not forgive I pray anonymous also does not forget the lives given here and the /b/lood shed on these sidewalks that are now forever stained red. momma, it is a terrible business, this project chanology, and I curse the day I ever heard its name.

There is not much to tell after that. We fought all that first day and General Firewall-Chan said we would pull through but nobody that still had a head on their shoulders believed him. He died in the night or so I heard when they switched from muskets to needleguns, clear cannons, and mind bores. Regardless of when he got it or how, I saw with my own eyes his body devoured by wailing lobodreamers, they gnashing with their metal jaws and the dead eyes, momma, like emptiness or a sky bout to storm. And after the lobodreamers came the dogs with the human hands and the babyfaces and along with them some things I can't rightly describe nor wish to only I see them everytime I lay me down. And now here I am, alone escaped, and hiding in the ball pit of a closed down McDonalds. I'm scared but I won't go screaming no I won't give them that much. I can hear something at the door wet against the glass and I see shapes moving but I ain't gonna go screaming.

Momma, I'm sorry bout all this. Give Merrill my Gundam models, the ones he always was looking at. Since poppa died in that accident down on the cubicle farm I reckon Merrill will be the man of the house now. If you love me, you'll tell him his brother died a hero and not a coward. And you take care of yourself momma and Old Greybritches too. Make sure he is fed sufficient and that he is let out when he needs.

A special thanks to all contributors to the NetBeat blog and comments system!