I hide in alleys or behind parked cars, behind dumpsters or trash cans, behind coffee shops or nightclubs, dimly lit parking lots, parking lots with way too much light, the periphery, Burger King bathrooms - waiting for victims.

When I see one, I leap out of the shadows, overpower him, and make him fill out my compatibility test. Six questions, all multiple choice (though I also recommend a brief bio and favorite movies). If he passes, I give him my phone number and tell him to call me because I'd really be interested in a relationship. This is just a ruse. As the relief cancels his adrenaline, I lunge.

I need about 3 pints of blood every night to survive. Sometimes this forces me to be less than picky about the source. I once bit Vanilla Ice. Another night, the singer of INXS. One time I siphoned blood from a drainpipe filled with dead rats. Another night: Gwen Stefani. After I'm done drinking my victim's blood, I dispose of the corpse and take the bus home. I don't have a car, so I rely on public transportation. I work second shift at Borders. 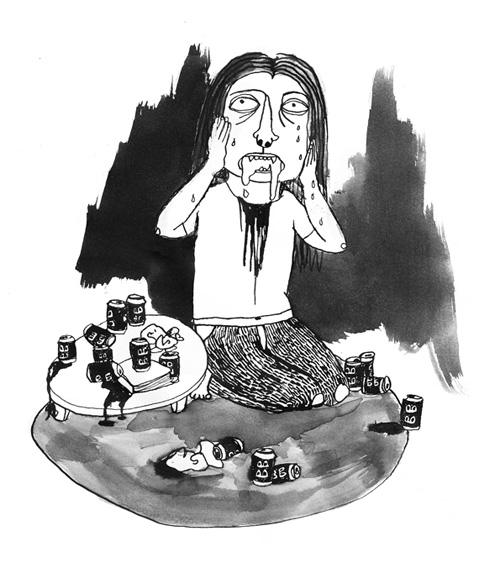 When I can't get blood, I drink Berry Bop, a Japanese cola comprised of 90% amphetamines and 10% berry flavor derived from amphetamines. If I drink too many cans, my pulse races and my mouth gets filled with a chalky substance that I believe to be bits of ground-up teeth. Berry Bop withdrawal makes one sweat profusely, which can be bad for pores. These are the things a gay vampire must consider.

Some nights, I fight werewolves. I also frequent haunted houses. I'm learning how to teleport.

I'd call it an alternative lifestyle, except that makes it sound like I had a choice.

In my first year of college, I was known as a poet. Mostly by myself, but also by one or two girls I showed my poems to. My poetry was a response to the anomie of post-adolescent but pre-anything-by-The-Flaming-Lips angst. At a certain point in life, death inevitably creeps into the margins of one's notebooks. I stayed up late at night, pouring myself into my work, writing a postscript to a life all but written.

One night, following a poetry slam that had to be adjourned early due to my intense recital, I was walking down the street a block from my house. As I approached the streetlight on the corner of Preston and Commercial, a man in a dashing Armani cape jumped out of the shadows and asked me, politely, if he could drink my blood. Something about his request made me suspicious, so I asked him if he was a gay vampire. 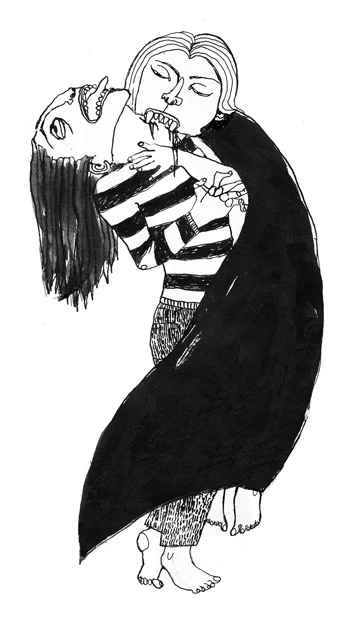 "No," he said. "Although I see how you could make that assumption, since I am well-groomed, and this stylish wardrobe does betray my excellent fashion sense, which I'm not ashamed to say is a huge part of how I define myself as a vampiric-but-definitely-heterosexual male seeking empowerment in a society that extols beauty, but equates it with a feminine vulnerability that to most men is an unobtainable ideal."

After my assailant was done sucking my blood, he dragged me into an alley and left me there, still paralyzed. As I lay on the pavement for the next few hours, I found myself intensely contemplating the nearby streetlight, partially to maintain my sanity, partially because I'd become self-conscious about my complexion and knew that sodium-vapor bulbs were unflattering. Finally I lost consciousness. When I woke up in a hospital the next day, I found out via a chart above my bed that I was a gay vampire. I also received word that I'd been expelled from college for exposing myself during a poetry slam. For reasons I can't fully articulate, I also blame gay vampires for this.