Olympic Blast from the Past, Present, and Future!

Touched by the Olympic Spirit

In ancient times, Tarzan would attempt to steal the Olympic torch thinking it was going to be used to set the jungle on fire. This tradition still lives on today.After starting out with a bang, the 2002 Olympic Games are over. With their departure, we can look forward to the return of a wealth of rewarding NBC sitcoms about sassy homosexuals saying sassy things to their uptight heterosexual friends. But the Olympics leave with us memories of old heroes returning and new heroes arriving, of amazing athleticism, and so very much boredom. We can all fondly look back all those sports that confuse the hell out of us and serve as a bold reminder as to why we only do this damn thing every two years.

But whether you like the Olympics like a giddy schoolgirl or loathe it like a stepchild, you can't help but appreciate the long, amazing history and legacy of the games. They bring the world together, those Olympic games do! Let us now celebrate the Olympics, in its past, present, and future glory!

The Olympics of Past

Soon Greece entire was partaking in the Olympics. Athletic men, women, and manchildren were dazzling crowds of millions with tremendous displays of sportsmanship. Back then, because of tight anti-drug regulations, everyone had to compete naked. Events like wrestling, squatting, running, and intercourse made the Olympics a smashing success.

Eventually everyone just kind of forgot about the Olympics for a long, long time. This coincidentally coincides with the point I decided to cut corners in my research. Then in 1896 everyone said, "Holy shit, remember the Olympics?" The games began again with renewed gusto and have continued to this day.

Along the way, the Olympics have provided the shell for countless yoke-like memories of great events, such as:

Berlin, 1936 - Adolf Hitler enters the games and races against African-American Jessie Owens. He loses, and blames his loss on Jessie Owens pulling a gun and attempting to rob him. Hitler is devastated, and begins a maddening descent into building a robotic exoskeleton for himself.

Munich, 1972 - Adolf Hitler attempts his revenge by once against entering the games. His robotic exoskeleton fails, and he explodes in a blaze of Olympic glory creating the most wondrous lightshow ever in the history of the games.

Moscow, 1980 - A global boycott of the 1980 Olympics ends with one lone Soviet athlete winning every single gold medal in every event. No bronze or silver medals were awarded due to lack of competitors.

Atlanta, 1996 - The games were nearly ruined after a dastardly plot to blow up Atlanta. Authorities captured five of the members of the Sinister Six, thwarting their evil plans before they could come to fruition. Doctor Octopus remained at large, and was able to detonate a single explosive. Thankfully he did little to hinder the spirit of the games. 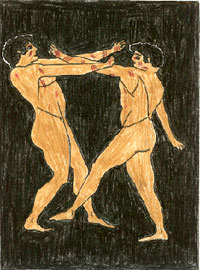 Ancient boxing used to be really awkward. Not only for the fighters, but for everyone watching.

Of course our present day Olympics have changed a lot since the olden days of ancient Greece and mid-nineties Atlanta. In the past, the Olympics were a barrage of hardcore javelin throwing, manic downhill skiing, spirited discus tossin', bone-chilling speed skating, gymnastic back flippin', and good old Hitler thwartin' fury. Now it's all confusing sports designed by twenty third century aliens more concerned with the gravitational rhythms emitted by the athletes than entertainment.

On top of that, desperation is leading the Olympic Committee into the world of experimentation. Recently, Curling became an Olympic event after housewives too frail to play hockey wanted to make a sport out of their daily cleaning chores of sweeping the floor. This type of experimentation can only lead to a dark future of dark Olympic sports. A future documented in the following dark and moody bulleted (but not the kind of bullets that kill Americans!) list: 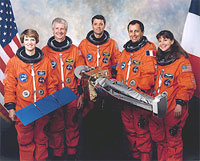 Astronauts are still forbidden to compete in Olympic Sports.

2008 - Freestyle rap becomes an official Olympic Event. Controversy erupts when a Russian rapper is awarded the gold when an American clearly had the superior rhymes. A French judge completely ignored the American's brutal "Romeo" with "Show me a ho" rhyme combo.

2012 - Scandal rocks the Special Olympics when it is revealed there never ever was a Mount Special Olympus. The contestants are then rounded up like cattle and never seen or heard from again.

2027 - The Olympic Committee begins experimenting with other seasonal Olympics. The Fall Olympics fail to catch on, with it's crappy events of leaf raking and gutter cleaning.

2032 - The Olympics go virtual when no surviving human is capable of physical exertion. Duke Nukem Forever Dukematching becomes the most popular event.

2046 - The nefarious Andromada Syndicate enslaves the planet Earth. The vile alien controllers adopt the Olympics, only they replace all the games with ones where they shoot humans in the crotch. Ratings soar to record highs as humans become engrossed with watching other humans die violently due to groin-related injuries.

Yep, it sure does look like we are in for some magical years as the glorious Olympic tradition lives on! I'll bet Old Man Zeus had no idea his tomfoolery would one day pre-empt NBC's Just Shoot Me! But sure enough, it has. And it will for many more years to come! Of course if precedent has anything to say, and it usually does, I sure as hell won't be watching!

Something Awful's resident technology consultant is at it again, this time offering up a comprehensive guide to using the Internet. This fun an informative guide aimed at novices all the way up to experts, as Jeff K. first delves into the basics and works you towards advanced security issues. If you have ever had a burning question about using the Internet, it's sure to be answered here!

Now soem of yuo kids out there may not know what teh Intarnet si becuase your all trollops bent on a fascinating angle. Teh Intarnet was created in 1987 by a cartographer named Ben who was workeing on a steam powared coffie machene. He also invented Lunix and BeatOS witch I call "BEAT OFF" because anybody who uses BeesOff is about liek a retarded fisharman useing Betamax tapes to catch teh fish!!!

Click here and prepare to be enlightened. The hard way.