Outer Space is out of this world!

Here's looking at you, Outer Space! 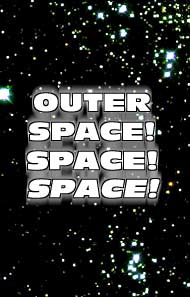 Text added to emphasize how out-of-this-world outer space is. Slight motion blur added to emphasize the text that emphasizes the background.If you're anything like me, besides being socially unfit to drive a car, you're also fascinated by the out-of-this-world-concept of outer space. For the uninitiated, outer space is basically everything that exists outside of the planet Earth's atmosphere. You'd be surprised, because outer space is both big like an ox, and vast in amount like women and their excuses not to go out with me. In short, outer space is the burning question that haunts man when he urinates. A question I will do no less than attempt to answer!

The easiest way to understand outer space is by examining the stars. Watching Entertainment Tonight will take you pretty far, but at some point you're just going to have to go outside with a telescope or binoculars and look straight up. What do you see? THAT'S OUTER SPACE, BABY! The vast empty of darkness that consumes the souls of man, soft spaceships that have been ground into more edible chunks, and all the light of the galaxy. Look at her with fear, for she can turn you inside out and then drift your ass into the sun upon a mere whim!

The first thing you'll notice is that in-between the chunks of brooding space darkness are a lot of tiny dots of light. These dots are stars, much like the sun that haunts us with its evil during the day and taunts us with its absence at night. Although they may appear to be very tiny lights, they are actually quite large and far away. In olden times, ancient amateur circuit astronomers used to draw imaginary lines between these stars, creating primitive drawings of naked women to fuel their masturbatory fantasies. Later on, we learned that they weren't drawing naked women, but in fact weird things like a great hunter, a crab, and various sized measuring cups. They did this because space just happens to be home to a gigantic space crab capable of pinching this planet in half with its celestial claws of astronomical proportions. Thankfully it is kept at bay by a sexually frustrated hunter who uses arrows of burning gas to thwart the dastardly crab. But don't take my word for it! Just let outer space tell you that tale itself! 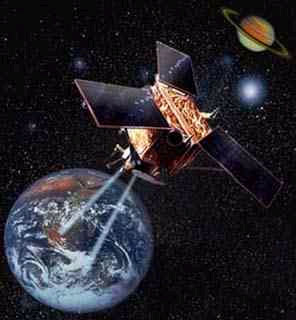 Thanks to outer space this satellite is taking pictures of you in the shower.Around each of those tiny dots you will find a collection of planets, every single one of which at one time contained intelligent life. Unfortunately outer space is a harsh mistress, and most of these otherworldly beings were killed instantly due to a lack of breathable atmosphere or proximity to or away from their star. Still, in the overwhelming immensity of space, there is undoubtedly lots of intelligent life remaining. Of course what life remains is most certainly bitter, hateful, and lusting for the blood of man and our lush, fertile planet full of buxom women and Danish butter cookies. I'm sure we'll have some choice encounters with those wacky space folks later on!

Yes, space is in our future! Many believe that man's home will one day be in the stars. I hope and pray that that isn't true, because we will surely die of the extreme heat. But if it's a far enough away from the stars where we won't be melted, I'm all for it! To quote Stephen Hawking's cold, calculated robot master, "To confine ourselves to terrestrial matters would be to limit the human spirit." And you can't argue with him, because he knows his shit. I mean cripes, the guy is wearing diapers. He knows the secret of life.

So by now you've surely got some crazy notion to strap a rocket to your back and blast yourself into heaven. And no, that wasn't some kind of gay sex joke. Okay, so it was. But what's important is that you understand that outer space is dangerous, and without taking proper safety precautions and wearing protection, you'll end up getting yourself into a galaxy of hurtin'! And no, that wasn't a continuation of that gay sex joke from the first sentence. Be safe, and know the facts about space:

Outer space can be very cold or hot, so be prepared and take both warm blankets and casual summer wear.

A space suit is the best means of not being eaten alive by outer space. Make sure you and your companions are wearing one whenever gallivanting through the cosmos.

When caught in the tractor beam of an alien vessel, drift sideways against the beam and be careful not to let the undercurrent pull you into the ship.

Space has no gravity, so plan your activities accordingly. A fun Sunday afternoon picnic in outer space could easily be ruined by food flying every which way. Not only that, but without gravity things easily become deadly projectiles. A chicken leg could become embedded in someone's face, and that's jut not fun for anyone. Not even for non-Americans.

Flying around the Earth too fast causes time to reverse. If you're in space and have the opportunity to reverse time, please be responsible.

Staring directly at the sun from outer space is not only painful to the eyes, but also likely to melt your face off. Always look at the sun with your eyes closed.

Be sure to observe the sights of Earth when in space. The Great Wall of China and Ted Kennedy's head are both among the monuments easily seen from above the atmosphere.

Fire in space looks really freaking awesome. If inside a space capsule, light a fire and watch it go! It's really, really totally awesome!

If you happen to catch the haunting visage of space nerd Wil Wheaton's career drifting aimlessly, do not touch it or make eye contact. It will suck the life out of you like it does to so many other things.

Finally, the most important part of any space adventure – accidental or otherwise – is the return. A well-planned outer space excursion has a well-planned return, but a bad one has you being burnt to a crisp when you reenter the atmosphere. To be safe, make sure whatever clothing, space suit, or space capsule you're inside of has racing stripes painted on the side. This will reduce friction and prevent you from returning to the surface as a raisin-sized chunk of dead guy.