And After Postmodernism is...

Postmodernism is Dead in the Midwest 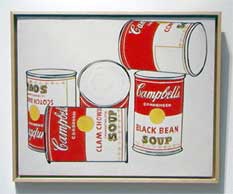 Andy Warhol will soon be replaced with James Smith who will paint pictures of Sam's Choice Instant Soup Mix.For the past month or so I have been reading a lot about the concept and philosophy of postmodernism. I had heard bits and pieces about it before but I really lacked a comprehensive understanding of what it was, naturally I still lack it, but I'm going to try to write about it anyway. In a nutshell postmodernism in art, literature and architecture is a combination or exaggeration of modernist themes. It's most easily understood in architecture where a postmodernist building will combine several different styles into a single building. In other words, throw the Parthenon at a medieval castle and then launch a couple ziggurats at it and you've got a postmodernist building.

Still reading? Good, don't worry it gets funny at some point. I think.

Naturally postmodernists believe we live in a postmodern society, where borders are blurred and nations are identified only by the trends they contribute to global society. While there are some exceptions to this, I have to agree that what I think of when I think of countries like China and Japan are Chinese food, sushi, tentacle rape and martial arts movies. America is the ultimate example of this. It absorbs these cultures, swallows them into its bloated girth, and regurgitates them onto the rest of the world; a soulless parrot god puking trends down the throat of Western Europe, shilling Big Macs in sub-Saharan Africa.

Since I became aware of postmodernism I have of course been shining my spotlights around looking for the next cultural iteration. This may be a shot in the dark, but to me I see the emerging trend and I see it in one capitalist icon; Wal-Mart.

I went into Wal-Mart tonight to get some last minute shopping done before I zip off to the bright lights and big city of Chicago. I noticed in the medicine section that next to each brand of over the counter drug available there were three different "generic" brands that were each recognizable brand names themselves. This wasn't a sudden occurrence, the gradual rise of off-brand branding, as retarded as that sounds, has been taking place for several years now. I selected one of the three competing off-brands and moved on, there was no qualitative difference in the choice I made, they were all equally priced, it was just a matter of which one's packaging and reputation tickled something dark and primal in my hunter-gatherer cortex.

I spent a good hour browsing around the lonely halls of Wal-Mart, nearly never seeing another shopper and only spotting employees when near the front of the store. The misshapen old night hags at the registers clustered like gargoyles on some gothic cathedral, the plaster too thick on their limbs to allow them to leave their stations. The few shoppers I encountered shuffled slowly and quietly, not excited or energetic, but beaten. Cowed even. 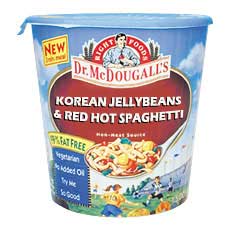 Go ahead and buy it, it all tastes like a mixture of chicken and soy sauce anyway.One of the key ideas of postmodernism as it relates to consumerism is that by limiting you to two choices you will be satisfied, not realizing that you were restricted from actual freedom. Wal-Mart breeds a more insidious faux freedom. You actually are making no choices when you shop there, every product in a given category is essentially identical, but there seem to be an almost overwhelming number of options.

Go to the oriental food aisle some time for a particularly dubious experience. There are a number of "oriental" food producers who are selling products made in America. Okay, that's not too shameful, but what is shameful is that many of these producers have advanced beyond emulating a culture's culinary product. They have begun to produce new dishes that have little or no roots in the culture and still market them as "Chinese" or "Japanese". It's only a matter of time before you see "General Chang's Chinese Stir Fry with Real Beijing Low-Fat Shredded Cheddar". A week later it will be "Equate" and "Sam's Choice" on that same package for a dime less; taste the savings!

We're not repackaging other cultures any more, we're fictionalizing them. Shrewd marketing hydras have caught on that we only know a culture through what they sell us as an intermediary. Now that they're aware of that you can expect such amazing products as:

Oh, but we aren't the only culture guilty of this, it goes both ways - sort of. Take Kentucky Fried Chicken, which has over a thousand franchises in Japan. Japanese franchise owners, realizing that the Japanese public know very little about the American relationship with fried chicken, have been marketing fried chicken as the All American Thanksgiving Meal.

So what is this brutal new philosophy of scientific capitalism and reverse demographics marketing? I like to call it homogenization theory, even though there probably already is something called homogenization theory. The ultimate end of this careful marketing is to produce a series of products that are all identical yet are each marketed in such a way that they seem entirely different. You squeeze it on your hair in the shower, you squirt it in your contact case at night, you drink it with your meals of fried it, and it all tastes different because they tell you it does.

It started in the midwest because the midwest is an uncultured wasteland with no direct contact with the outside world. It's a perfectly tilled heath, fertilized already on decades of mass-marketing beamed in from the coasts to the TV sets of every sadsack family from Ohio to Wisconsin. Even the supposedly non-commercial programming already epitomizes this, with shows so similar that the only differences are the catch phrase and title. What these marketing geniuses don't realize is that they reap what they sow and one day Los Angeles and New York will be overrun with fifty-acre shopping complexes that sell absolutely nothing.