Why Is Our Newspaper Entirely Devoted To Our Paperboy?

When I took a staff job at The Daily Sun, I did it with the understanding that there’d be a few changes around here. Deeper local coverage, a fully staffed late-night desk, and a larger role for investigative. I’ve gotta say: you've delivered, and I thank you for keeping your word.

Honestly, my only real complaint now is that our newspaper still seems to be entirely devoted to the kid who delivers our newspapers: 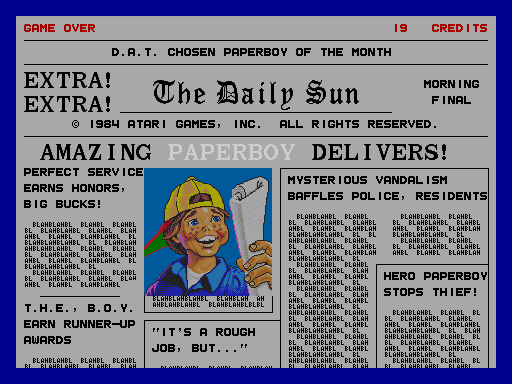 We gotta ask ourselves: should the fact that he did his job correctly be front page news? Does a kid tossing a few newspapers in some mailboxes trump the contentious Governor’s race, or the rollback on food stamps for the poor? I’m not gonna pretend to know the answers, but...we really gotta think about it.

And before you pull out the talking points: yes, I understand our Paperboy has a challenging route. I know he’s constantly getting assaulted by breakdancers and haunted handpush lawnmowers. And that’s just Easy St. alone.

But all our jobs are hard. Sure, if I’m late on a deadline, the physical manifestation of Death himself won't chase me with a scythe. But if he did, I wouldn’t want a medal for it.

Everyone’s gotta do their part. We get paid to inform the public. He gets paid to deliver newspapers, and destroy the houses of non-subscribers with said newspapers. We shouldn’t let his job get in the way of ours.

And if you’re thinking I’m jealous, you’re wrong. I don’t want to be on the front page. Especially because The Daily Sun’s coverage can run really hot and cold: 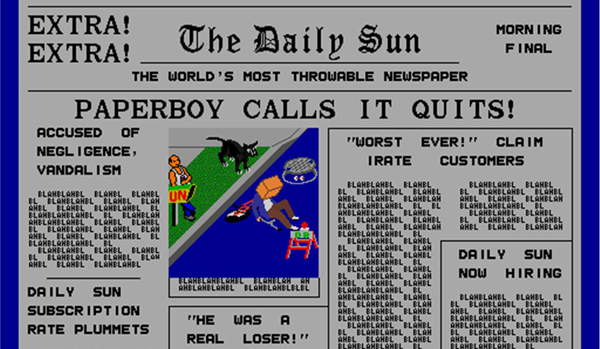 You make me feel bad for this kid sometimes. The photo you ran is him being attacked by a dog, a drunk guy, and that mystery perv that lives in the sewers. Kinda wish you’d tell the photographer to put down the camera and help a fellow Sun staffer.

I’m also a little shocked you ran out and interviewed people. I don’t know who called him the “Worst Ever!” but there’s no way he’s worse than that kid who just froze in place until someone restarted our entire universe. Seems like a cheap shot.

Can’t believe you ran with “He Was A Real Loser!” C’mon, Chief. The kid’s like 9 years old.

I won’t belabor it, but these are my thoughts, take ‘em or leave ‘em. Oh, one last thing: at some point, we’re gonna have to write actual stories instead of simply repeating the word “BLAH” over and over again.

But hey, one thing at a time, right?