Presidential Debates and Haunted Cliffy B.

I've also conducted a vigorous scientific survey of the people who live in the apartments around me, and none of them fall into the "working middle class" category. Most of them can be described as "teenagers who are majoring in 'alcoholism' and getting a minor in 'being very, very, very loud' at the local state college." This leaves me with only one large group of people that could possibly be described as "working middle class" - guys that work at industrial plants and wear yellow foam hats.

Back in my high school days, I used to work for a company that made and repaired pneumatic conveying equipment. They produced elbows, blowers, airlocks, and many other heavy gray objects which would break your foot if you dropped them on it. My job was limited to driving a delivery truck and: 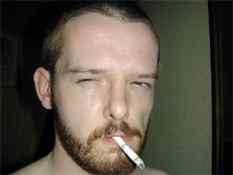 Whenever I'd show up at an industrial plant (like General Mills, ConAgra, or Quaker Oats) for the first time, some guy wearing protective goggles and overalls would come out and stare at my delivery truck, then me, then the delivery truck, then some random oxygen molecule floating around, then back at the truck again. After he finished digesting the entire scene before him of "man with truck", he would approach me and a conversation like the following would ensue:

Then, depending on how much the worker despised a Chevy truck, he would begin to ram his forklift into the back of the delivery truck, denting up the sides and scratching the paint. If he only moderately loathed Chevys, he would give a mock apology before ramming it again. If the worker absolutely abhorred Chevys, he would pull the shotgun out from the gun rack on his forklift and pepper my vehicle with buckshot. Hey, my job was just delivering the part and leaving. There's no way I'm going to take a bullet from somebody who owns paintings of Jesus wearing NASCAR memorabilia.

In rare instances, the dock worker position would be split into multiple people. One time I had to bring some blowers to a place near Atchison, Kansas, and three guys came out to move it. The first one, a 200-year old toothless mummy on a forklift, couldn't hear or see anything, making him the logical choice for operating heavy machinery. The second guy sat in a chair and shouted helpful instructions to the mummy, such as "TURN TO THE RIGHT, YOU STUPID FUCKING MORON!" and "GO LEFT, YOU DAMN JACKASS!" Usually these instructions would follow the mummy ramming the forklift into a wall or barrel, but I assume they had some master plan during all of this. Now, at this point, you may be wondering where the third man was. Well, I am proud to reveal that he would always come out with the two other goons, then promptly walk into the shipping / receiving office and start hitting on the woman at the desk. That's true teamwork, folks. This is the well-oiled machine that fuels the dreams of America. This is... well... three guys who usually ended up terribly damaging my delivery vehicle.

So, without any other groups that could possibly be labeled as the "working middle class", I'm forced to assume these people are the key demographic our aspiring presidential hopefuls are aiming for - yes, the people who used to ram my truck with a forklift. As a result, I'm going to cast my vote for whichever candidate promises to inflict the most heinous, horrible, painful things on the "working middle class." Al Gore, if you're reading this (and I know you are), you'll easily earn my vote if you campaign to lace orange hunting vests with deadly radioactive isotopes. George Bush Jr., if you're having somebody else read this to you (and I know you are), you'll grab my vote once you promise to pass legislation banning the confederate flag on giant foam hats.

Actually, on second thought, screw them both. I'm voting Yablonski in 2000.

Woooooooo, spooooky Thursday! Jeff K. has another chilling Halloween tale for you, served up gruesome and gory, just the way you like it! Prepare yourselves for:

Chills, thrills, and... uh... spills! Check out the horrifying tale of "THE HAUNTED CLIFFY B.! TAIL OF TERROAR!"

Hot and spicy ROM Pit action! Nefarious presents a review of "Totally Rad", a game which was made for the Nintendo... but probably shouldn't have.

You assume the roll of a dimwit named Jake that only speaks in horrible catch phrases. Somehow you encounter a magician named Zebediah, and he teaches you magic by making you run around an awful lot. It’s actually just the plot of "The Empire Strikes Back", but Luke has the intelligence of fishing tackle and Yoda is some horrible troll type thing. The actual game starts when you’re “attacked unexpectedly” (attacked by what, I have no idea). You then have to fight all the enemies off by yourself. Evidently the Great Zebediah is a lazy bastard and refuses to help in any way. Plus, he wears a hat with a “P” on it. Last time I checked Zebediah starts with a “Z.” I hate this game.

The Download section has been updated with a whole crapload of new clips from the recently reviewed cinematic stinkbomb "Jack-o." There's some utterly hilarious clips in there, including "Dracula's Happy!" and "Dracula's Happy! Again!", both of which will make you wonder what exactly is inspiring the look of sheer joy on the guy's face. Download them and weep, pansy child. Oh yes, and if you've never read the review of "Jack-o", it's right here.