Recently, the eyes of people across the world have been focused on the controversy regarding the recall of millions of Firestone tires. However, moist and creamy SA reader Scott Ritchie has informed me of a more sinister recall that could possibly end up causing World War III. Yes, I am of course referring to the recall of millions of Galoob's "Sky Dancers" toys because of "eye injuries including scratched corneas and incidents of temporary blindness, broken teeth, a mild concussion, a broken rib, and facial lacerations that required stitches."

If you haven't heard of these wonderful toys before, let me catch you up to speed. A pointy, T-shaped model of a fairy is mounted on some kind of large plastic launch pad, which, when triggered, shoots the fairy straight up into the air like an arrow coated with poison. Sounds like an incredibly excellent idea, doesn't it? I can just imagine the board meeting when they brainstormed this ingenious idea.

DESIGNER: "Yeah, so then the kid yanks this cord and the six-inch doll shoots out and flies around the kid's room like a crazed T-square."
PRESIDENT OF GALOOB: "Sounds interesting."
DESIGNER: "It really is! Kids like fairies, they like crap that flies, and they LOVE spinning plastic chunks of death, so we combined them all into one product!"
PRESIDENT OF GALOOB: "Isn't there some danger inherent to this toy? Are you sure this is safe to sell?"
DESIGNER: "Let me remind you that I have photos of you and the mule from last year's Mardi Gras."
PRESIDENT OF GALOOB: "Let's name them 'Sky Dancers' and ship ASAP."

Of course, if this scenario didn't occur exactly how I described it, I can imagine no good reason why Galoob, who has defined the word "quality" by releasing such marvelous toys as the Spice Girls doll set, would manufacture such an outrageously evil product. After performing some intense research (I looked up the words "galoob" and "naked Spice Girls" on google.com), I have come up with one clear answer: Galoob wants to trigger World War III. 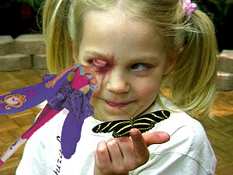 Think about it for a second; right there, on the recall page, it lists the words which will notify parents that they just bought a toy which could possibly fly up into the air, burrow into their child's brain like a rabid weasel, and then proceed to lay eggs in their skull. No wait, scratch the "eggs in their skull" part. Anyway, check out these key selections from their press recall:

Galoob® has received 170 reports of the dolls striking children and adults resulting in 150 reports of injuries. They include eye injuries including scratched corneas and incidents of temporary blindness, broken teeth, a mild concussion, a broken rib, and facial lacerations that required stitches.

So what's the last image the kid sees before their plastic doll leaps into the air and pierces their corneas? "MADE IN CHINA." This is a series of words which will haunt them every day of their Godforsaken lives. This is a phrase which will be burned into their mind when they wander the city streets at night, blind, drunk, and filled with rage. Soon these children will grow up, spend years of their life studying toy manufacturing, and design a doll to be exported to China which does even more damage than the nefarious Sky Dancer. They will put wigs and dresses on cans of mace, name them "Silly Susan", and ship the suckers off to China. Then China will retaliate by producing a robotic dog which responds to all commands, but has one small catch - it turns into a horrible killing machine whenever it hears the word "and"! Then it's only a matter of time before America and China start hammering wheels to atomic bombs and calling them "Super Fun Crazy Wagons." At that point you can pretty much kiss America good-bye, because at the rate we're buying Chinese imports, we'd be gone in seconds.

So what does Galoob have to gain from this? MONEY, and lots of it. Have you ever tried to buy an atomic bomb? They're expensive as hell, even without wheels! Folks, do yourselves a favor and stay away from the "Sky Dancers." Every person who purchases one is supporting Galoob's plan to turn America into a gigantic smoking crater of doom and possibly death. Come to think of it, that'd be kind of cool, so buy as many as you want. Just be warned that it's awful hard to update your page from a gigantic smoking crater of doom and possibly death, with a plastic arm protruding from your eye socket. Or so I hear.

Cranky Steve's Haunted Whorehouse, not content with simply reviewing the worst game maps out there, has expanded to reviewing terrible game mods as well. Today we kick off the festivities with Bezzy's review of "Real Life Quake", which attempts to make Q3:A like "real life." Yeah, the entire idea just reeks of success, doesn't it?

The other new weapon you'll find is the M16, which looks like it's been carved out of play-dough by a preschooler with an intravenous Paxil supply. That said, it IS a very good representation of a play-dough M16. But once again, after being wowed by modelling skills, our hopes are dashed as we press the fire button. Like a reoccurring nightmare, we find we have a huge arc of random fire. It doesn't matter whether you're crouching, running, or falling off a cliff; that random offset is constant. I guess it's fair enough - why the hell should players be allowed to shoot where they aim? That's not realistic! That's just STUPID! God knows sniper rifles were never made to shoot where you aim them, and most of the gun toting people I know run around aiming every which way but at their target... then again, they did go to the Bad Guy School of Shooting and not their local high school (where many a proficient marksman graduates every year).

What this world needs is MORE REALISTIC MODS! We can't get enough! Lay 'em on, barkeep, we're big boys! Check out the rest of the review here, flyboy.

I am indeed a lucky man. I have been graced with yet another email from the wonderful Cliff Yablonski. Allow me to share it with you.

I have added 5 new pages of jackasses and lowlifes from the Appleton area that I despise. now I have almost 50 pages of morons that I've either beaten or am planning to beat. when I hit 50 pages, theres gonna be a special surprise. Im not telling what, so dont even think about it, moron.

He is truly a saint among saints. Please feel free to examine the five new pages of people Mr. Yablonski doesn't seem to like. If you don't, I'm afraid he may bludgeon me to death with a wafflemaker.

Wow, That's Amazing has a special ed - er, special treat for all of us today! Yup, they have finished up their "How to Sex With George" guide, which effortlessly explains how to pick up members of the opposite sex, assuming you're a male. And the opposite sex is a female. Here's a little bit to tide you over until you have a chance to click the link:

To understand the George maneuvers, you must understand the essence of the female mind. You see, females are a lot like toaster ovens; they can't just make toast, but baked potatoes too! No wait, that's not females, that's toaster ovens. Women are really just like yaks. You can ride them, you can feed them, you can eat them and if you really want to, you can shave them. You can also get them drunk and then throw bricks at them while listening to the delightful noises they make… ”BROOOAAAAAA!!” Then they get mad and chase you. Now that I have enlarged your… knowledge of women and expanded your mind, you are ready for the most complex maneuvers since that thing where you are supposed to rub your belly and pat your head or that other one where you have to urinate INSIDE the toilet bowl.

It's like somebody was able to turn pure wisdom into electronic characters and display them on my screen! It's black gold! Texas tea! It's an article you should probably read!

Shocking secret of the day: I'm actually beginning to like The Mark Side. I'm starting to think he's pretty funny. Before anybody emails me messages questioning my heterosexuality and misspelling the word "ASS" repeatedly, let me explain that they just painted the apartment next to mine and I've been inhaling paint fumes all day.