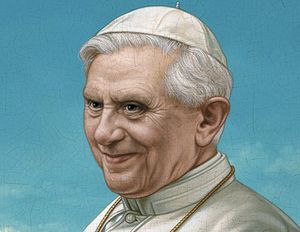 One, Catholics totally believe they are actually eating Jesus when they do communion, and that's plain gross. Like when we do communion it's just symbolic of his body and blood, but Catholics actually think they are taking a big bite out of His arm, and if I were Jesus I'd be getting pretty pissed at people constantly eating parts of my body, even though he can instantly grow anything back anytime he wants and even like grow a third arm or a second head anytime he wants to. But he doesn't want to.

Two, the Catholic Church is always spending waaay too much time worrying about Mary. Mary is really cool, and I bet she was a great mom if God wanted her to be his mom. I bet she was almost as good as my mom [Note: I knew Mr. Harding was going to show this to mom so I had to put that in.] But still, they build shrines and alters to her and name all Catholics after her so I'm pretty sure even the guys are named Mary. I don't worship my mom, even though she's a great mom and Mr. Harding makes her very happy [Note: I figured I should probably get both of them happy in case they found out I'm entering the mean streets of the internet again like I am now.]

Three, Mr. Harding said the word Catholic actually means "universal" and the universe is a science thing and science is the enemy of god. I bet if we got rid of science the world would be at least ten times better. Except motorcycles. I think cool motorcycles are a pretty good use of science. Ok, so those were my supporting statements for point one, which is that the Catholic church is dumb and the pope is like the king of dumb people who are wrong. 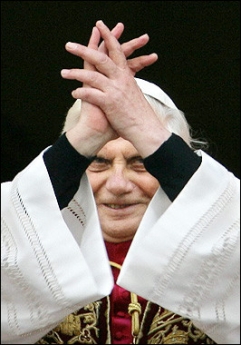 My second point is that everyone should just talk to Jesus straight on rather than trying to get some old guy to talk to Jesus for them. My first supporting statement for this is that Jesus is probably the busiest person in the whole world and yet he sits around listening to everyone whining to him all the time, and if he does that personally then I guess you should probably take the time to whine to him personally. If you have a old guy whining to him for you, then he'd probably be like "Blessed Art Me, I'm gonna do something like hide Joshua Taylor's car keys or make his mom find his internet history after he was looking at the Target.com underwear section. Thus the Lord, Me, art just."

My second supporting statement is have you ever heard a pope talk? They're always old and they mumble a lot and stuff. If you have this guy talk for you then Jesus probably wouldn't get what you wanted and then when He did what He thought you wanted you'd have to explain that you didn't want that and it would be like that time dad bought mom some earrings and she tried to casually ask which store he bought them from and then she told him she was with Mr. Harding now anyway and then he tried to throw a chair through the window but it got stuck halfway and he just pushed at it a little but it wouldn't go and then we all stood there silently for a minute and then he left. The chair was ok though. I pulled it out with Jesus's help.

My third supporting statement is that Jesus said, "Come to me and talk, and I will listen, for I cannot get enough of that sweet juicy gossip. Man, I love gossip. So sayeth the Lord." (Luke 4:13). That seems pretty clear, I dunno.

Conclusion (Summary of what you've told them)

So I have demonstrated my thesis (Pope sucks, Jesus rocks) using the following points: 1) The Catholic Church sucks. 2) If you think you should let the pope talk to God for you, THINK AGAIN. 3) The pope looks like a partially inflated condom that Picasso drew a frowny face on. I hope this has been helpful in helping you decide not to help yourself to the Catholic way of life, and I hope that Jesus and Mr. Harding both like this paper a lot.

Alright, I hope you enjoyed it. Keep enjoying the internet and may Jesus bless you and stuff.