Gifts of the Damned and Stupid

HOORAY FOR SOLAR-POWERED CHRISTMAS LIGHTS!Most of us assumed the mail order catalog industry died in a house fire in the 1960s along with three cats and an old lady. Unfortunately, it is still somehow alive and thriving in this age of brick and mortar e-commerce 21st century digital solutions. I suppose the secret is specialization. Where most stores specialize in selling practical items, and most e-commerce sites specialize in discrete anime sales, the catalog industry has transformed into a realm of absurd nonsense catering to the mentally ill. I would hazard a guess that catalog customers might also be the very same lonely middle aged loonies that strike up personal relationships with graveyard shift QVC operators.

Last week a catalog arrived in my mail from a company called Taylor Gifts. It mostly consisted of "AS SEEN ON TV" garbage, such as a Richard Simmons steamer that presumably makes your thighs as glittery as salmon scales. The other items, though, were spectacularly pointless. Some people might say crime is destroying society. If it is not crime, then it is drugs, corruption, terrorism, atheism, moral decay, the religious right, Islam, or Harry Potter spoilers. My gut tells me it is something else entirely. I am going to go out on a limb and blame the small minority of Americans keeping companies like Taylor Gifts in business for the decline of our modern world. Whoever these people are, whether they be Middle Americans or people living in trailers down by "the crik," they are killing us by promoting a marketplace for the dumbest products this side of a Skymall catalog.

I thought, since we're both here and need something to talk about, that we might take a moment to glance at some of these fine products. 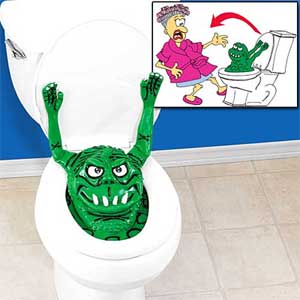 GIVE ME YOUR CROTCH!
The toilet has long had a reputation as unsanitary, what with it being a porcelain maw slavering for human waste, but now it can be a source of fun and amusement! Install this hideous monstrosity and the next time an unsuspecting person seeks relief in your domicile, they will get a ghastly surprise! In theory it sounds wonderful if you are 12-years-old or retarded, though the two tend to be hard to differentiate. In practice it will either make you look like a weirdo for installing novelty gags in your toilet, or, God forbid that it works, leave a mess in your bathroom. If you're going to scare the shit out of somebody, it's best that they be on the toilet instead of in front of it. Still, novelty gag or not, the notion of a green goblin jumping at my genitals is just plain insulting to my intelligence. 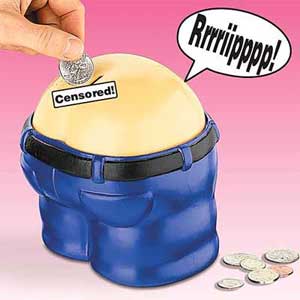 "Rrrriipppp!" --Fart Bank, July 18th, 2007
If your money wasn't dirty before, it certainly will be after you put it in this replica of the human rectal cavity. Aside from the sheer stupidity of a piggy bank in the shape of an ass that farts when you add money - yes, I really did just type that - I shudder to think of the Pavlovian applications such a device might hold. As a person with some level of dignity, I can think of a whole host of other horrible places to stick money that I would consider long before I purchased this novelty abomination. Horrible places such as:
Since we're in the gutter, let's come up with some other fart-based products.But then again, I suppose I'm elitist for not finding fart jokes funny. Up on my ivory tower soap box, it is easy to look down on this quaint ass-shaped bank versed in the language of the blue collar working man.