The Something Awful Guide to the Tokyo Game Show [PARTIAL]

Hello. The Tokyo Game Show is one of the biggest gaming events of the year, and I was overjoyed to get the call from Lowtax that all Something Awful writers dream of getting: "If you don't have something good up on the Tokyo Game Show, the site is fucking over, and if I go down, you go down. I swear to God I'm serious this time." So I packed my Switch and nothing else and set off for the Tokyo Game Show, which takes place in Japan, notable for being the inspiration for Ezra Koenig's Netflix original "Neo Yokio". I then booked a room in a hotel and sat completely still in the dark waiting for the Tokyo Game show to begin. Sadly, this soon became boring, and I returned home to Ireland. Luckily, there were some pre-TGS announcements taking place on the way to the airport, so I didn't return empty handed. Presented for your perusal are my notes in full; hopefully this will provide enough ad revenue from accidental clicks to keep this broken ass website from 1995 chugging along for another few days at least. Enjoy!

Zone of the Enders: The 2nd Runner - Mars

The screen is coming on, there's the Konami logo. Now everything's black. Now it's fading to red? Oh, it's mars. Mars the PLANET!? Oh wow, text is coming up, they're releasing a remaster of Zone of the Enders 2, that's pretty cool. Oh man, PS VR compatibility. Hmm, a screen is coming up saying "PRODUCED BY ???". Now a rep from Konami is coming out to give some more information. Apparently the ZoE 2 remaster will be released for PS4 and PC, and no one knows who the producer is, and we should just stop thinking about it. The rep is reiterating that we should all stop asking about who produced the game and we'll never know and that it doesn't matter. A release window is being given: Spring 2018! Exciting stuff.

They're playing a video of a horse coming out and a child is riding the horse. Now the screen is blurring and unblurring and now the horse is riding the child. Release date Q1 2018. The crowd is giving a standing ovation now. The horse looked really real. The famitsu reporter next to me is going ballistic and jumping up and down and yelling. It looks like Horse Game will be compatible with PS VR. A bunch of people wearing t-shirts with pictures of trains on them are attempting to storm the stage. Security is firing beanbags. A western release has not been confirmed.

Shadow of the Colossus 4K 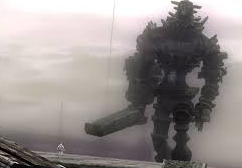 OK, there's a monster guy on screen. He looks pretty small. Kind of cute! This game will be a big hit with the kids. The camera is zooming in on

holy fuck oh my god it's so large. someone is screaming and it might be me. i sincerely can not tell. it's such a huge scary monster. it's so fucking big. i am closing my eyes. i cannot deal with this. i miss my homeland of ireland. i am opening my eyes to see if it's still NOPE an even bigger one is there now christ oh my god. my throat is beginning to hurt. i think it was me who was screaming after all. Do NOT buy this scary game.

A lot of Japanese text on screen for this one. I can't read Japanese. Now they're saying something in Japanese that I don't understand. I shouldn't have been sent here. I think I heard someone say Metal Gear. It is possible that this is a Metal Gear game.

A huge surprise announcement from Square Enix: a sequel to Final Fantasy VIII. Squall is back, and so are the rest of the SeeD gang. Junction your favorite GFs. Do sidequests. The unsung hero of Playstation era Final Fantasy games: The map screen. Don't forget to save and heal up before a powerful boss fight! Triple triad. Uh oh, it's Seifer! Final Fantasy IX. Is Japan one of the countries where you have to check in an hour before your flight?

A really sad looking man in a capcom shirt is coming on stage. He's speaking really slowly about the new Monster Hunter game. His voice sounds kind of like Droopy Dog. He's trying to explain how gear crafting works but he keeps having to pause to take deep breaths. I think he's trying not to cry. OK now he is crying. I'm not sure if this is part of the presentation or not. A lot of people in the audience are looking around pretty awkwardly. I really think I should be going. I think the new Monster Hunter is open world and it may have some online functionality. I don't know for sure. He was bawling pretty loudly by the end. I'm going to slip out through the back.