Alternative Explanations For The PSN Outage 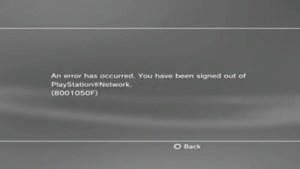 The PlayStation Network has now been out of commission for just over a week. The official explanation - a security breach requiring extensive forensic work and total reconstruction - sounds plausible. Too plausible. What if Sony's story is a cover-up of the highest order? What other catalyst could possibly be more embarrassing and catastrophic?

I have a few ideas.

The system was completely overloaded by the millions of users hurrying to log on to Home so they could walk around a virtual mall and watch advertisements.

The central server caught fire. Its replacement will be made of a new, more fire-resistant cardboard.

PSN never went down. This is simply an alternate reality game to get people excited for the PS4.

Kevin Butler ran out of VHS tapes to record Dancing With The Stars, so in a moment of desperation he erased every hard drive on the PlayStation Network to make room. Totally worth it.

Y2K was very much real, and has been biding its time.

Someone made a Little Big Planet 2 map called "Breaking PSN", and that game's toolset is too god damn powerful.

Sony executives were tired of Capybara's success. Making it impossible to buy Might & Magic: Clash Of Heroes was a calculated strike against those arrogant punks. Always strutting around with their shades. Ugh. Makes me sick.

This was actually an Al Qaeda attack. Not to make a political statement or cause terror, but as an attempt to dethrone Anonymous as the most self-righteous group of loosely linked douchebags on the planet.

The network was taken down to flush out all the hacks that came up with "It only does offline" jokes. They have been marked for extraction. PSN will be back once we are all safe from their humor.

Someone accidentally plugged the primary network cable in backwards, so all the information is flowing the wrong way.

Every computer at Sony HQ had to be repurposed to render a fake gameplay trailer for the next-gen Killzone game.

Sony decided to temporarily take the network offline until they figured out a way to turn Qriocity and Qore into things that people want to use, rather than product names you want to punch. Things are taking longer than expected.

I feel sort of bad about that last one. Veronica Belmont is way better than Xbox's Major Nelson, but internet comedy is a cutthroat business. Don't hate me!

A local time paradox struck the server room. The network hasn't been down for a week, it has actually been up for an extra three years and we're simply moving too slow to see it.

As it turns out, getting all the trophies in LAIR automatically triggers a glitch that wipes PSN.

Have you ever wondered what would happen in Portal if you stepped through one portal and shot yourself in the back with another portal? Yeah, sorry about that. At least I was able to register my copy on Steam before everything went haywire.

Portal 2
The first time that I've laughed at the dialog, level design (in a good way), and my actions as a player in one game. 10/10

Darkspore
Pretty much the opposite of Spore - no hype or developer-manipulated expectations, but lots of innovation and creativity in a game that gets progressively fun. 7/10

Cargo! The Quest For Gravity
Replace the creative duct tape that held Banjo-Kazooie: Nuts & Bolts together with contrived wackiness and poorer design, and this is what you get. 5/10

The Next Big Thing
Perfect for fans of 90s adventure games, at least the non-LucasArts and Sierra titles that had original concepts and unique art styles held back by terrible plots and puzzles. 6/10

Mortal Kombat
Now that the series is the best its ever been, maybe we'll finally get Mortal Kombat & DC Versus Street Fighter & Marvel. 9/10

WSC Real 11: World Snooker Championship
Only in a video game can you live the excitement of becoming the next Neil Robertson. 6/10