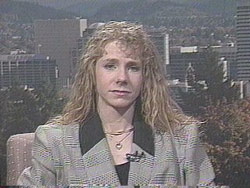 Tonya proves that Aquanet can be considered "product".There was a time when the idea of celebrating and encouraging the underdog was an integral part of American culture. It was before national media directly controlled perceptions and opinions, a simpler time when listening to a folk song or reading a book would give someone all they needed to know about the great characters of our history. In those days Tonya Harding would have been considered a great heroine, a character of legend who took on the arrogant favorite by any means necessary and managed to overcome. In a way Harding's story still is one of triumph, overcoming adversity and managing to excel in the impossibly rigorous world of Olympic figure skating despite her lack of education and her family's modest means.

It is at the moment where in different times Harding's story would have surpassed a mere family legacy of excellence and become folk heroics that modern society has dealt Harding her downfall. When Tonya Harding ordered the attack on the smiling and postured Nancy Kerrigan she simultaneously created and cemented her reputation as a villain. Truly, as that blow landed on Kerrigan's fragile birdlike knee the clever strike that might have been Harding slaying her Goliath made her instead a kind of Alighierian devil. A pathetic wretch clawing desperately for things she could never, and should never, have.

I wanted something different from Tonya Harding. I wanted to know more about the complex character behind the veil of the monstrous the mainstream media had thrown up over her. It was a sign of Harding's desperation that her initial reluctance to meet with me about her past, present, and future dissolved the moment I mentioned paying her.

Tonya Harding walked into the poorly air-conditioned Atlanta Steak and Shake restaurant with her head held high. My first impression of her was one of confidence, absolute and total confidence in her every action, a strange dichotomy when you consider the damage a single great mistake had wrought in her life. She was wearing a dark denim jacket with red-dyed leather tassels at the shoulders. As she turned to sit across from me at the booth I caught sight of the word "TONYA" written in awkward cursive on her back in a series of varicolored sequins. Her bleach-blond hair roiled up from her sweat-peppered brow in a tsunami of hairspray so thick I could see white integuments binding clumps together.

Before Tonya even spoke a word to me she consulted with her hulking bodyguard Louis, instructing him quietly to order her a milkshake and a hamburger. Louis was the sort of low-grade man child that shoestring celebrities often employ as muscle to keep up appearances and work as a butler. He looked Samoan and never closed his mouth completely, his greasy black hair coiling behind him in a dismaying rat tail that would have looked more at home creeping up the back of a 1982 Tito Jackson. He wore Bermuda shorts and a white t-shirt that was so tight I could see individual hairs on his chest pushing against the fabric. 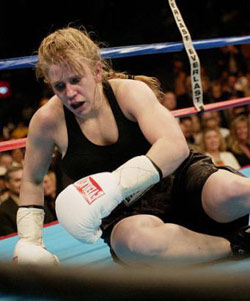 Figuratively and literally battered and bruised by life, Harding refuses to give up.Tonya smiled wanly at me when I offered to pay for her meal.

"Check just came in on the bear show," she explained. The bear show would be as good a place as any for me to start with Tonya's life as she told it. It was the latest for-profit degradation she had suffered, coasting along financially on her infamy rather than any talents she possessed. A rib restaurant in Atlanta had paid Tonya $2500 dollars to appear two nights before our meeting and wrestle a trained bear for over an hour.

"Huge fucker," Tonya had ineloquently described. "Looked mean as hell but Vic [the trainer] had told me he ain't bit nobody since 1994."

Tonya held up her arm and showed me where the bear had left red lines on the skin there. The bear's claws were capped with rubber but still obviously capable of at least causing minor injury.

"Some other guy there told me he ran an alligator pit in Florida. Said he would pay up to 3,000 for me to spend a half hour in their pond thing wearing a bikini. I'll probably do it when the money runs out again."

For a brief moment her confidence cracked and I could detect a subterranean river of sadness running through her. She was living hand to mouth and constantly letting herself be pushed into deeper and deeper indignities. Her mask returned as Louis arrived with a brown cafeteria tray holding her neatly wrapped hamburger, a basket of French fries, and a milkshake. I gave her a few minutes of quiet, as much to let her fully reassemble her composure as to satiate her hunger.

When Tonya seemed steadied enough I continued to go deeper, further back, working our way gradually towards the moment that had forever changed her life. I asked her about recent skating work she had done.

"Back in March I did a three-minute free skate in Columbus, Ohio right before the statewide tour of 'Bluejacket On Ice' premiered." Tonya beamed proudly. "They all got up and clapped for that. I was really happy with that."

It turned out that Harding, once a golden child of the US ice-skating community, was lucky if she got paid to perform at something even slightly more prestigious than the opening of a car dealership. She still recalls each event fondly, telling me about her daily show at the Oklahoma State Fair in 2002 and her walk-on cameo for Fox's "Mad TV". She even talks about other celebrities as though her vague brushes with them might build up her character further.

"I ran into Michael Imperiolini [sic] from 'The Sopranos'. You know, Christopher? He was pretty cute in person. He said he recognized me and we talked for a few minutes while he was getting his car washed. He was so nice." 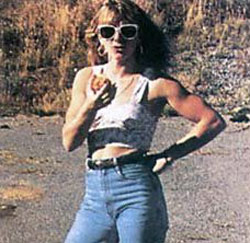 Harding never truly fit the well-off and achievement driven mold of superstar figure skater.Tonya describes other run-ins with increasingly minor celebrities, from Willie Aames from "Charles in Charge" ("He's doing a bible show now, how great is that?") to "Night Court's" Richard Moll ("He is a giant in person. Like a wall of beef. Pretty cute though.").

Harding does not come across as particularly smart or well-read, but she does seem clever. She obviously has a shrewd eye for opportunity and an almost superhuman (or inhuman) willingness to exploit it. During our conversation we are interrupted three times by patrons of Steak and Shake who recognize her. She autographs napkins and receipts and with each group she plies her trade, feeling out an individual person for a chance to make money. She talks at length with a balding man in his late fifties about his medical practice in the suburbs and even suggests that she might be the perfect choice for a commercial about his services as an osteopath. He leaves her his business card.

"People thought he dropped the offer after everything sort of faded, but I took him up on it," she confessed. "He agreed to a contract - I should get my lawyer in here - he agreed to a contract where if I did a guy-girl scene with hardcore then he would keep it under wraps until I hit 40. I'll tell you though, that 40th birthday seems closer every year."

She does not go into any further detail about the photo shoot so I don't press her. She declines to discuss her infamous wedding video. When I change the subject to arch-rival Nancy Kerrigan she stews for several seconds before replying.

"Goody two-shoes," Harding blurted. "You know? She thought her shit don't stink. Her family had money, they had her training since she was in her mom probably, doing little flips and this and that in her mama's frozen pussy."

Harding searched in her satchel purse for a pack of Newport menthol 100s. She held the long cigarette between her lips and the silent shadow of Louis fell over her with a burning Bic.

"Yeah, I feel bad. Don't you think I feel bad? I mean look at what that shit did to my life. I was never as good as her. I could never be that good. The world just wasn't set up to be that way. I tried to even it out, but it wasn't the right way. You know?" 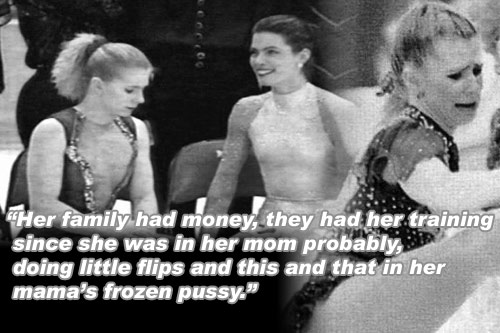 Harding wanted to master her destiny the only way she knew how, and she paid the price. She explains the inequity in the US skating team, the attention lavished on Kerrigan and the cold shoulder she so often received from coaches and managers. Tonya might have accepted the injustices of her relationship with Kerrigan had it not been for the way Kerrigan flaunted her family affluence and her easy talent.

"After a free skate Nancy would come back into the locker room and she would kind of, you know put her hands on her hips, and go 'booya!' right in my face while I was sitting on the bench. She would do that every time if I fucked up on the free skates and she stuck hers. One time I came in to practice and my uniform was all wadded up in the shower. I picked it up and there was a goddamn bloody tampon in there. I know it wasn't Kwan, she wasn't on the rag at the time, but Nancy had been talking about her heavy flows and I knew she was the only bitch on the team who would pull something like that."

Kerrigan had dozens of outfits, Tonya had only the one, and she had been forced to enrage her coaches by missing practice so she could have her blood-smeared skating dress dry cleaned. Tonya continues with anecdotes involving other bodily fluids and even a semi-rape by Kerrigan after Harding bested her in a national championship in Boston. Many of the tales are far-fetched, and I realize that Harding is playing me no differently than she played the folks who wanted her autograph. She sees me as a conduit for her message, a way to get some free publicity and maybe fire up some small-potato gossip columns in the sporting community. Her painting of Kerrigan as a villain is exacting and calculated; it even plays on my preconceptions of Harding.

My enthusiasm wanes and we continue the last few minutes of our time together mostly discussing the boring technical details of her various old and new skating routines. It's obvious that skating is still on her mind, but I don't really care. I hardly even glance at a crude diagram of a routine she has planned for a riverboat casino opening in St. Louis. When it's time for us to go our separate ways I stand up and wait for her to gather her things so that I can shake her hand and wish her luck.

"Hey, before you go," Tonya said, pressing close to me as I stood, "if you want me to come back to your hotel I can work out a price."

I was shaken, but she pressed on.

I didn't reply. I couldn't, I felt like throwing up. I walked out of the Steak and Shake and into the boiling heat of Atlanta, drawing ragged breaths that burned my lungs and wanting nothing so much as a shower.

For the reporters who keep emailing me and Tonya Harding's legal team: This piece is a work of satire.