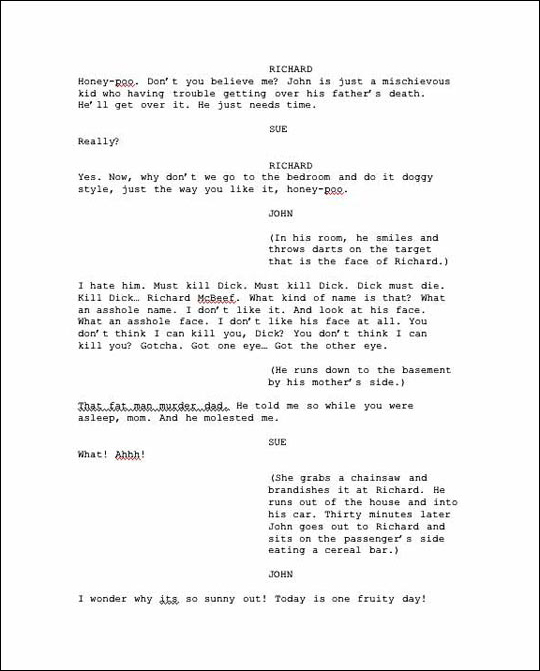 Note: Presented in its original form, this page of The McBeef Manuscript shows the changes originally intended for this play before its publication. Luckily, it managed to escape the cold, unfeeling spell check programs and Seung-Hui's "wrong" tenses and verb forms remain intact to this day. This preservation is almost as important at the recently discovered and restored epilogue of To Kill a Mockingbird, titled "Those Darkies Really Rub Me the Wrong Way."

Summary: Before the fight can come to a head, Richard McBeef promises his wife sex in exchange for forgetting about the whole "attempted murder and molestation" debacle. Following another rebuttal from John, she refuses, further cementing her instability as a woman, wife and lover. After all, who in their right mind would pass on sex with Richard McBeef? After having a chainsaw brandished at him by the out-of-her mind Sue, Richard McBeef retreats to his car, which is possibly impervious to chainsaw attacks. Once again, the cereal bar (perhaps the crux of Richard McBeef) appears after masterfully being placed in the breakfast scene by Seung-Hui. Perhaps this cereal bar will make John's day more "fruity?" Only the thrilling conclusion of Richard McBeef will tell.

Cho Seung-Hui's admittance of the stupidity of Richard McBeef's name is an excellent example of meta-fiction. Meta-fiction is when the author works commentary about the conventions or artifice of fiction into his or her writing! If you're familiar with the works of Thomas Pynchon, then you are well-aware of meta-fiction. Me, I couldn't really get into him. Yeah, yeah, his books are full of double-meanings and layers upon layers, but why does a book always have to mean something? Why can't it just be a story for the sake of a story? When it comes to reading, the Prof here likes to grab a Crystal Light, snuggle up in some patio furniture, and see what thrillers his good buddy Dan Brown has baked up lately. By the way, I dropped out of college after my first literature class!

Summary: In this powerful monologue, John unleashes his rage upon Richard McBeef. Obviously inspired by the "is this a dagger I see before me" speech from Macbeth, except with a cereal bar instead of a dagger, John's speech sums up McBeef's wasted life. In a way, McBeef represents the American middle-aged male: past his prime with no dreams and a tree trunk piece of ass. John represents the new generation, sick of people like Richard McBeef legislating morality and eating a Big Mac every 60 seconds (an obvious condemnation of the obesity epidemic in America). John tries to bridge the generation gap the best way he knows how: with a cereal bar. But McBeef destroys this bridge of common ground and understanding; he can only respond with "AHHHHHHH!" Thus, the two are destined to grow further apart.

John's mouthful on this page is an example of a monologue! The word monologue comes from the Greek mono, meaning one, and logos, meaning a large wooden object that can be later be transformed into paper upon which large speeches can be written. Actors, or faggots (as I call them), use monologues to practice acting when they're not practicing sodomy! Perhaps you know an actor? I suggest you go up him him, tell him you have Good News, and then drop The Bible into his lap (if there isn't a man in it already!). If you return and this man is still practicing his sinful ways, beat him to death with a different Bible. I'll have you know homosexuals pull the plows in heaven!

Summary: This final, haunting page is all the closure we have with Richard McBeef. It's entirely possible that this book is one of the many unfinished masterpieces, such as The Canterbury Tales, the novels of Kafka, or even If You Did It: A Choose Your Own Adventure Book by O.J. Simpson. However, many highly-bearded scholars suggest that this ending is merely Cho Seung-Hui thinking outside the box - something he was famous for on and off the page. Does John die at the hands of McBeef? Will Sue return with the chainsaw? And what of the cereal bar? These are all questions that will, sadly, remain unanswered. But perhaps in thinking like Cho Seung-Hui we can all tap into his unique problem-solving skills.

WHERE THE FUCK ARE MY LEGS