Rise from your grave, PowerPlay! 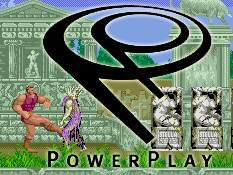 As many of you readers out there may remember (assuming you haven't blocked it out of your memories yet), I recently made a big stink about World War II Online and Valve Software's top secret superspy phantom alien technology, PowerPlay. I pointed out how Gabe Newell and cohorts made a gigantic stink about the magic of PowerPlay for roughly a year, then suddenly stopped speaking about it and went as dead silent as John Romero's career plans. During its apex of PR hype, Gabe Newell actually emailed me, offering to answer any questions I had regarding the technology behind PowerPlay. I replied with a message containing six questions that essentially asked how PowerPlay would be technically feasible. I looked forward to reading his reply.

It is now over a year and a half later and I'm still looking forward to his reply. I assume the Valve mail server is having some slight issues and Gabe never got the message. Even after I sent it again. And once more after that. Maybe he's just too busy making complex diagrams and flowcharts detailing all the retail mods and add-on packs scheduled for Half-Life. That's a fulltime occupation in itself, especially after considering the revolutionary technology that goes into these add-on packs, such as "slightly fatter security guards."

So you can imagine the look of sheer surprise and shock on my face when I found out that VoodooExtreme posted a breaking news story regarding PowerPlay yesterday. Much like in the game Altered Beast, PowerPlay has risen from its grave... only it didn't morph into a bear that could turn human-sized ants to stone and then magically fly through the air like a furry cannonball. In other words, PowerPlay is nothing like the game Altered Beast, especially since people have actually seen Altered Beast and can confirm it exists in this plane of reality. In the interview, John "I Don't Write Silly Pimp-Speak" Callaham reports that PowerPlay is now fueling some goofy startup ISP named "New Millennium Entertainment." Notice that they don't indicate which millennium they're referring to. That can only be interpreted as a bad sign.

Pricing will be $19.95 a month for the basic service, which includes access to their onlne gaming network which MacConnell revealed to VE will be powered by the PowerPlay internet gaming standard created by Valve Software and Cisco which was revealed almost 18 months ago. If a person commits to a year for the Game2K1 ISP, MacConnell said "If you and 9 of your clan members sign up for Game2K1, you get your own server instance to administrate and use as you choose." [Words highlighted for emphasis and to point out the sentence doesn't feature the word "which" 500 times like in the previous one, which we think is something which makes the sentence seem nutty, if you ask us, which you didn't, you witch. -ed]

Yes, that's correct, Valve Software / Cisco / New Millennium Entertainment / The Illuminati are finally starting to cash in on the elusive key demographic that every company has been competing for: clan members. I mean, that's just an incredible group to market your product at, particularly since clan members have the largest disposable income out of all non-incarcerated members of society! Other companies have attempted to capitalize on this demographic but so far have been unable to. You don't believe me? Well just take a look at these two clan-targeted ads I found on this thing called "The Internet" yesterday: 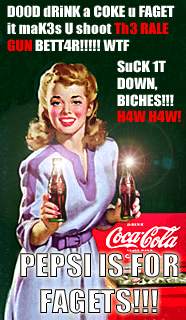 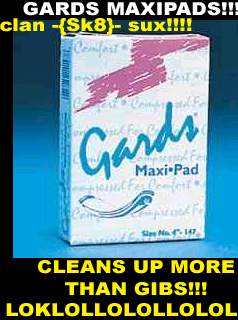 For some strange reason though, Coca Cola wasn't able to pull in the clan member demographic and had to instead settle for the normal 593827828 gazillion dollars they make a year. However, PowerPlay has something that Coca Cola doesn't: a very popular carbonated soft drink. No wait, Coca Cola has that. I can't really figure out what PowerPlay has that Coca Cola lacks, except maybe Gabe Newell and his ravenous appetite for fried chicken and sweet young interns.

Anyway, New Millennium Entertainment, which I assume is referring to the previous 1,000 years because they have a horribly embarrassing "All Your Base" reference on their webpage, is choosing to promote and publicize the fact that they're using the vague and mysterious PowerPlay technology in their ISP service. It'll be like a LAN party in your computer... and everybody's invited! Your 56k piece of generic shit will suddenly be outpacing T-1,000,000s and going so fast that your computer will spontaneously explode and pepper your lifeless corpse with white-hot shards of metal death! Gabe Newell will personally come over to your house and sleep on your couch! It'll make Half-Life seem like an entirely new game, which is good because Valve doesn't plan on releasing another game! Ever! The miracles of PowerPlay! Taking a cue from the Valve / Cisco PR slobs, who excel at providing 10-page interviews which don't say jack shit, the New Millennium website goes one step further and explains how their vague technology will use PowerPlay's vague technology to create what I can only assume will just be a gaming orgasm for everybody within a 500-mile radius.

What we created was a virtual online arcade, using specialized equipment that would prioritize the gaming traffic, and guarantee the absolute highest access to game servers. We plugged it into the only 100% optical network in existence - theBroadwing Communications backbone.

That's it. That's all the information they have to offer. Nothing more. But hey, it doesn't matter that they won't tell you HOW all these fabulously wonderful things will lower your ping rate. I mean, having an ISP that uses an internal optical network will surely cancel out the fact that your city's phone lines are old and outdated! Their Broadwing Communications backbone will undoubtedly speed up all the hops in between your house and their network! If there's a slow server in between you and your target destination, Gabe will descend from the heavens and shoot his horrible atomic eye-lasers at the facility, bringing upon them unspeakable vengeance and destruction! All for $20 a month! And an additional $25 a year! And you physically moving your computer into their server collocation room or finding a cable that can reach from your computer to their facilities! And also Gabe Newell gets to come over to your house and play Poker with his Cisco engineering buddies whenever he wants! What a deal!

So, in summary, the PowerPlay hype wagon continues to push on, fueled entirely by empty promises and half-truths. 18 months have passed by and NOBODY from either Valve, Cisco, New Millennium Entertainment, Sierra, Budweiser, or Jiffy Lube has explained HOW their magic technology works. They continue to bullshit their way into gaming news sites without ever stating anything of substance. Yet people continue to accept their word and just assume that since these are big companies that have their own water coolers and reception desks, they HAVE to be telling the truth. Well until somebody fucking explains how the technology behind PowerPlay will work or a living human being actually gets to use it, I'm going to keep calling this PowerPlay hype for what it is: a very popular carbonated soft drink. No wait, that's Coca Cola. I don't know what exactly PowerPlay is and I doubt anybody else does for that matter.