Where is My Country's Sense of Adventure? 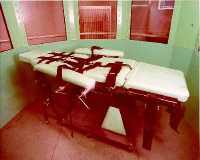 It takes "fun" to spell "fundamental rejection of our own humanity".While my occidental ancestral homeland of Great Britain has a reputation for pomp and circumstance, these United States have a heritage of garish pageantry and showmanship. From the circus ringleaders and puma wrestlers of the 18th and 19th century to the most modern preteen sex object beauty pageant or Bruckheimer explode-a-tron, we are a nation in love with entertainment devoid of substance. Using my Madame Cleo like powers of prescience I can determine that you are reading Something Awful, which is no more meaningful than the worst episode of "World's Scariest Police Chases in 3D". Don't get me wrong, I'm not some intellectual elitist striving for a utopia where we all read Greek Mythology and lounge around in togas discussing Plato and Heidegger. I like to watch "The Dukes of Hazzard" in my underwear and pick crumbs of potato chips off my beer-swollen gut.

The reason for my incoherent rant is that I am extremely disappointed in my nation's most recent show of selective morality; the non-deathmatch fatality performed on the highly non-esteemed Mr. Timothy McVeigh by an injectecutioner. I'm not going to get into a death penalty debate, but if you're going to go ahead and off some mustache-twirling mad bomber, you might as well make it fun for the whole family and apply that patented American media savvy to it. Dress McVeigh in some padded spandex, give him a wrongfully-accused female sidekick and send him out to do battle with a series of "Stalkers" in the hopes of winning clemency and a trip to Maui. Hell, even as late as the first half of the 20th century a public execution was big business in the United States. Hot Dog vendors would come out of the woodwork at the first sign of a lynching.

Continuing with the game show theme envisioned first by literary master Richard Bachman and then fictionally realized in the prophetic film "The Running Man", I suggest we make an execution game show. With retarded shit like "Win Ben Stein's Money", "Wheel of Fortune" and "Who Wants to Be a Millionaire?" I'm not sure the American game show industry is up to the task. This is precisely why I flew to Japan to work closely with some of the brightest minds in the "horrifying torture game show" business to bring you the concept of "Death Escape Battle Stadium 2000". 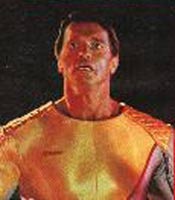 Better get going there, the school girls are catching up.Format: 2 hour live broadcast
Suggested Host: Damon Killian (if not available, Mark Summers of "Double Dare" fame)
Contestants: Any death row inmate with less than a month before their execution date.
Fabulous Prizes: Clemency, a trip to Maui, a Sony DVD player, a $250 dollar gift certificate from Borders.com and a new Ford Focus.
Events: There will be a series of environmental "physical challenges". At any point during these obstacles the competitor may be attacked by one of our DEBS2000 "Hunters". Each challenge will be timed by the "Arbitimer". If the host doesn't like the competitor or ratings slump the timer will be arbitrarily accelerated. When the Arbitimer hits zero, the contestant is informed that he's being dropped into a pit and has to fight for his freedom against robots dressed as Roman soldiers, only there are no robots. And there is no pit. He's just shot in the head with a rifle. Physical challenges include:Hunters: Six "Hunters" will be released at the start of competition, there goal will be to kill the competitor. The Hunters will be composed of:

I am looking forward to seeing the next execution in this extremely entertaining format. After all, what's the point of killing someone if you're not going to even enjoy it?

It's Getting Hot In Here!

Well of course it is, because we've got an all new Fireman Comic heating things to the boiling point! K-Dog has supplied us with another heaping helping of piping hot Fireman goodness, just have a look: