During the course of the US presidential primary one candidate attracted thousands of supporters from across the country yearning for a fundamental change in the way government does business. This candidate used the Internet to raise record amounts of money from supporters and mobilized an army of grassroots volunteers. This candidate also believed that we should revert to a barter economy and trade gold bars, pigs, and sacks of turnips for access to police and fire services. 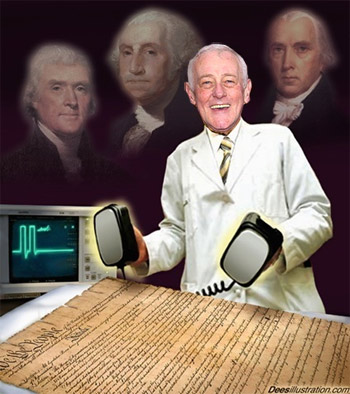 Over the course of Ron Paul's record-breaking campaign he collected tens of millions of dollars from gullible rubes, conspiracy theorists, people who want coin-operated faucets, and college hemp advocates.

John McCain has since secured the nomination and people are beginning to wonder how Ron Paul managed to spend so much money without anyone noticing him. They wonder how much money is left over and what he plans to do with it. These same people also wonder if what is in turkey dogs is as gross as what is in hotdogs.

Ron Paul raised over 28 million dollars from his contributors. Most of the money was raised in the 4th quarter of 2007, when support for Paul was at a fevered pitch, but before people realized nobody was going to vote for Ron Paul. During the course of his campaign Ron Paul spent a little over 22 million bucks.

Ron Paul spent outrageous amounts of money buying TV ad time on various local and national networks. However, Paul's campaign spent virtually nothing on making the ads themselves. He relied on a variety of non-actors and non-directors to create heartfelt pitches for his candidacy. These homespun amateur ads had mixed results.