With almost 6 million bucks left in his account a lot of people are wondering what Ron Paul plans to do with all of his money. No decisions have been finalized yet, but Dr. Paul has some very ambitious ideas about how his supporter's contributions should be spent. 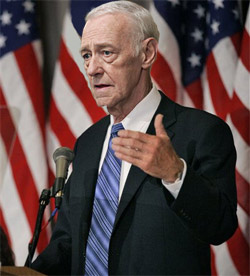 $1.2m to the West Texas College of End Times for the study of chemtrails.

$920,000 to the Liberty Foundation of Constitutional Economics. This grant program will provide research funding for young economists to research economics. Current grants under consideration include: "Getting the Government Out of Our Escalators and Elevators and the Benefits of Privatizing Public Staircases," "The Importance of Protecting AIDS Drug Copyrights in Africa," and "How to Organize Communities to Put Out Industrial Chemical Fires Without Government Assistance."

$750,000 to the Bible Genome Project. The money is specifically earmarked for isolating the bootstrap gene God created in our body.

$620,000 to the Iriving Historical Institute for Holocaust Investigation. Because if it really happened we shouldn't be afraid to investigate it.

With his campaign coffers emptied, Ron Paul will do the only logical thing. The thing Ayn Rand would have wanted. He'll begin to fill them up again in 2012.

Special thanks to Lowtax and his crew for the campaign ad and Dees Illustration for an endless number of wonderful Ron Paul fan art masterpieces.