Ron Paul's campaign was certainly unconventional when it came to getting the word out about the candidate. Next to TV ad buys the biggest campaign expenditure was devoted to plastering Ron Paul's message across the sides of various forms of transportation. Most famously, there was the Ron Paul blimp. Fantasy Wolf Blitzer described the blimp as, "Amazing...amazing" and Ron Paul supporters flocked by the tens to witness its droning flights over confused population centers.

The blimp truly captured the imagination of the movement, who enjoyed imagining it was actually advertising the candidate effectively and also enjoyed imagining themselves in an alternative reality. They were in a steampunk libertarian utopia, sending their children off to work in the coal mines while the dirigibles buzz overhead, their aluminium bodies plastered with advertisements for the latest colloidal silver elixir. 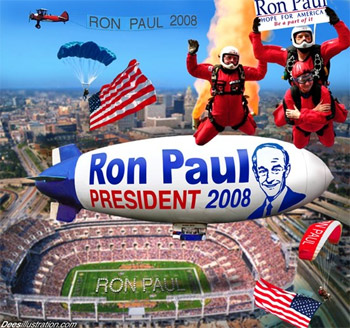 There was also a Ron Paul boat, but this was confined to a harbor in New Jersey when Ron Paul supporters refused to submit to the will of the fascist surveillance state and register their boat with the Coast Guard.

The Ron Paul campaign invested more money in ways to annoy voters than all of the other democratic and republican campaigns combined. Their closest rival was Rudy Giuliani, who somehow spent $800,000 in New Hampshire walking door to door interrupting families, ruining their dinners with blood-curdling tales of 9/11, and terrifying small children with his unfortunate face. 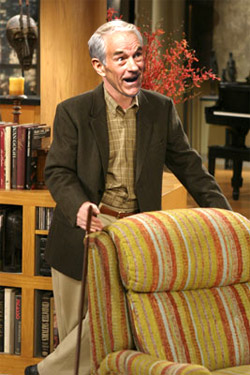 For his money, Ron Paul was able to purchase and deploy every annoyance technology available to the civilian. He had supporters with giant view-blocking signs at every TV event and loudspeakers for people to chant Ron Paul slogans like "9/11 was an inside job!" and "Bush and Cheney are using chemtrails to control your family!" He passed out maracas and drums, his campaign distributed electronic fart machines, and they were not above hiring mariachis to barge into debates.