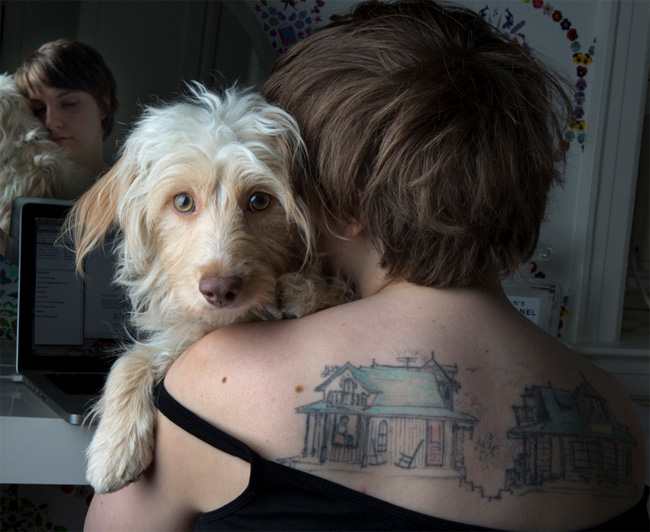 A lot of you have been asking where Wolfy is these days since he's always been the star of my 'gram and I've been posting pics of my 'bradoodle besties. Yes, Wolfy was bigger and older and my two 'bradoodles are cuter and more fun. Sure. But that's not why. Well, you know honesty is my jam but this one has been really heartbreaking to talk about. Thankfully, I am very brave and extremely honest. I have known I had to share what happened with Wolfy even though I am certain some people are going to use this against me in a completely unfair and vindictive way. That's okay! It's part of being heroically brave.

After four years of being a piece of shit idiot, Wolfy is gone. That fluffy moron would chew lamp cords, he would make messes, he licked a cancer kid's birthday cake, he growled at the sun, he tried to bite me when I gave him treats and he was racist. Extremely racist against blacks and even worse towards trans people. He never thanked me for using him in the Vogue shoot or any of the publicity shoots. Basically, Wolfy was the number one worst dog. I don't blame him, he was abused and had numerous owners before someone (me) had the courage to offer him a forever home. Bouncing from house to house turned Wolfy into a psychopath and no amount of aroma therapy or instagram photos or walks with me to the Gelato place would convince him to chill the eff out.

After four years of this aggressive and very challenging behavior that could not be treated with horse tranquilizers or being an extremely excellent furbaby mom, I had to get rid of that furry piece of shit ruining my life. His masculinity was toxic, he no longer looked anywhere near as cute anyway and he was stinking up my 'gram. Wolfy went to live at an amazing facility that I looked up online and had my assistant contact. I was very sad to see him go because I love him so hard and so selflessly, but I packed him up in that cardboard box and gave him to the FedEx guy to drive to Los Angeles. This is a facility that deals with troubled pets. It dealt with King, the ball python that tried to eat a child on Snapchat and Louis, the goldfish that was kicked off twitter for tweeting "seig heil" to the president.

Someday I'll write about what a relief it was to see that evil fucking dog go off and really be Wolfy, pissing and shitting himself, wrecking the lives of good people, and enjoying the sound of white men using the n-word. There were so many lessons in it, about accepting myself for being such a great furmom and persevering through so many struggles that would have made other people give up. My assistant wanted to give up several times when Wolfy snapped at her, but I kept going and hired a new assistant who would not threaten to quit every time she had to get stitches in her fingers. And even though I don't believe in god, I believe that god has a plan for Wolfy, and he wants to thank me for being like a modern day saint for helping Wolfy.

Shout out to to Craig Crispens, Lourdessa, and Jameon Ritzobitzero for loving Wolfy even when he dragged his miserable dog ass all over the carpet and expensive couches and ate all the green tea we bought to make green tea cake but my fucking dumbass assistant Bekka (Bekk-ugh) left out on the counter even though I told her to put it in the canister. Basically I had a monster dog and a dumbass assistant and also that lady who yelled at me for leaving Wolfy in the hot van even though it was for like an hour tops and he had an entire cup of noodles I gave him off the food truck.

I'm good now. I have my 'bradoodles and they fill the hole in my heart left by Wolfy who I will always care for well above and beyond what any other person would because I am so good. I'm just such a good, loving mother to him at a distance while he gets to be himself at that place I found online. It's basically like a big building for dogs where bad dogs get to do whatever they want. And yes, most of them fight, but that's like what dogs were bred to do for centuries and all those centuries of abuse are just what I was trying to deal with.

PS If you have a similar situation, please know its possible to responsibly re-home your worthless idiot dog rather than sending him back to the shelter system even if it is against the agreement you signed with the no-kill shelter that you adopted your monster dog from. It can require patience, diligence and often a financial contribution but there are solutions that leave everyone happy and safe. You will always have been your dog's first stop outside shelter life and that's beautiful. It's like being the first mother of an orphan in the real world and then helping break that orphan in for the next mother who can actually feed the orphan the right combination of pills and violence to break him down.

Also the shelter might say some bullshit about Wolfy never being abused and actually being a good dog but they did not see the breakdown he had when Donald Trump got elected. Wolfy just sort of snapped at that point and there was nothing I could do and he was losing his social media engagement and I had to go in a new direction. But honestly they should be thanking me for bringing attention to the plight of dogs. I posted eighteen photos of myself topless from the back and tagged them with the shelter's name. So we are more than even and they can stop lying.

You can read more about this in the next issue of the magazine named after me.