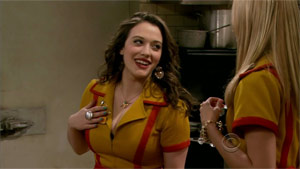 To consider, as Habermas puts it, the era of neue Undurchsichtlichkeit, we arrive at the obscuring nature of modern life under the hegemony, where we believe ourselves liberated by the chains of our enslavement to the order of capital. We expend countless hours of labor to purchase technology, smart telephones and vibrators, which shackle us to our masters. To act out as Marx advised against such structures is to predestine failure. Max, who has shed the "r"esponsibility of action, instead embraces Caroline, who once enjoyed the dominance of wealth, and teaches her the reification of service labor as tips. Together they mock capitalism by failing to sell cupcakes, a clear metaphor for the devaluing of sexual commerce in the age of PornHub. 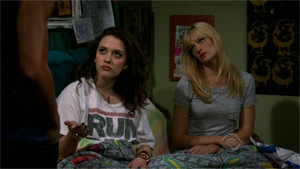 Caroline wishes to help Max with her break-up with boyfriend Robbie. Caroline, as Kierkegaard, scorns the idea that man will always be wrong when viewed through the eyes of god or Hegelian deconstruction, believing that it is only man, or the concept of man, that can rescue a failed relationship. This overbearing linkage of Kierkegaard to problematic gender struggles overstates the value Max (Marx) has placed on Hegel in her rediscovery of this struggle through the process of breaking up.

Of course, to attempt, as Hegel, to deconstruct events in the context of absolute objective reality is to face the consequences of impossible complexity, as natural systems shrug off the efforts of the analyst. Caroline becomes overly drunk, the potion "DRINK ME" consumed to allow Alice to be on the level of crumbs and insects, a skewering of the Marxist notion of intellectual class structures developing from the destruction of traditional class. Their friendship is restored within this egalitarian paradise of intoxication.