Scientific Creationists Must Be Destroyed

LOL is an Internet acronym for "laughing out loud".I hate creationists. Let me get that right out in the open because I really want to be honest and forthright here. I never hold religious beliefs against people as long as they generally keep their beliefs to themselves and don't try to ram them down my throat. Creationists are a wholly different breed. They not only want to ram their fantastic beliefs down my throat and your throat, they constantly strive to shove them down the gullet of every kid attending public schools. Think about the number of times creationists have managed to convince some gullible school board in Missouri or Texas to actually teach their made up mythological horseshit as if it were fact. Then to attack evolution, not to mention human history and biology, they attempt to invalidate scientific methods by rattling out the same old list of idiocy about carbon dating being incorrect and cavemen jousting from the backs of pterodactyls five hundred years ago.

I could devote this rant to refuting creationism's moronic claims, but frankly that is always an exercise in futility. Anyone stupid enough to believe that the world is 6,000 years old couldn't be convinced that their blood is red if you cut out their heart and shoved it into their eye socket. But their aggressive stupidity cannot go unassailed, so I am going to blow the lid off some of the claims that the creationists DON'T want you to know about. These are the equivalent of the crap about the volcano and Xenu that the Scientologists will hide from you until you dump about a million dollars and twenty years into their pyramid scam. Creationists instead wait for your children to finish their high school classes on "creation science" that have been forced upon them and then the creationists pounce, letting your kids in on the amazing secrets of creationism.

Because about three fourths of what is written in the Bible has been totally discredited by science creationists have embraced two tactics. Their outward tactic is to attempt to discredit science by citing dubious "facts" and pieces of scripture. To maintain a large number of believers they have also secretly developed "creationist science" which borrows heavily from both the Bible and science yet manages to be ten times more ridiculous than the stupidest folklore about a fish giving birth to the world from the clouds.

Secret Number One: Jesus was a Single Celled Organism

The father, the son, and the holy blob.Creationists believe in the concept of "intelligent design" which, in a nutshell, is that nothing as complex as say the human eye could have developed naturally so there must be some intelligence (read: God) guiding the design of all life. This is a common creationist argument, but what they don't tell you about are the specifics of intelligent design. They believe that God sent Jesus down to earth before the world was populated. Jesus was a single celled organism that was a sort of experiment used by God to test the proof-of-concept of various life he wanted to create. God would beam psychic instructions to Jesus' nucleus and then Jesus would morph into all of the various organisms that would soon and suddenly populate the world. Think of it sort of like God is the little kid from "A Boy and His Blob" and Jesus is the blob, and all of the holy psychic messages are various jellybeans that God was feeding to Jesus. Then, after God had picked out the animals he wanted, he fed Jesus the jellybean that turned him into the hole and he appeared in heaven next to God.

After that, things get a little muddy, which is cool since God is like the ultimate argument trump card. If you try to refute anything related to God by, say, arguing that he couldn't have populated the earth in a day, they can just trump you by saying "God can do anything because he is all powerful". Then when you point out that God hasn't done a lot of shit he probably should have they'll just stare off into space and say "it's all part of God's plan". That's when you hit them in the base of the skull with the sap and drag their body into the basement. 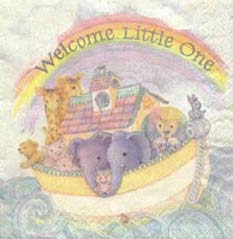 The most realistic depiction of an impossible vessel ever to fit on a napkin.Saying Noah's Arc was magical is a "no shit" sort of proposition if you're going to buy into the party line about two of every animal being stowed on board. Since the creationists believe that all life was created at once and no life has evolved naturally that means that there were over 30 million pairs of animals on board Noah's ship. Noah's family and over 60 million animals spent a hell of a long time on board that ship while the entire world was covered with rain water. While on the Arc they had to feed all of these animals something other than each other, which means there was an absolutely staggering volume of food of various types on board the ship. Unless! That's right; Noah's Arc had magical chambers that put the animals in suspended animation for the duration of the voyage.

By the way Noah's Arc was five hundred miles long and made out of HOPE AND PRAYERS! Silly motherfuckers.

Secret Number Three: God Lives in a Space Ship Disguised as the Sun

The majority of creationists believe that the earth is the center of existence. While they do acknowledge, at long last, that the earth might actually revolve around the sun, they refuse to throw away their ego and take an objective look at the world around them. This means that in their cosmology God IS the sun. Or to be more exact God's space ship is disguised as the sun. I know what you're thinking, but the Bible was always pretty vague about God and heaven and just because you got the impression it was some magical other dimension doesn't mean that's the case. In fact it's a lot more bad ass of God to exist in the same physical realm as us, and almost incomprehensibly bad ass for him to have a giant spaceship that's even bigger than our planet. That just shows what kind of high roller God is. He has dice hanging from his space mirror bigger than the moon and all of the people who went to heaven/sun space ship in the past can fit into one tiny room on deck 15. 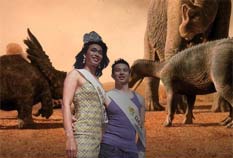 Dinosaurs depicted here assuming their battle form.Man's hatred of dinosaurs dates back almost 6,000 years to when the world was first created according to creation scientists. Man had one look at a tyrannosaurus rex, threw a spear that left no evidence in the fossil record, and thousands of years of war erupted. You might ask yourself "self, if man and dinosaurs existed at the same time then why aren't there any examples of man and dinosaur together or even near each other in the fossil record?" Allow me to answer that question with the secret truth the creationists aren't telling you. Dinosaurs had a "true form" and a "battle form" they could assume when they needed to. Their true form closely resembled that of man, but by using their ancient (probably Satanic) magic they were able to take on the shape of a variety of dinosaurs. Over time the dinosaurs forgot how to assume their battle form and could only use their true form. Mankind still hated them, but the all male dinosaurs discovered they could pass for human and even interbreed with humans, allowing them to infiltrate our society like unholy Terminators. Today dinosaurs can be identified by homosexual behavior. They are reverting to their roots and seeking out other dinosaurs to mate with AND WE CANNOT ALLOW THIS TO HAPPEN.

Secret Number Five: Catastrophic Events in the Fossil Record Were Caused by Angels 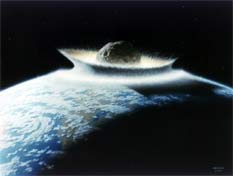 OH HO HO THE ANGELS ARE BOWLING AGAIN!You might have been able to guess this last one even if you weren't clued in about creationism. Not surprisingly they believe that God and his menagerie of cosmic hand puppets are directly responsible for everything from El Nino to a giant meteor wiping out the dinosaurs "6,000" years ago. This way they make it seem like God is playing an active role in the goings on around town, despite the fact that most natural catastrophes have fairly straightforward scientific explanations. So the next time you feel a little gust of cold wind blowing up your skirt just remember that's the Watcher Angel Gethel trying to get some up-skirt shots on its ephemeral digicam.

Creationists are the bane of logic, doubly so because they cloak their superstitious nonsense in supposed logic by referring to it as "scientific creationism". Worse still they are persuasive, particularly in areas of this country where Christian extremists have control over the educational system. Oh, wow all of human and animal history condensed into six thousand years! Yeah, thanks retards, I remember your shtick back when it was about Zeus and lightning. Get thee to a nunnery and don't come back.

Hello, Livestock here. I trust you all survived the terrifying events of 8-15 (never forget). I want to apologize for that. I was just trying to get rid of weekend updaters Ben and Reid at the same time, so I hatched this crazy plan to turn on all my appliances at once and overload the power plant causing a massive domino blackout that would consume the two of them. It worked beautifully, until Ben showed up on the Internet unscathed by the murderous hordes I expected to arise from out of the powerless masses. Anyway, this nonsense has nothing to do with the fact that Photoshop Phriday has become infested with bugs playing sports. Yes, bugs playing sports. The Something Awful Forum Goons did a bang-up job as always. Just look at these bugs playing sports! I would highly suggest you do not pass this edition of Photoshop Phriday up. Unless of course you have no electricity, in which case you can't see what I'm typing now and have no idea how much I want you to read this.