The Internet is a Sad Sexy Place 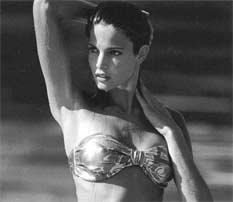 The Internet had an extremely brief period of relative innocence.My first experience with pornography on the Internet was downloading non-pornographic photographs of supermodels, their nipples straining at the fabric of wet bathing suits, through the narrow pipe of a 9600 baud modem. It was like the sexual revolution of the 1960s minus the psychedelic drugs and having an actual partner to have sex with. My young eyes were opened quickly to a world of angry flaring assholes, people eating human excrement, and a shocking revelation about the dual meaning of the word "bear". It was by virtue of pure luck that I made it through a hellscape of hardcore pornography relatively unscathed. While most kids were busy pilfering their dad's collection of dog-eared Playboys, I had relatively ready access to an even then incalculably vast stockpile of the most repulsive porn imaginable. With a few minutes searching and downloading I could be staring at an indexed color image of a woman, seconds away from giving birth, and surrounded by mask-wearing Japanese men ejaculating onto her swollen belly.

Much has been said on the Internet and even by me about pornography - hell, most of the columns I write for Something Awful deal with porn in one way or another - but I'd like to diverge from that generalized rant. The availability of hardcore pornography is just one facet of the problem I would like to address with this article, and that's the formation of new sexualized subcultures that use the Internet as a jumping off point. Many of these subcultures have been touched on or more in the space of our Awful Link of the Day, and while many are quite amusing and harmless, many more are not harmless. 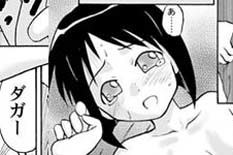 The spread of pedophilia and child porn on the Internet, along with the almost equally disturbing growth of support for these activities in the general Internet population, has placed me in a decidedly uncomfortable moral position myself. I am an extremely socially liberal person. I believe that women should be able to abort their fetus the week before it's born, I believe that the government has no business making marijuana and some other drugs illegal, and most importantly I believe in the total freedom of someone to say whatever they want. At the same time I am horrified by this growing shift in the way people view pedophiles and the way pedophiles view themselves. Thanks to the Internet they gather together on forums and websites and share fantasies, discuss their attractions, and nurture one another's borderline criminal sexuality. Loathe though I am to admit it, stopping them through legislation as long as they are not harming any children seems nearly as abhorrent to me as the concept of what they are doing.

I'll get back to this idea before I finish the article, let me indulge my informal essay and continue by discussing less legally dubious and hopefully more humorous subcultures.

Since I took this gig writing for Something Awful almost three years ago I have encountered an increasing volume of perversity on the Internet as part of my job description. I've gone from randomly encountering it, to actively seeking it out for the purposes of mockery. I've found individuals and groups that have sexualized things like sneezing, farting, popping balloons, inflating latex or rubber body suits, and most frequently, I've encountered furries. 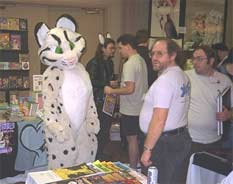 They are multiplying like balding, overweight, and sweaty men in rabbit suits.I won't bore you with the complete history of the furry culture, but needless to say it is relatively long, convoluted, and owes the penis-sheathed lion's share of its popularity to the Internet. It has gradually transformed over the years from a slight fixation with anthropomorphic characters to a lifestyle choice that involves donning elaborate costumes and awkwardly humping in convention center hotels. The bottom line is that furries would basically be nonexistent were it not for the Internet. They would be thousands - maybe tens of thousands - of healthy and relatively well adjusted people with maybe a slight fascination with Gadget from "Rescue Rangers. In other words they would be "Mundanes" as the furries call the rest of us with hilarious derision.

Unlike child molesters, furries aren't hurting anyone or anything beyond maybe their parent's dignity, so why should we care? Because, furries are perhaps the best example of the uniting power of the Internet gone wrong. Composed almost to a person of outsiders, nerds, and the generally disenfranchised, furries went from a sort of dorky support group to a hardcore, aggressive, and somewhat abrasive sexual identifier in a matter of a few years. IRC rooms, websites, and even the presence of furries in various more normal Internet locales have attracted those who have difficulty finding their place in this world. There can be no convincing argument made that their lifestyle is genetic, necessary, or anything but forced. They have latched onto the lifestyle purely out of desperation and a need for acceptance.

Once they are a part of the furry lifestyle they devote all available energy to it almost without exception. They draw furry art, write furry stories, attend conventions of likeminded individuals, and in extreme cases don the aforementioned suits and commence humping. Some even go to the borderline psychosis extreme of acting out a "fur" identity at all times by using their furry alter ego and its fictitious behavior in an almost spiritual sense on a day to day basis. For some being a furry is roughly analogous - in terms of the impact it has on their life - to being a member of a cult, although I'm not even suggesting that I expect furries to consume poison Sunny-D en masse any time soon. 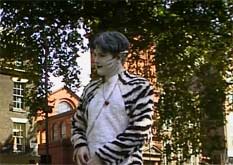 LARPer sadsack or furry degenerate; you be the judge!Furries are the most obvious example of a pervasive trend on the Internet for spontaneous, almost unexplainable, and definitely bizarre sexual identities to be created from scratch. From there they are enabled by the Internet to snowball out of control, picking up the debris of society that might have otherwise found a respectable or positive way to contribute to our culture. I hate to admit it, but there are a few really fucking talented furry artists, and it saddens me to see them shit away their skills drawing anthropomorphic reptile penises because they shackled their identity to an Internet-based cultural phenomenon. I can't really struggle through reading much furry erotic fiction, but I'm sure there are some genuinely talented writers buried amidst the whale vagina insertion stories and sexualized cannibalism yarns.

I've talked about how the Internet enables pedophiles, furries, and others to congregate and share ideas, but I only briefly touched on the most important aspect of this. In the endless expanse of communications the Internet is, probably the greatest and most terrible gift it offers to furries, pedophiles, and others, is the ability to shut themselves off from the mainstream. They huddle in cloisters that are virtually unassailable by the outside world and whisper encouraging things to one another that would be nearly impossible to say in real life. Free from the pressures of society to conform to a boring standard they go in the exact opposite direction, externalizing things that are roughly as far from "normal" as can be expected. Then, within their protected virtual enclaves, they declare these things to be the norm. By declaring their perversions, mores, and general imbecility to be their own status quo they have simultaneously validated their own existence and demonstrated the inferiority of outsiders.

I apologize for being so verbose and relatively serious on this topic, but it has concerned me for quite some time and I felt the need to expound on it. I appreciate those of you who have indulged me thus far and promise I have plotted a direct course for the ultimate conclusion.

Let's return, at last, to my moral dilemma regarding government intervention. My belief in the human right to free speech trumps any bone-deep desire to see all of them - pedophiles, inflation fetishists, furries, etc. - burned by black-suited teams from the NSA carrying flamethrowers. I respect their right to say all of the stupid and horrible things they say, their right to draw children being violated by old men, and their right to compose epic ten volume sagas about a bipedal horse that can insert buildings into its foreskin.

I respect these things, demand that they be afforded their rights under the law, and then I turn to virtually everyone reading this and I say "let's fucking get them!" As long as they can hide in their IRC rooms, message boards, and websites they can shield themselves from perspective. That's where every single one of us has to come in, actively pursuing an aggressive and unwavering dialogue with each of these groups that we encounter. Don't turn your eyes from their websites, spam their guestbook with a thousand repetitions of "HORRRRRRRRRRSECOCK" displayed in 72 point red letters. Invade their message boards and tell them how detestable they are. Upload insulting illustrations to their art sites. They will draw in on themselves and ossify, while any who might be lured in to their clutches will see the horde clamoring at the gates and turn away.

This is the sort of activity we have always advocated here at Something Awful; the sort of juvenile behavior that I am honestly proud to support. I hope this piece has given you some insight as to why I think it's more than just an amusing diversion.

Greetings Photoshop Phridaykateers! Livestock here with the lowdown on the new Photoshop Phriday. This week we are kicking off a two part series exploring the myriad artworks of Thomas Kinkade, the self-proclaimed "Painter of Light." We feel he is a big douchbag, but that's just our opinion. As always, the SA Forum Goons crafted a large number of images not unlike this one: Please do us a huge favor and read our free comedy feature!