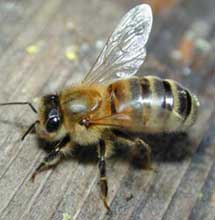 So what did you honestly expect, that I was going to find an appropriate image for this update or just type "bee" into Google Image Search and use the first result I saw? If you are at all surprised maybe you haven't been reading this web site long enough.WASHINGTON - 11-year-old Katie Shue awakes in complete darkness, chained to a rusty crate inside of her family home in rural Iowa. She's trembling, unaware of what might come next. Like many children her age, she's training for the upcoming national spelling bee, a two day competition hosted by the E.W. Scripps Company, a non-profit organization. In a few days young spellers will come together and decide who is the best speller in the nation because, you know, for some reason some people care now.

The spelling bee is predominantly an American infatuation, largely meant to trumpet our ability to spell over other nations such as France and Great Britain who unlike Uncle Sam are much too poor and weak to educate their children. Like most American traditions the spelling bee started as a drunken bet at a local tavern.

Two inebriated men were arguing over which of their kids was the superior speller. At 2AM they went home, woke up their children, and pitted them against each other in a spelling competition. The whole town awoke and joined the festivities, signing up their children to best others in the spelling brawl. The child that won that night grew up to be the President of the United States, Dwight D. Eisenhower. And now you know, the rest of the story.

Since that fateful night when the American tradition of pressuring your children to engage in competition in order to live through them and/or show how great of a parent you are and take credit for all of their accomplishments was born, the national spelling bee has delighted millions of people who want to see nervous kids stress out live on television.

Today Katie's mind is on the competition and has been since she turned six. "We don't want to start them too young," her mother explains. "That kind of pressure is just too much for a child. Friends, family, a life of her own, those things are just so important to a child's development. Katie has all of those things to look forward to after the competition, we've assured her." 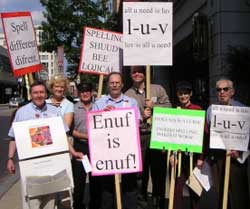 The spelling bee is facing fierce opposition from non-spellers such as the residents of Kentucky.Budding, or should I say, buzzing spellers, don't just memorize words. They study etymology, the study of the history of words. "Mems, as we like to call them, can do well in local competitions, but get stung when put up against serious spellers," says Dr. Ruthersford, spelling captain at James Washington Elementary School. "To do well you need to have a solid background in word history and Latin. It's easy to spot the memorizers, and it's crucial that we call them on their bullshit in the middle of a word and embarrass them in front of their whole family. Posers."

So how do parents cram all this etymology into their kid's brain? It's simple. Crates.

Crate training is the standard regiment for all spelling bee athletes looking to seriously compete at Scripps. Experts agree that crate training is the most robust and humane method, replacing the tired and true method of physical abuse and fear of death that was banned in 2003 by Scripps. Some may be put off by the name. After all crate training sounds very similar to "crate training", a technique for housetraining canines. Crate training for children is completely different and is actually quite pleasant, and most importantly of all, effective.

The training starts with an ordinary spelling bee crate, similar to what you would use to housetrain a new puppy. Whether the child is spelling or not spelling, he or she lives in the crate. This method of training uses positive reinforcement. Katie's parents explain, "We never force our daughter to spell if she does not want to. Positive reinforcement means that we reward her when she does well and performs to expectations."

For every word Katie spells correctly she earns a minute outside of her crate up to a maximum of 30 minutes per day. She can then use their free time to engage in other stimulating activities in order to take her mind off of the high-pressure world of spelling bees, such as reading the dictionary. "We tie Katie's freedom to spelling words correctly. That's positive reinforcement."