Old people disgust me. They are wrinkled, they are rotten, they are filled with disease. They are crabby all the time, always complaining, bringing misery to all around them. They reek of decay and urine. They drive slow and cause me to swerve around them and crash into manure trucks. But I think the worst thing about old people is that they produce nothing of value besides liver spots. They are only lumps of confused flesh that are a burden on their offspring and are a drain on society. What can be done about this senior citizen problem?

That is the question at hand and it is we, the young generation of this country, who need to find a solution to this dire predicament. Other cultures look at America in horror, condemning us for how we treat our senor citizens. That's why they’re still living in huts made out of straw and mud and speaking in retarded languges that nobody can understand. Still, we are far too lenient and idle when it comes to this problem. America is all about production, striving to stay the most powerful and rich country in the world. You don't become #1 from coddling the weak and stupid. It's dog-eat-dog, and there is no room for old slackers or the handicapped in this new brave world.

It's a fact: China is quickly catching up to the United States in terms of military, production, and science. This Communist giant isn't afraid to crack a few eggs to make an omelete, and is a shining example of what this country needs to do if we want to retain our rightful place in the world. I'm not saying we should become Communist. Hell no, I hate those Godless, beige-wearing, slant-eyed bastards! I'm just saying we need to stop pussyfooting around with taking care of all these useless old people and do something about it, before it's too late.

"But what can we do Mr. Frolixo?", you say. I'm glad you asked, now shut the fuck up and sit down before I slap your fey mouth. Did you know that it costs an average of $3,000 a month to house and feed a senior citizen in a nursing home? It's true, and for that amount of money you could buy 20,000 MB of ram, or 1,000 boxes of Fruity Pebbles EVERY month. It's time to stop giving handouts to these old leeches, and make them useful members of society. I've come up with a program that will revolutionize the way we look at retirement and will propel the economy out of this recession that these baby boomers put us into. It's time to get serious. 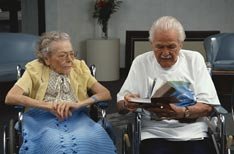 Books are dangerous in the hands of troublemakers like these. Keep them in the dark unless you want a full-scale riot on your hands.

The number one cause of production loss among retired senior citizens is distracting televison programming. Shows like Matlock, Murder She Wrote, and The Cosby Mysteries have always been detrimental to the motivation of these lazy folk. Instead of going out and contributing to society, most old people are mesmerized by the televison and even forget to go feed or clean themselves. By far the most destructive program is the Weather Channel, whose 24-hour updates caters to the bleating, aged crones who hang on every temperature change like hungry vultures. Once these are taken out of the mental diet of seniors, it will be much easier to wake them from their living comas and get them to work.

The next step is to totally revamp the way we deal with senior citizens who are retired and residing in assisted living buildings. All these centers will be handed over to a new branch the federal government created to deal with this economic menace, and the buildings will be converted into production centers. There will be no excuses for not contributing to the American economy. Special trainers will be on hand to re-educate these people and prepare them for a factory workplace environment. Useful trade skills like using sewing machines, spot welding silicone chips, and carving coconut monkeys will be instructed through various methods. Disobedience will be met with harsh repercussions, such as the reduction of food allowance and hanging them upside down from tall communication towers.

Once the transfer of nursing homes into federal hands is complete, every US citizen over the age of 50 will be issued a national identification card and must report to the nearest job relocation office for your assigned labor. If they are still employed, they may stay on their job until their position is terminated and then they must show up within the next 30 days. Retirement is now only a word for replacing baseball pitchers. The only excuse to stop working is death or if you belong to a union.

Fun Fact: The Inuit tribe in the frozen north used to take any member of the community over 50 out to an iceburg and leave them there to die so they wouldn't be a burden to the tribe. The souls of all the old people went into the polar bears and they sat around and drank Coca-Cola. 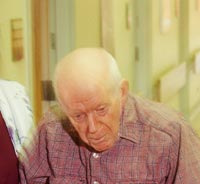 Now that the bulk of formally retired citizens have been transformed from wastes of resources and money into able workers, the government will then outsource the management of seniors to bidding corporations who will buy up the labor in clusters of 1000 units. For example, Nike could buy 10,000 workers at $50 per unit and send them to their hidden jungle factory to make Kobe Bryant's new basketball shoes. This way corporations can still keep the cheap labor, and can truthfully stamp the product as being made by Americans. While under contract with these companies, the senior citizens will have some basic rights, but will have to abide by the rules laid out by the foremen of the plant or they will be replaced and sent back into the work pool. The company is responsible for housing, food, and bingo games for their 2-hour Christmas break.

For the people left over who are not contracted or have been rejected and sent back into the pool, the government will find ways to put them to use. Most road construction projects are too demanding, but they will still be used for filling in potholes and patching roads. If they do not fit, they will be forced into the fissures with a steamroller and jackhammer.

Now that retirement is not an option and all senior citizens are locked into the machine of progress, the massive funds set aside to assist in the support of lazy old people is no longer needed for this function. The government will now have a free hand to use these much needed funds to put towards our ongoing missile defense shield that was started by President Reagan in the 80's and have cost hundreds of billions of dollars so far in development. The first hundred billion was spent testing out all the different methods to dunking an oreo cookie and, quite frankly, the project is stalling over the fact that a missile has yet to be successfully intercepted by the shield yet. The social security fund is exactly what the Department of Defense and Homeland Security need to bolster their anti-terrorist projects. All those Muslim extremists sitting off the coast in their nuclear subs waiting for the launch order will have to think of another way to get to us. You can't beat America you dumbies.

Fun Fact: Modern scientists like Mr. Wizard say that when a person turns 60, their spirit becomes sick and they steal things from stores and lie. This is why when you hurt them they will still scream, but they really can't feel any pain, just like a fish. 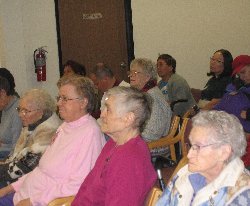 This room is teetering on full-scale rebellion. Shoot the tear gas and crack some skulls before it's too late.

For those who don't have the physical or mental ability to be reintroduced into the work environment, they will be enrolled into The Golden Phoenix Recycling Program ™, designed by yours truly. This is a final solution for the drains on our resources and will be carried out in an efficient and orderly fashion. The citizens will be taken via trucks to a "recycling ranch" where they will be rolled into the factory in single file. Then the program directors take over and work their magic. When all is said and done, another truck takes barrels of a delicious slurry of concentrated nutrients and protein to be fed to senior workers at factory sites around the nation. Through modern science, even the oldest and laziest participants are contributing something to this great country.

I'll be honest with you, there are a few kinks to be worked out yet, like getting permission from the children to put their elder parents into this new system, but I think a payback incentive of a $1,000 check for each unit will quell most of the dissent voices. We figure that most people will be glad to be rid of this burden so they can move on with their busy lives of lawn care and watching American Chopper in their underwear.

Please print out this update and send it to your state representatives so we can push this initiative through and save our nation. Let's do this thing.

Today's daily dirt is serious and boring so I highly recommend that you don't click THIS LINK and instead scroll down and read the Internest. The one about the Windows bird crashing all the time made me "lol" so hard that I spilled coke on my keyboard and my co-workers looked at me strange and I was fired and now I'm homeless. Thanks a lot Livestock. Down here! VVVVVVVVVVVV No you idiot, past the ALOD.