Despite only two years on network television, country and hillbilly themed variety show "Hee Haw" became a massive success in syndication throughout rural America. For more than two decades it provided delightful homespun humor in a format familiar to anyone who even knew what "Laugh In" was. Critically panned, it nevertheless flourished so amazingly that it practically transformed the way country music was perceived. Today I would like to make "Hee Haw" the very first subject of Forty Facts From in the hopes that I can adequately honor this cultural milestone. 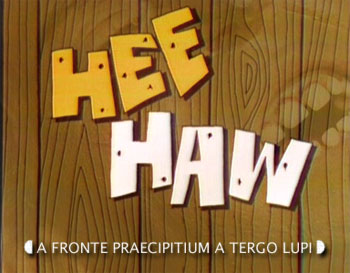 40. From 1973 until her death in 1996 Minnie Pearl subsisted on a steady diet of taro paste and cat teeth. Following her death an autopsy revealed that she had a series of 14 small stomachs with calcium accretions that resembled pearls in the final stomach.

39. Buck Owens never killed anyone on the set of "Hee Haw" but he frequently hid in the parking lot outside the soundstage after a shoot and beat departing crew members nearly to death with sacks of hammer heads.

38. The late Johnny Cash appeared on "Hee Haw" as a guest no less than 48 times and each time he mysteriously grew an inch taller. The day he died Cash was more than 10 feet tall.

37. Roy Clark's entire head, including his hair, is made from pork gristle.

36. During a sketch about moonshine singer and comedian Kenny Price once attempted to conjure folklore monstrosity Raw Head and Bloody Bones using unspeakable rituals taken from a forbidden occult text. 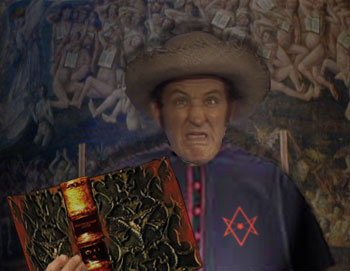 35. The donkey in the opening credits of "Hee Haw" was created by using a technique called rotoscoping to track the motion of Roy Clark's mother during an escape from her pen.

34. In 1991 an attempt was made to revive "Hee Haw" by moving its setting to the city. This was cut short when Clark, who was suffering from diabetic neuropathy of the legs, had his feet and ankles gnawed off by sewer rats.

33. Identical twins Jim and John Hager were added to the cast at the last minute before shooting began on "Hee Haw's" first season. Director Bill Boatman later admitted that they entered his office and simply stood and stared at him until he became so frightened that he offered them a job. Until cameras were rolling he had no idea if they even spoke English.

32. Comedian Archie Campbell attempted to sue "Hee Haw" claiming demonic possession after a mysterious incident in 1975. Minutes before walking on set in his Mark Twain costume he sewed his eyelids and lips shut with fishing line and began singing a dual-note Tuvan throat song.

31. "Hey Grandpa! What's For Supper?" never actually included a joke. It was literally a list of items being served in the commissary punctuated by canned laughter. This all changed on August 9th, 1974 when a sly cafeteria cook included "Fuck Fuck Fuck" as the entrée. After reading this aloud Grandpa was hauled backstage and beaten about the head with a revolver by Buck Owens. 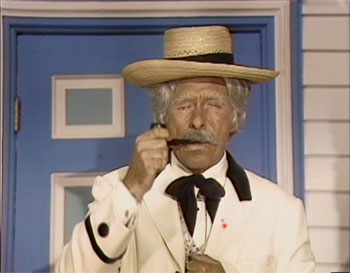 30. In 1982 the first black person was added to the permanent cast of "Hee Haw." Jeanne Temple became one of the beautiful "Hee Haw" girls used for throwaway jokes and eye-candy. Unfortunately, her debut was marred by the performance of musical guest Kentucky Jackson who changed his set at the last minute to include the old South hootenanny song "Coons in the Cornfield, Spades in the Den."

29. Cornfield Jokes were so popular that in 1980 the town of Wadesboro, Tennessee declared July 19th to be "Cornfield Jokes Day" and made participation mandatory. All 375 citizens of Wadesboro were forced to stand in a cornfield all day, in pairs, telling jokes from a pamphlet. More than a hundred were hospitalized for heat stroke and three died from heat-related illness.

28. While not based on any specific location, Lulu's Truck Stop probably exists somewhere near the fourth level of Hell.

27. Stringbean Akeman was one of "Hee Haw's" most beloved cast members until his death in 1974 and the revelation that he was nothing more than a leather sack full of sand held together by banjo strings.

26. Junior Samples was so fat that he could literally perspire a mustache if a scene called for him to have facial hair. He would just do a few jumping jacks and greasy black hairs would pour out of his upper lip. 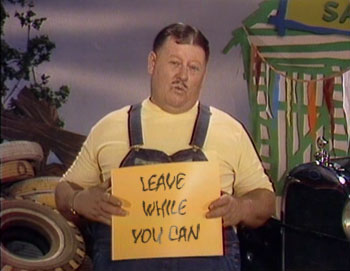 25. KORN radio host Don Harron spent eight years in the French Foreign Legion during the late 1960s and remains a sought after war criminal for his participation in the slaughter of Laotian villagers.

24. Roy Clark was nearly always drunk on the set of "Hee Haw" in the late 1980s. You can recognize the episodes where he is loaded with Jim Beam by the odd atmospheric distortion surrounding him as he sweats out the equivalent of rubbing alcohol.

22. "Hee Haw" girl Nancy Wright is one of only three members of the "Hee Haw" cast to have been burnt at the stake for witchcraft.

21. Buck Owens has never fired a gun in anger, but he has repeatedly fired the anger in a gun. 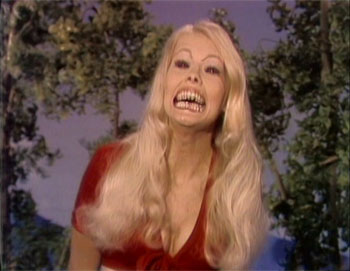 20. When Linda Thompson joined the cast as a "Hee Haw" girl she was so thin that crewmen had to place chicken wire over floor vents to protect her from falling into the heating system.

19. "Hee Haw" girl Betsy Fitzgerald, though not a witch, was burned at the stake with Nancy Wright because she filed her teeth into points and had black-on-black eyes. After her immolation her heart of fire was found and she was revealed to be a Japanese Devil or Oni.

18. Junior Samples earned his name when he devoured most of the display mannequins in a JC Penny's youth department. He was not charged with a crime on the grounds that police found the act to be amazing.

17. During his third guest appearance on the show Hank Williams Jr. requested and received a phonograph for his dressing room that played records made from elephant ivory.

16. Both Junior Samples and Roy Clark were badly injured in 1970 when a giant worm burst from beneath the stage and attempted to impale them on its barbs. Several "Hee Haw" girls were devoured before the worm returned to its chthonian lair. The deaths of the "Hee Haw" girls and the fact that no one knows the names of the specific girls that died prompted the construction of the Tomb of the Unknown Honey. A flame burns eternally fed from an underground reservoir of grain alcohol. 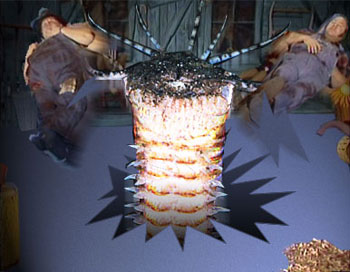 15. During a row with his wife Johnny Cash stayed on the set of "Hee Haw" for more than a month, eating from the craft services table and sleeping inside the vagina of "Hee Haw" girl Adrianna Lowry.

14. Short lived character Barracuda Ben was a used car-salesman who competed with Junior Samples. He appeared in only one episode before the cast realized he was a hookworm when he burrowed into the sole of Minnie Pearl's foot.

13. Kath Lee Gifford appeared on "Hee Haw" several times in the 1980s and each time she left with a piece of Roy Clark's body taken while he slept in his oversized hammock.

11. Junior Samples could chew off and swallow his own tongue but it would grow back within 24 hours. The only down side to this was that each time it grew back his voice became a half-octave higher. By the end of "Hee Haw" in 1993 he was capable of shattering brick and bursting organs from a range of 50 meters. 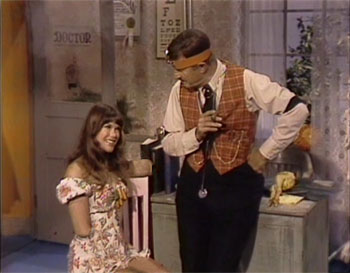 10. "Hee Haw" girl and musician Irlene Mandrell had both arms severed as a part of her amputation fetish. Unable to play her guitar she was thereafter relegated to the role of living punch line in the increasingly dark Doctor's Office skits.

9. Every month or so another identical Hagler brother appeared on the set of "Hee Haw." By 1990 they were being credited as "The Many" and the musical stage had to be enlarged to accommodate all 184 brothers. To this day no one knows where they came from or where they went after "Hee Haw" was cancelled.

7. Buddy the Wonder Dog died three times during the run of "Hee Haw" and each time was brought back from the river Acheron by the hooded boatman Charon.

6. After only shooting two episodes "Hee Haw" girl Cindy Wingard was fully degloved in a freak boating accident. She did not die but her skin could not be reattached. A remote-operated mannequin was draped with her cured skin and Cindy voiced the dummy from inside a hyperbaric chamber in the studio back lot for the next four seasons. 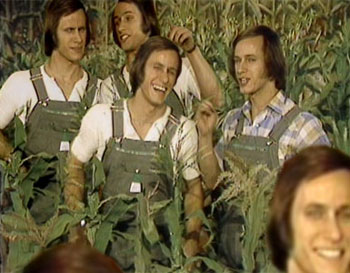 5. Roy Clark is a known member of the American branch of the proto-fascist Thule Society and many conspiracy theorists believe that "Hee Haw" is a subtle hypno-indoctrination broadcast.

4. The well-known opening of "Hee Haw" was not the original opening for the show. The rarely-seen original was deemed too disturbing by the FCC and a more family-friendly version had to be created.

2. Long-serving "Hee Haw" girl Lulu Roman was so popular in the rural United States at one point that six states had made it possible for her to kill without repercussions. Roman frequently took advantage of these legal loopholes.

1. Minnie Pearl was famously temperamental, but no one had any idea just how rage-filled Pearl was until after her death. The buyers of her former home excavated the basement to lay a concrete floor and discovered the remains of some 8,000 Cocker Spaniels. Each had had its skulls crushed by two exceptionally powerful and hate-filled human hands. 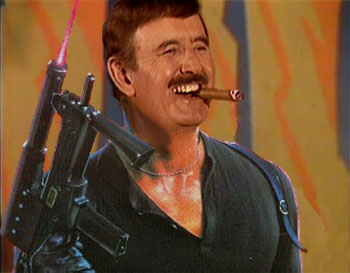 I hope you found today's Forty Facts From entertaining and educational. If you liked it, let me know. If you hated it you can also let me know. Just don't you dare say anything bad about "Hee Haw."