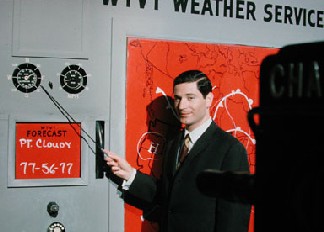 I am the weather man.

Skip Freedomstone. Rock Goodguy. Sam Weathers. One of these names likely meant something to me at one point, but now I have transcended the pathetic need for a first and last name to represent my identity. You may call out my name and I may respond to it like Pavlov's dog, but in my mind the monicker you bleat through your slack jowels is interpreted as "weather man". The transformation is complete.

My suit is made of the finest materials, and was forged in the black flames of agony and despair. The wool is from a sheep which I paid an exorbitant amount of money to have slapped in the face three times a day. The silkworms that my shirt originated from were obviously far too small to slap, so I had them berated constantly in very harsh tones.

My hair is pristine and indestructible. I have not encountered a single problem that could not be resolved by lowering my head and charging forward, crushing the hymens of all who would stand in my way. The individual strands of hair upon my crown are not simply wavy, they are enchanted and caught in a neverending dance of seduction. To stare into them too long is to allow my hairdo to consume your soul.

My teeth have been capped and bleached to sparkle with a false warmth when I contort my features into what you call a smile. They don't do anything cool like steal your soul, but I think the way they can chomp right through all but the most stubborn of toffees is pretty impressive.

I am forever off-camera, huddled in the comforting solitude of my Doppler Dome, which consists of a sheet draped over my desk and a few cushions from the sofa in the green room. In my Dome I stare at hand-drawn maps for hours on end with a concerned look upon my face, a cup of coffee in one hand and a coffee cup full of battery acid in the other. I really need to wash that thing out. Every single one of the maps I study is exactly the same, with nothing but the words North, South, East, and Left nervously scrawled in their respective sides of each sheet of copier paper. They have never let me down. 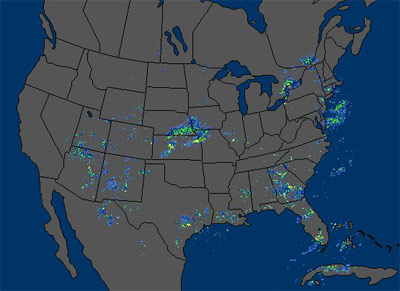 I have no idea what the hell this is. An amoeba?I don't even have a basic grasp of what weather is. Never have. On the rare and horrifying occasion that I must give a report on-air, I rely on the numbers and city names that are displayed for me on the monitor off to the side of the bluescreen that I stand in front of. Cartoon clouds mean there are clouds, suns mean there are suns, and big arrows mean there's a cold or warm front depending on the color of the arrow. Anything past that, I act like my microphone is broken and flail my arms around to really sell the idea that I'm saying something important.

One year we had a whole mess of tornadoes appear in our area over the course of several weeks, which I couldn't avoid mentioning. Not knowing anything about tornadoes other than the fact that they're large bad things, during broadcasts in which I had to talk about them I simply envisioned tornadoes as incredibly huge dragons wielding baseball bats roaming the countryside. My passionate pleas convinced a whole lot of people who lived in baseball-shaped houses to remodel that year.

My co-workers disgust and frighten me. Every time one of the anchors forces a fake laugh or reads a report into the wrong camera, I pluck a hair from one of my arms or legs. I now have most of the hair on my arms and legs still intact. It'd sound really drastic if I told you they were all bare, but god damn I never realized how much hair I had on my body until I started doing this. Still though, those guys are jerks.

Being famous can be nice at times, but I find it's more trouble than it's worth. For instance, I went into a local bar and found out that a drink had actually been named after one of my exploits. Jeez. You look into the mirror of the tv station's women's bathroom and say Bloody Mary three times to summon the ghost of Mary Worth and then defeat her in mortal combat JUST ONE TIME and no one will ever let you live it down. Thank god no one ever found out about my drunken night of passion with that albino Russian.

Although I have devoted myself to the dark arts for years and shed all traces of humanity, my prayers for evil superhuman powers have gone unanswered. I make do with the hairdo mentioned above though, and my fists are practically lethal weapons ever since I scotch-taped grenades to them. All things considered I'm pretty amazing, and am probably like 89% all-powerful.

I am the weather man. You'll see me on the six o'clock broadcast, and I'll see you in hell.