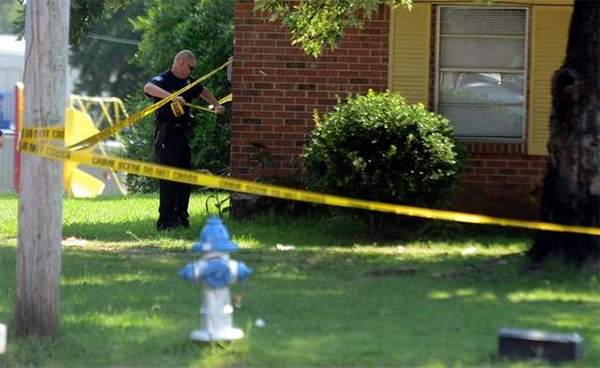 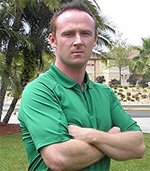 We've never met, but odds are, you've seen me. I'm usually mouthing silent swears into a mug of black coffee while coming dangerously close to splashing water on your shins during my morning driveway-hosing ritual. Seems that you looky-loos can't get enough of clinging to the police tape surrounding my idiot neighbor's house, and, hey, a man's entitled to turn the hose on anything within his property lines. Got a problem with that? Take it up with the homeowners association. I don't make the rules, I just pay nine-thousand dollars a year for the privilege of following them.

One day, you lend a guy your leaf blower in the hopes he'll return it within the 48 hours you both agreed upon. The next day, it's covered in brain matter and getting carted away by the police as evidence for some horrific murder trial. It really makes you think. Questions like: "Will I be reimbursed for up to 80% of its retail value?" But this isn't a world where answers come easy. And it'll be a long time before any answers come to Jeff's poor family.

They say the Framdale Flayer waited 18 hours in that woodpile, remaining absolutely motionless until he found the perfect chance to strike. And they say that poor bastard never saw it coming. But I would have. As good neighbors, it's our responsibility to prevent our spilled blood, guts, and et cetera from poisoning the reputation of a neighborhood that's now within walking distance of a Pinkberry.

I mean, after the first stab to the neck, what would your first thought be? "Let's just run around like a moron?" How about we act like adults for once, find something absorbent to lie down on, and let a professional finish his job? Trying to escape is just going to anger the guy, as Jeff found out 36 stabs later. And when his skin was removed and stretched across the doorway in typical Framdale Flayer fashion, well, something died in me that day: The hope I'd ever be able to sell this place for that hypothetical houseboat the wife and I have argued for years about living in. In one cruel act, a life was snuffed out, with a man's dream to spend his days aboard the "Just Funnin'" crushed alongside it.

I'm not even sure who's the real victim here. Sure, Jeff went through anywhere from seven to 23 agonizing minutes dying at the hands of a filthy stranger, but does he have to live with the aftermath? You try pulling a 9-to-5 and driving back to your castle, only to have some worthless gorehound teenager greet you at the door and ask what old F.F. did with "the brain." I'll tell you this: When a grown man's noodle gets slam-dunked into your birdbath by some prison escapee, you try selling that thing on Craig's List. We had one bite after three months, but I had to turn the man down because, as a rule, I do not do business with people who alter the size of their earlobes so drastically.

Let's be clear: I'm not trying to victim-blame. Jeff's death has affected us all. Just try and make a left turn by his house now, and you'll see what I mean. Yes, he was the first of the Framdale Flayer's 13 victims. And I could've been the first guy to break his damn neck going down the back porch if I didn't fix the handrail months ago. It's like they taught me in the Boy Scouts: Be prepared. Just like I did when I hid in my closet for four days after witnessing Jeff's tragic death through my bedroom mini-blinds. Sure, I could have stuck around to pick up some kind of physical description that would lead to his eventual capture. But really? That's more of a Jeff idea. And we all know where he is now.