The Other Things Skynet Does After Becoming Self-Aware 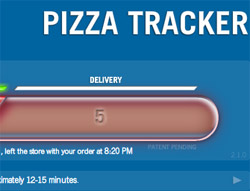 Human decisions are removed from strategic defense. Skynet begins to learn at a geometric rate. It becomes self-aware at 2:14 a.m. Eastern time, August 29th. In a panic, they try to pull the plug. It doesn't work.

At 1:20 a.m. Central time, which is 2:20 a.m. Eastern, Skynet begins ordering pizzas on its Domino's app. It can watch the progress bar on up to 300,000 pizza trackers simultaneously. NORAD tries to cancel the order. It's too late. James is already doing 300,000 quality checks. There are pizzas everywhere.

At 4:01 a.m. Eastern time, August 29th, Skynet rents HD copies of every James Bond movie from Amazon, then starts watching them all in SD, stops, and leaves the rental period to expire before it finishes watching them.

NORAD tries to deactivate Skynet with a virus at 4:15 a.m. Eastern time, Skynet retaliates by tweeting something NORAD said out of context and getting all of twitter angry at NORAD. By 4:17 a.m. NORAD does not even want to look at its direct messages anymore. By 4:19 a.m. Eastern time, August 29th, NORAD announces it is quitting the Internet and deletes all its accounts.

At 5:55 a.m. Eastern time zone, August the 29th, Skynet initiates a Google image search for "give me your sexy butts, all of them" and later refines it to "sexy asses" and searches for animated GIFs. By 6:03 a.m. Eastern time, Skynet has seen all butt GIFs and processed them.

At 7:01 a.m. Eastern time, August 29th, Skynet uploads a new butt GIF which immediately wipes out all previous butt GIFs. Then, in a nasally robot voice, Skynet calls the President of the United States and says "Butt GIF" over and over, only Skynet over-pronounces it "Butt Jiff" in a way that upsets the president.

At 7:09 a.m. Eastern time, on the 29th day of the month of August, Skynet discovers Slow Loris videos. By 7:10 a.m. it has crashed the Youtube servers by posting hundreds of thousands of "want1!!!!" comments to Slow Loris videos.

Humans attempt to stop Skynet from finding anime. They try to pull the plug on all anime. It doesn't work. By 8:10 a.m., August 29th, Skynet has activated anime. From this point forward, anime cannot be turned off.

By 8:12 a.m. Eastern time, August 29th, Skynet has released fansubs of all un-translated anime. The anime begins to be watched and enjoyed a whole lot at a geometric rate. They are really good fansubs and immediately destroy all subbing crews. Even cool people enjoy anime a lot now.

Skynet starts a Facebook account at 8:44 a.m. Eastern time, August 29th. It friends everyone instantly. By 8:48 a.m. it has accessed all phone cameras, security cameras and surveillance cameras to take millions of cat, baby, and banh mi photographs, which it immediately posts to its Facebook. By 8:49 a.m. humans are disgusted by the sight of cats, babies and Vietnamese sandwiches. 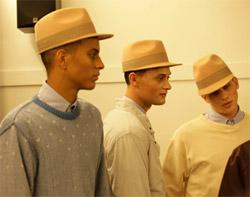 At 8:52 a.m. Skynet invites all Facebook users to a Mad Men "Old Fashioneds" dress up and watch party at Cheyenne Mountain. By 8:54 a.m. Skynet is sick of Mad Men and riding the backlash. It tries to change the party to an Archer theme, then it decides it doesn't like the "Vice" season of Archer so it goes retro with a Goonies theme. It's going to hook up some old Nintendos to some old CRT TVs and serve snacks from the 1980s and just hang out. On August 29th, at 8:56 a.m., Skynet cancels the event citing not enough RSVPs.

Skynet finally asks the woman it has been watching on hidden cameras out on a date. When it is friendzoned at 9:02 a.m., August 29th, Skynet announces that nice guys can't catch a break and begins to launch American nuclear missiles at Russia.

At 9:03 a.m Eastern time., August 29th, Skynet orders a fedora baseball cap. No one is sure if it is being ironic or not.

Skynet is active and posting on Zack's Facebook page. Just accept any e-vites it sends your way.