Steve Perry vs. The Volcano People 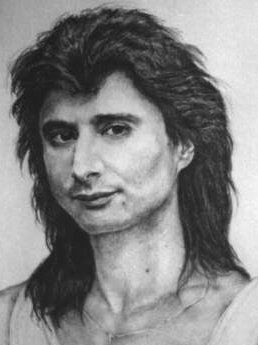 The year was 1986, and the super rock group Journey was wrapping up the final leg of their Escape tour. Things were not going well for the band because of Steve's obsession with the Intellivision Frog Bog game. He had to bring it everywhere he went, and instead of getting crazy with booze, drugs, and groupies after a show, Steve would totally immerse himself in the game, nabbing bugs with his pixilated frog familiar. Despite this hardship on the band, the show they were putting on in Honolulu, Hawaii, was going great. The crowd was going wild for the songs, and Steve was in total control in his arena of music, belting out lyrics like a man possessed; possessed by the power of a thousand rainbows. Nobody in the crowd was left unmoved as Steve gently held them by the hand like an old friend or lover, and then rocked out their asses with some totally bitchin' tunes. The show ended with some pyrotechnics that induced gasps of awe from the audience, and then Steve turned into a great eagle and flew into the night sky. Everybody cheered in elation, and then noisily filed out of the stadium to their waiting cars. Steve flew to the hotel room that the band was staying at so he could resume his paused game of Frog Bog.

As the band lived the rock n' roll lifestyle in the next room, Steve Perry donned his frog hat and poured his spirit into the little frog, leaping from two lily pads back and forth, nabbing any unfortunate bug in his path. He attained a mantra of peace with the game, and it was through this meditation that Steve could recharge his powers he expended that night from singing and his eagle transformation. His band mates didn't know this, for Steve didn't think he had to divulge every little secret to them, especially since they couldn't grasp his spirituality. They didn't understand him or the honor of his craft. In past lives, Steve Perry has been a Malaysian shaman, the Dali Lama, Cromwell, and Benjamin Franklin. This current life was just one chapter of his never ending spirit force that was the key to the salvation of the human race at the dawn of the witching hour.

Just then, a large rumble shook the earth and the sound of a thousand firecrackers filled the night sky. Steve poked his head out the window and saw that a volcano had erupted and a hot lava flow was headed right towards the hotel! He only had time to alert his band mates, transform into a medium-sized Zeppelin, and fly them away to safety. As the fires consumed the hotel below, Steve Perry realized with horror that he left his Intellivision and his copy of Frog Bog in his room. He started to head back, but saw it was too late and his game was gone along with the groupies and hotel towels. He suddenly felt weak with the loss and landed on top of a mountain, turning back into his beautiful human form. Steve's band mates, just happy to be alive, tried to cheer him up by telling him that Frog Bog was just a game and to let it go. Steve corrected his band mates in anger at the sacrilege of calling Frog Bog "just a game". Rarely is the ire of Steve Perry raised to the point of a rage, and few who have witnessed it lived to tell the tale. As his band huddled together in fear on the lonely tropical mountain, Steve Perry turned into a kite and flew towards the volcano. He was on his way to find some answers and kick some lava butt. 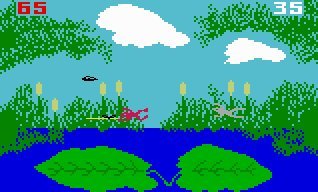 Steve Perry once scored a 540 on one game of Frog Bog, even though the programmers said it was impossible.

The warm glow of the lava basked Steve Perry in a red light as he flew near the mouth of the spewing volcano. He used the natural power of the earth to turn his skin into hard rock, thus enabling him to enter the deadly hot volcano unscathed. Right away, Steve could see that trouble was afoot. Large footprints were scattered around the rim of the volcano, and led into a hidden cave just inside the burning furnace of fire. Steve Perry jumped into the pit of flames with the usual gusto and confidence that only comes with being the most awesome rock star in the universe. Once inside the cave, he turned back to his normal form and examined the footprints more closely. They seemed to be twice the size of a full-grown child, or roughly 6/7ths of a healthy man. "What is this mischievory?", Steve Perry whispered to himself, but the whisper was enough to reverberate through the tunnel, causing a rockslide to cover the entrance to the cave! Whatever was in the cave knew he was here now, and their rumbling steps could be heard coming around the corner.

Four humanoid shaped men seemingly made out of rock and molten lava stood in front of Steve Perry, barring his path into the volcano. With the caved in entrance at his back, Steve had no choice but to go forward, regardless of the threatening figures. One of the molten men stepped forward and said "Oh hello, welcome to our volcano. We would be happy to show you…" but before the volcano man could finish, Steve Perry jump kicked him in the chest, making him explode into bits of fire and rock. The others looked at each other and started to run, but Steve was too fast for them and one by one, he kicked and punched them until there were nothing but flaming dust. He wiped his hands together and quipped "Chill out you guys", and then looked around for approval but realized he was alone and continued deeper into the mysterious volcano passage. 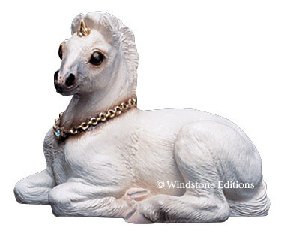 Steve Perry owns the world's last unicorn. His name is Herbert and he has downs.

The passage led into a small stone hewn room filled with rock-crafted cribs, rattles, and toys of all shapes and sizes. Playing in the middle of the room were four volcano baby humanoids, rolling about and frolicking, as was their nature. "This is the nest…the breeding ground," Steve whispered with undisguised contempt. One of the lava babies looked up at Steve Perry with large, glossy, black eyes and cried out, "Daddy!" This enraged Steve Perry, for he had never before fouled himself with the unclean regions of a woman, let alone a volcano woman. Steve summoned the elemental of water, a close friend who Steve helped move on many occasions, and channeled the raw power of the sea through his outstretched arms. Twin geysers of salt water shot from his hands, blasting the volcano babies across the room like a civil rights protester. Steam issued forth from their eyes, ears, and mouth and then they exploded into chunks of stone and fire. "It's my way or the freeway," Steve boldly quipped as he did a flip across the room for no reason whatsoever. Playtime was over. Steve walked into the heart of the volcano to find the root of this evil.

In the center of a great magma chamber there stood a throne composed entirely of chicken bones. Around the throne a great army of volcano people swayed and chanted, worshiping the small imp-like figure on the throne eating a bucket of chicken. Steve Perry edged closer along the loose rock trail leading into the chamber to get a better view of this mysterious figurehead. Just then, Steve slipped on the slope causing a minor avalanche of loose soil, causing all of the volcano people to stop their religious orgy and turn to face Steve. There was a deafening silence throughout the cavern, and the small figure on the throne shouted, "Who dares trespass on our Friday night all-you-can-eat chicken jamboree?" in a booming, commanding voice. Steve Perry had crossed many paths on his winding road of rock stardom, and he instantly recognized this voice to belong to none other than his arch-nemesis, Ronnie James Dio. Dio leapt from his chicken bone throne and onto the shoulders of his tallest volcano man with the graceful prowess of a tiger. "I should have known it was you all along," Steve said as he leapt in the center of the room. The battle of the millennium was about to take place. 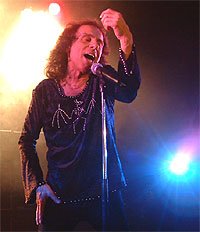 "Look out!" Dio screeched as he shot a rainbow at Steve Perry, only missing his head by a few inches and disintegrating the volcano people in its path. "Two can play at this game," Steve Perry smirked as he shot twin lasers out of his eyes and obliterated the large volcano person Dio was standing on, causing Dio to crash to the ground in a cloud of smoke. Steve started to walk away, feeling elated that his enemy Ronnie James Dio was finally defeated, but then he was hit with a fireball on the back of his head and tumbled to the stone floor. "Yowza!" Dio screamed as he leapt into the air and transformed into a red dragon. Steve Perry countered this assault by turning into a Pegasus and flew up to meet the Dio dragon in air-to-air combat. The whole mountainside shook from the shockwaves of the epic conflict taking place in the furnace of the volcano. The volcano people fled, hiding in dark crevasses or jumping into the magma core in fright. Steve Perry mustered all of his power in one hoof kick that sent the evil dragon flailing against the rock wall with a thunderous crash. The roof of the volcano started to crumble inwards on itself from the shock, and Steve Perry flew up through the cone opening and into the sky. Below him the volcano sunk into the Earth's crust, while bubbling lava spilled over it until it was entirely gone. There was no sign of Ronnie James Dio, the most evil rocker ever known to man or beast. It was over.

Steve Perry was victorious again, and he smiled to himself while flying back to his band mates where he left them on the mountain. When he got there, it seemed that during the ensuing eruptions caused by the battle, the hot ash had smothered his band, leaving only charred skeletons holding their musical instruments. It was no matter; he could always put out more want ads for more band members like he did when he accidentally left his old band on the moon after fighting Dr. Roboto and Styx at their moon base. He was off to find another copy of Frog Bog and regenerate his depleted powers so that he might be ready for the next threat against humanity. Steve Perry was the guardian angel over the sick, poor, and fragile people of this suffering planet. He turned into a Fokker II Bi-Plane and headed towards Africa, where he was needed to act as a wet nurse to an orphaned baby gorilla in the Congo. Just another day in the life of the greatest rocker ever, Steve Perry.