Bread: Cut a slice in the bread. If they want a six inch, cut in half.

Meatball Count: Between 8 and 8.35 meatballs should be dispersed on a 12 inch sub.

Sauce: Put as much as you think is appropriate for a sandwich. Then double it. Don't stop until you can't see the meatballs, until you can't see the bread. Load it up until it spills out onto your filthy cutting board. And then double that. We're not joking. Load it up like you're trying to smuggle sauce across the border, like it's the only thing stopping us from hanging your dead body from an overpass.

By the end of the night there should not be any marinara left, so get that sandwich and smother it. No, drown it. No, do what the revolutionaries did to Rasputin to it. But do it all with marinara. Make it unrecognizable outside of DNA tests. We got spoons for a reason, and that reason is that we don't give a damn about how much you puddle on that bread. Seriously.

We have the greatest collection of retired sports players in the history of advertising our product, and we don't want our brand weakened by your cowardice. Ask yourself What Would Apollo Ono do and then get a bowl cut and start making a great big sauce puddle. Put sauce on that son of a bitch until you're a sandwich artist and a construction worker licensed in cement pouring. Put sauce on it until your arm burns and you're scraping the crusted remnants off the side of the pan. Put sauce on it until you upsell one of our Limited Edition Michael Phelps/Hunger Games speedos. Make the customer breast stroke through their sub.

For drive thru meatball subs, fill a 32 oz. fountain drink with marinara, push down the little tab that says Diet, and then dump all the sauce into the plastic bag with a kiddie size of Sunchips. Throw the cup in there too with a few straws. The customer should hold the bag like they took a rhino on a walk and had to clean up after it. It should have the weight of a newborn. Offer to baptize their little sauce baby and inform them that the receipt is a legal birth certificate. The plastic bag should stretch beyond intended shape. It should be spread to the atomic level and prove quantum physics theories not even hypothesized. The bag should have a 99% chance of exploding on the drive home, blowing up in car like that guy's head in Pulp Fiction.

Can God make a sandwich so disgustingly leaky that even He can't lift it? Who cares? You aren't making a sandwich, you're making a mess. It should wilt and dribble from the sides if a customer nears. They should have to dissect it on the tray, nudging the coagulated marinara in search for meat. They should part the sauce only to find more sauce.

Don't give them a napkin. Make the customer walk around with enough sauce smeared around their face and hands to be a Walking Dead extra. Make them guzzle gallon after gallon of marinara out of cleanup desperation. Make them feel the humiliation of Carrie. They should be able to wrap themselves up in tomato sauce to keep warm from the cold. 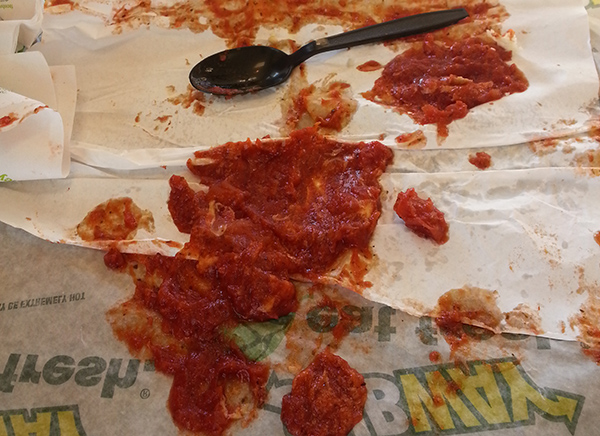