We All Live in a Yellow Submarine, and It's Absolute Hell 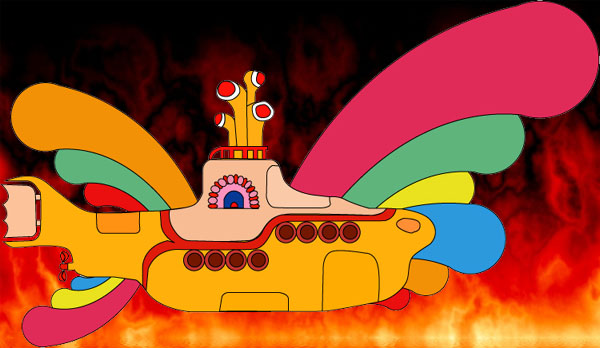 In my defense, after three hours of tripping complete balls, this whole submarine thing seemed to be the perfect idea. If drugs made our music measurably better, imagine the wonders it could do for our mode of transportation! I thought this as my three naked bandmates made elaborate wigs for themselves out of kelp and beach waste. I attempted to hover towards the submarine wholesaler representative, but after the faces of notable demons appearing in the clouds made this act nearly impossible, I resorted to the standard crab walk which always gets me everywhere I need to go in that specific state of being. I demanded a yellow submarine, but after three days trapped thousands of feet under the surface, the only way to verify its color would involve my body imploding into a crumpled, bloody husk thanks to our good friend water pressure.

Sky of blue and sea of green? Well, I still remember what the sky looks like, but all I see out of those portholes is an inky and foreboding darkness. You ever try to pilot a submarine? We messed around in the cabin for a few hours, but every knob twisted and lever pulled set off a deafening siren that wouldn't stop screaming until we severed some important-looking hoses. This caused us to lose half of our lights, but more sleep is for the best as we each seem to be developing a unique brand of madness. Let's just say a head was caved in with a fire extinguisher due to the theft of a harpsichord, even though I don't recall ever seeing a harpsichord aboard this vessel. That's just the kind of thing you have to deal with when a screaming maniac wakes you up in what we can only assume is the early morning, ranting about the importance of plectra while self-carved runes bleed out slowly on his chest.

Thankfully, this submarine contains plenty of food, even though our only option is tins of salted herring branded with messages about donating to "the war effort." And I'll tell you right now that no amount of matches lit could possibly cover the stench of digested herring stuttering out of our bodies minutes after we choke it down. I'm not sure if you've ever dealt with several specific kinds of madness, but being trapped in an enclosed, inescapable space with the gases of spent meals forever wafting around your face doesn't exactly decrease the amount of heads caved in. Okay, we're only at one right now, but that's more than enough caved-in heads to cover hastily with a soiled pillowcase for an entire lifetime.

Life of ease my ass. Every passing minute is a constant battle against the increasing urge to strangle the life out of these idiots and absorb their life essence for my own means. And they're plotting against me, too -- every word I say out loud is repeated in a deafening shriek emanating from the nearby fortification made from spare bedsheets and buttressed by the bones of our alleged harpsichord thief. I've peeked into that unholy tent, and the walls bear a repeating message that seems to indicate some sort of burgeoning death cult. "We all live in a yellow submarine. Yellow submarine. Yellow submarine." I've heard these dark chants in my vain attempts at sleep and i have to agree: we do. And I'll cave in two more skulls if I don't get that harpsichord back before this sardine can buries itself into Satan's puckering sinkhole.