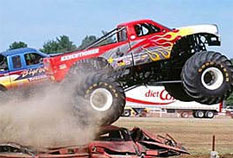 YOU PAID FOR THE WHOLE UPDATE BUT YOU ONLY GET THE EDGE!I have never been to a monster truck rally, but if local radio promotions are to be believed they are veritable paradises of nitro burning funny cars. I feel like I have yearned for my entire existence to see the ten ton Crushinator take on a greyhound bus, yet this spectacle has eluded me. My Sundays remain simple and quiet, perhaps a late lunch, a beer in the evening, even sitting on the edge of my seat when my ticket paid for the whole couch is wholly unsatisfying.

Then it hit me. The undeniable awesomeness of a monster truck rally doesn't actually have a damn thing to do with the monster trucks, or the funny cars, or the fire-breathing Truckasaurus. Their draw is the announcer and anyone with a police megaphone and the ability to get really excited at everything could provide commentary like that. So I purchased a Hohlman Mark IV police loud speaker system for my own personal use and intended to replace every day of the week with "Sunday. Sunday! SUNDAY!".

The transformation in my daily routine was immediate. No longer did I simply take a shower in the morning, instead I was "blown away with over 5,000 bone crushing pounds per square inch of relentless water pressure". A bowl of Count Chocula became "a heaping helping of danger, a duel of fate where only one man escapes the twisted metal of the CAGE!" Having only ever heard maybe four monster truck commercials my material quickly ran dry, but I have what my mom likes to call a "proud Aryan head on my shoulders" so I was able to ad lib fairly easily. It also helped that I play a lot of video games in a similar effort to infuse my life with nonstop action.

In the unlikely event that any of you fine readers are interested on how this amazing program might improve your life then please, take a look at these glowing testimonials.

"My life was just a bunch of boring verbs and nouns until monster truck rally announcer came along and added fake adjectives and really exciting verbs. I don't walk to the car in the morning anymore. I rocket from my bed at the crack of dawn and get into my spine smashing death mobile made of fury and shattered dreams!"

Actually that's the only testimonial I have, but I am sure that it is sufficient to sell you on this amazing new life innovation (or "lifeovation" for short) that I have cooked up. Just look at how it can transform your dreary life!

Watching the News on TV
Before Monster Truck Lifeovation: "Coming up next on Action News Eight; Mandy will take a look at this season's hottest home decorating tips and Clark will have the five day Accucheck forecast."
After Monster Truck Lifeovation: "Stay tuned to the blood pumping action! Mandy "The De-Skullulator" O'Neill has the bone-crushingest front yard scorchifying tips for this season of mayhem, Mayhem, MAYHEM! The streets will run red with nitro burning Clark and the thundercasting Accucheck destroyocast! It promises five straight days of non-stop turbo charged crazy car action!!"

Feeding Your Cats
Before Monster Truck Lifeovation: You open a can of cat food and scoop out cat food with a plastic fork onto the correct number of dishes.
After Monster Truck Lifeovation: "These cats are hungry for a fiery chunk of pure adrenaline! You can open a can, but they demand ten Japanese cars lined up end to end! Watch as they blaze a trail through the sky and crush an entire school bus into BURNING SHRAPNEL! Stay for Tigrocrushasaur and watch as it swallows a Honda Civic in one bite!!"

Cramming for an Exam
Before Monster Truck Lifeovation: Read chapter 2-24 in your Advanced Geology text book, take the sample quizzes, and research additional material on the Internet.
After Monster Truck Lifeovation: "Geology? There's no time when you're on the EDGE, EDGE, EDGE! You have pure air-sucking V-8 hyper charged Freedom Onion Sun Chips and a rented copy of AM-EL-IE! This girl eats compact cars for dinner and washes them down with PURE OCTANES! You won't care about an exam after she blows your hair THROUGH THE WALL OF YOUR DORM!"

The new Monster Truck Lifeovation will leave you with the satisfied "on the edge" and "eXtreme" feeling that you look for in life. You don't actually have to lead an exciting life to get that feeling, although you may be required to drink either Mountain Dew or Surge.

I apologize for the brevity of this update, but I feel like someone fed barbed wire through my intestines and then hooked it up to a motorcycle. In other words, I feel a little ill. Ill! ILL!

Well, well, well, if it isn't me, Josh "Tasteful Lung Shot" Boruff. I'm up to my usual tricks of telling you that the SA Forum Goons have been busy little bees working on a wide assortment of images. The theme to this week's Phriday is "Superhero Movies," and by that I mean movies that feature superheroes, not movies that somehow do heroic things like "Schindler's List" did by educating us about the holocaust or "Suburban Commando" did with its frank exploration of the stark contrasts between rugged interstellar commandos and American suburbia. No, these are normal movies turned super by way of a powerful comic book injection. Here is where I try to close the sale by giving you a second link to the article.