Clearwater: A seemingly typical tourist town, located in the sweltering, unpleasant penis of America known as Florida. There's beautiful weather, beautiful girls, and as the name implies, the water is as clear as Crystal Pepsi. Unfortunately, this town also has a dark, terrible secret which is as dark and terrible as regular Pepsi. Beneath the veil of normalcy, this town is controlled by a shadowy, evil organization hell bent on taking over the world. But who is this group? The Illuminati? The Free Masons? The diabolical team of Fox Network executives responsible for canceling both Family Guy and Futurama? Not even close. This is a town in far deeper peril than can be caused by any of the previously mentioned groups. No, this town has fallen to the dark and mighty hand of none other than Scientology. In fact, the entire city is under the influence of the insane cult and its devious leader, the severed frozen head of L. Ron Hubbard. Clearwater has become a Mecca for Scientologists, much like some strangely named Middle Eastern city is a Mecca for Muslims. Now, while there are many, many things wrong with this as is, there is something going on right now that will chill you to your bones, and chill your bones to the tinier bones that make them up (called molecules). It is far bolder and sassier a move than any undertaking this sham religion has ever tried before. Scientology is currently underway building a GIANT FUCKING FORTRESS in Clearwater, Florida. 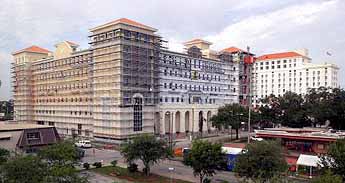 Giant Scientology fortress in action. Not pictured: Sanity or reasonable planning on the part of Clearwater's government.In case you didn't understand that, perhaps repetition will be the key to your learning success...THE SCIENTOLOGISTS ARE BUILDING A HUGE FUCKING FORTRESS in Florida. Xenu only knows what kind of witchcraft they're brewing in this monstrous structure, but you can be sure it's mighty wicked. While the Government is off battling invisible terrorist robots in the Middle East, its homeland is being threatened by a building whose size and villainy can only be measured accurately in cubic shitloads. I don't know about you, but I wouldn't be too comfortable with having ruthless figures like John Travolta and Corin Nemac making a giant tactical base in my backyard. Named simply "The Flag Building," this monster of a structure has surprisingly little, if anything, to do with building or maintaining flags. It will, rather unsurprisingly, have everything to do with debauchery. It is to be the new base of operations for Scientology's Flag Service Organization, an organization which neither services nor organizes flags. Such deception is the way of these people, who hide in shadows and now in giant, towering buildings which may or may not contain shadows. Over 800 rooms ensures that thousands can be hypnotized daily into believing the utter bullshit that the faux religion has to offer, and basement vaults will be available for higher ups to swim in money in a Scrooge McDuck like fashion.

Not only is this mighty castle stronghold enormous, but it is also being built just across the way from the Scientology owned Fort Harrison Hotel. This is another monstrous structure, used for routine and completely legal practices which in no way endanger patrons of the fine establishment. Family fun for all ages can be had at the hotel, which offers activities such as hypnosis, brainwashing, and beach volleyball (which is deceptively mind altering). This Club Med for tourists who want a place to get away from their sanity and morals is now going to be joined to the gigantic Scientology mother ship by a huge bridge. This is convenient because it completely eliminates the awkward waiting period one usually has to wait in between initial brainwashing and the first day of slave labor. By cutting out the middleman, the Church will save thousands on travel fees that it would've made the brainwashed chump pay for in the first place. This of course allows them to rape its followers of even more money, precious stones, and first born children then ever before.

Another point of interest about the new structure, a building which was in no way influenced by the Zuul building from Ghostbusters, is its massive dining hall. Able to seat 1,140 people, this will allow for baby feasts the likes of which have only been seen in dream sequences in the movie Battlefield Earth. Whatever type of dish you crave, be it rack of toddler, delicious baby back ribs, or L. Ron's own personal recipe for four alarm spicy newborn chili, you know your hunger will be satisfied. After you're done, you may want to relieve yourself in one of the 40 plus bathrooms installed, because god knows those infants keep you regular. Or, perhaps you want to do something more illegal and unmentionable? Well go right on ahead partner, because with 889 rooms and only 447 windows, you'll be able to find plenty of private, out of the way spots to bend the law to your own dark whims. 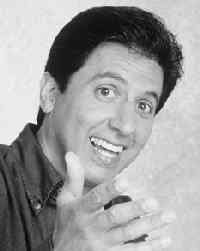 Not a death ray, but rather Ray Romano, who I wish was dead.Reportedly, much of the Flag Building will be used as office space for the Scientology worker bees. Unlike the movie of the same name, the office space used in this building will more than likely have major celebrities in it. People like Tom Cruise and Issac Hayes will stop by to make their contributions to the Church by donating money and occasionally collecting the sweet honey left by the actual worker bees from the bee chamber. Did I forget to mention that Scientology is creating a massive army of bees to do their bidding? Well, they are. Their powerful bee soldiers have confiscated all evidence I had to back that theory up, but rest assured that it is true. It is a massive, deadly force, commanded by yet another celebrity Scientologist, Bea Arthur. Scientology's influence in Hollywood, and their massive army of bees, and their fleet of rabid attack lawyers has earned them a position of fear and power in the world. The FBI knows of all the underhanded goings on in the Church of Scientology. But even they are powerless to stop the mighty force.

Set to be completed by late 2003, we can only wait and observe this Death Star of a religious building come to fruition. But what's next for Scientology after this? They already have a navy, an army of celebrity slaves, the power of volcanos, and now a giant fortress. According to the laws that dictate super-villainy, the next step is obviously some kind of powerful death ray. So, by my calculations, we have exactly four years to live before we have to send Hollywood action stars like Steven Segal or Jean Claud Van Damme in to their headquarters to stop them at the last minute. Hollywood action stars are the only ones who can pull off slick enough operations to finally put a stop to the madness. That's the way these conflicts are usually resolved in the world. But, as I think about it, I realize that there is a flaw in that type of plan this time. By now, both actors are likely to have become already become Scientologists, and would surely turn on us like a dradle at a bar mitzvah. That's a Jewish joke, brought up specifically because the Jews are the one force in Hollywood more powerful than Scientology. If anyone can stop the bastards, it's the Jews. Somebody call Woody Allen and Mel Brooks, for they are our last hope.

She's At It Again!

Helen Gunther is here to answer your questions. Think of her as Dear Abby, but only a living version. This week, she deals with many hard hitting questions, like this one...

My best friend is fourteen. Over last summer she did pot; so when we started school again I tried to break myself away from her, so I wouldn't get dragged down. Now we are friends again. She stopped doing pot but she's getting a bad rep with guys cuz she goes from one to the next and does more than just make out. She has a bunch of home problems, her mom and dad drink and smoke, and practically make her raise her little brother. I don't know what to say to her, and I already told my mom that she did pot. What do I do? - Love, No Druggie Daughter

To see Helen's super neat, informative answer, just follow this link! You'll be glad you did, because God knows you need advice on something.