My brothers in terror, I have called this meeting to state what has been obvious for some time now: We are losing.

Our competitors in Al Qaeda, Hamas, and Abu Sayyaf have outperformed us for ten consecutive quarters. Have you seen the latest numbers? Or are you so certain of your failure that you don't even bother to pick up the Jihad Street Journal anymore? It's not too late, people. This is still an emerging sector, and we can regain the market lead if we're willing to make some fundamental changes to the way we approach terrorism. Let's face it; we grew complacent when we were on top, and now our methodology is severely outdated.

We are still relying on cold-calls, for Allah's sake! We walk from house to house in the unbearable heat and shout "Boo!" when someone comes to the door. When there is no answer, we write "Boo!" on a sticky note and leave it on the door. Sometimes the note is blown away by a gust of wind before it can unleash terror on the homeowner.

This is no way to run an operation. If we want to compete with the big boys, we must study their innovations and think outside the box. These guys are using car bombs, hijacked planes, suicide bombers, and improvised explosive devices, and their numbers are twice as good as ours ever were. If you don't believe me, log on to Xbox Live and check out their gamertags. Terrorpoints out the ass, folks.

I have prepared some ideas. I wrote them down on these surplus terror sticky notes this morning, and I couldn't help but notice that the notes are pink. Of all the colors, pink. I pray that we did not pay extra for the rainbow pattern. We did. I see. Mussef, we are going to have a talk after this meeting. 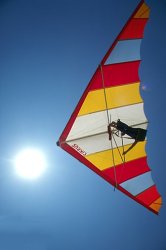 A masterful plan in action.My first idea is a hang glider with a generous coat of gasoline splashed on the wings. We leave one of these out in the open in a major American city and watch from a safe vantage point as the infidel's evil nature takes over.

You see, nothing pleases Americans more than forsaking Allah by flying hang gliders. They take perverse pleasure in the act. It is tradition that on their birthdays, Americans gather their entire families up and fly one giant hang glider together while flipping off the heavens.

Within minutes of laying our trap, an American (possibly a Jew or siamese twin Jews if we are very lucky) will greedily clutch the hang glider's handle and take flight. Within a few moments the sun's surface will brush against the glider and set the gasoline ablaze. Millions of westerners will look up at this screaming, burning figure as it plummets to the ground, hopefully landing right on a den of perversion such as a music store or a hot dog stand. This will cause the witnesses to weep and lament their violent ways.

Or how about this: We all know that knowledge is power. In fact, just knowing that grants us enough power to open aspirin bottles with our bare hands. We also know that books are a source of knowledge. Knowing that makes us powerful enough to go through most days without taking a single nap.

Since books contain power, would it not be a terrifying display of strength if we drove the streets of America at a leisurely pace, openly flaunting our many books in specially designed automobiles of some sort? It would absolutely crush our enemies' willpower to see what they are up against.

We could even lend these books out to the infidels from these automobiles. It would be like saying, "Go on, read it. We don't care. We are so powerful that you can borrow As Bad As I Wanna Be by Dennis Rodman and we will still have enough strength to oppress women."

Another way we can spread terror - although I'm thinking it might be a little too much - is to take over their television stations and broadcast videos of ducklings on every single channel. They won't be able to escape the sight. Everywhere they turn, ducklings. We could maybe rent some billboards and terrorize them with additional images of ducklings that way too.

Why does this confuse you? Ducklings, baby ducks. Everyone is afraid of them.

Yes they are, Ramzi. My psychologist assures me that a fear of ducklings is a perfectly normal thing, and I think he's a little bit smarter than you. This is the problem right here. You guys are so out of touch, it's no wonder we're in the position we are!

Look, you don't have to love these ideas. My point is that I was able to come up with some really strong stuff in less than a day. I want everyone to brainstorm for the next few weeks. We'll bounce ideas off of one another to see what happens, and go from there.

If all else fails, we have that nuclear bomb in the lobby that we've been using to display our Highlights and Redbook magazines on. I'm sure we could do something with that. Hey, I know!

Have you guys ever read the Incredible Hulk comics? Do you know how he got all those powers?