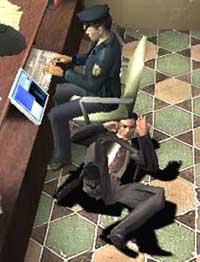 Four years ago, this image changed the way we look at physics engines, and the world.Looks like rain, and 'bout time too. Hadn't seen a storm in these parts in I don't know how many months. It's been mighty hot and the crops been takin' a powerful beatin'. The beets are thirsty, and so are the good folks of Sunny Valley. They are thirsty for change. They are hungry for action.

As a grizzled old farmer I sometimes reflect on my life in this town and where it's taken me. After a hard day's plowin' I look yonder over the horizon and watch the sun set for the day, but my mind keeps on goin' back to one thing I 'ave never understood, why Asshole Physics hasn't been more widely implemented and accepted in the video game industry.

It's been almost four years since Lowtax coined the term "Asshole Physics" and wrote about it in an October 2003 update. Since then a few games have come along that have given you a chance to be a complete asshole such as Half-Life 2, Oblivion and not much else. Despite exposure on this web site and that dummy site that used to steal SA's content and put Adult Friend Finder ads above it, Asshole Physics hasn't really caught on.

What is Asshole Physics? Where is it going? What barriers are preventing more games with Asshole Physics from being developed? Is the author of this update just rehashing some old concept because it'll be easy and will let him hurry up and get back to Team Fortress 2? I will answer all those questions and more, and attempt to figure out why the world has forgotten Asshole Physics.

A Brief History of Asshole Physics

A long time ago during the golden age of video games interactivity meant facing a pixelated stripper and pressing the spacebar to give her a dollar in exchange for a quick flash, the going rate for a titty flash at the time. Exciting stuff for a 12-year-old I know. While it taught me how a real economy works, it wasn't very advanced. Video game physics were defined by a strict set of scripted rules. If something moved in a game, it did so because George Broussard told it to. And that goes for all games, not just the ones he designed.

When Mario jumped and broke a block to feed his crippling 'shroom addiction, the resulting pieces flew up in the air and fell off the screen the same way every time. They weren't launched in random directions, hitting a female police officer just trying to do some paperwork at her desk in the process. When I was a kid I always thought to myself, you know, someday you're going to able to do that in a video game, bother a woman while she tries to go about her business, and it will be glorious. 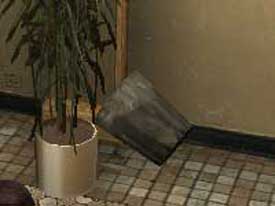 The trashcan that changed everything.That day finally came when Max Payne 2 was released. At one point during the angst-ridden adventure, the player comes across a police station featuring scripted NPCs depicting what cops do best, framing O.J. Known for placing all kinds of exciting interactive stuff in their game environments such as flushing toilets, light switches and whores, 3D Realms crafted one of the first true Asshole Physics playgrounds.

At the front of the station was a desk featuring a woman in a never ending ballet of data entry. Though the woman was firmly glued to the floor, the trash cans weren't. The player could easily kick the trash can in her general direction, hopefully paralyzing her in the process. Unfortunately the woman never reacts, much like my ex-girlfriend in bed. Hi-o! Still, Asshole Physics was born on that fateful day in that very police station and Max Payne 2 showcased its awesome potential.