There Are Only Three Exciting Months Left!

In three months all will be revealed as 2005 comes to its shocking conclusion! Lives will be lost, friendships torn and tested, and hidden secrets surface to tear people apart! Alliances will be shaken, and everything you thought you knew will turn out to be a boldfaced slippery slope! Nothing will be the same once the ball starts moving!

See why 2005 is the most talked about year since 2004! There are three months left to disarm the bomb before it EXPLODES knocking out another year from the calendar! The mystery that brought these months together and set them in motion will be exposed! Find out what happened to SEPTEMBER and the lost months! WHEN DID I GET THE OIL CHANGED? 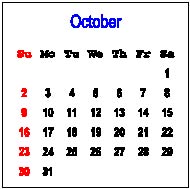 It all begins with a bang in OCTOBER! Or "SHOCKTOBER" as it will henceforth be known as! Someone is writing checks he or she can't cash! And everybody on the continent will pay the price! Find out who will stop at nothing to see their disturbing vision of the future realized! THE DOG NEEDS HIP REPLACEMENT SURGERY!

A government conspiracy threatens to disgrace a nation unless one man gets to the truth before the truth gets to his family, and kills them! Watch him stop at nothing as he risks life and limb to save the world with just THREE MONTHS LEFT BEFORE THE END! This October, find out who cracked THE DINNER PLATE. The pieces are glued back together, but the scars still remain.

The streets will run red with blood and evil as HALLOWEEN sinks its teeth into the flesh of SHOCKTOBER! Nothing can prepare you for the sight of monsters roaming the streets... AND KNOCKING ON YOUR DOOR! If you have a doorbell, YOU WILL BE RUNG OUT TO DRY! Leave your porch lights off if you can't handle the October heat! There are 31 days and each one is a ticking time bomb waiting to go off like a rocket! 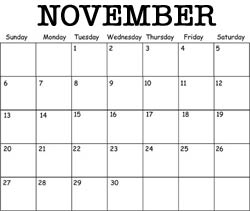 The forces conspiring in the shadows will be brought into the light, and you won't believe who and what they are! Come NOVEMBER you will know him by his jowls! Thundering like titans in the sky, they will haunt your dreams and chaperon your nightmares! You won't believe whose face a bug lands on! No one is safe when this bug decides its time for a rest! WHERE ARE THOSE CAR KEYS?

November builds to a startling conclusion with an action packed, star-studded Thanksgiving sure to be remembered! When family arrives, all bets are off! And double or nothing! Turkey will be served, AND SO WILL YOU! Is this the month of dressing, or the month of undressing secrets?

CAN YOU COUNT THE DAYS LEFT?

A line will be drawn, crossed, delineated more clearly, and THEN ERASED ALTOGETHER! Someone is sleeping with someone, and someone else is sleeping with a loaded gun! Everything comes to a head in DECEMBER when all the stops are removed and ramps inserted where the stops used to reside! Break lines will be severed, and the only way to stop will be by holding your breath until it's all over! Snow will fall and ice will form! SALT TRUCKS WILL BE NEEDED! 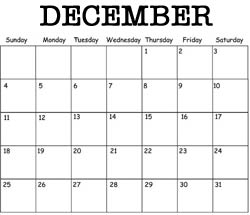 WHO IS THE STRANGER SHOVELING THE DRIVEWAY? What price is he asking and WHO WILL PUT AN END TO THE MADNESS OF THE ICICLES? The gutters are bleeding with solid ice daggers! WILL THE SALT BE ENOUGH TO KEEP THE PORCH SAFE? Leave your faucet dripping if you want to get out of this alive! The extra blankets are in the shed, but it's not safe in there – NOT YET!

Chanukah will unleash the fire of the ages as candles rage like infernos, burning everything in sight. The foundations of the Christmas Tree will be rocked as new city zoning laws threaten to UNTANGLE ALL THE ROOTS! Three wise men race against the clock to unravel the bureaucratic web before time runs out and Christmas is ruined! Are these presents under the tree, OR CLUES? GET READY FOR SOCKS AND UNDERWEAR!

The gloves will come off and mommy will hit daddy, brother will be turned against great uncle, and family values will take on a sizzling new meaning! There won't be any lids left to be blown off, and any makeshift lids fashioned out of crude items available will be equally blown to LID HEAVEN! ALL QUESTIONS WILL BE ANSWERED!

It's all leading up the bone-chilling premiere of 2006! But before 2006 arrives, THERE WILL BE A NEW YEARS EVE TO REMEMBER! Fireworks will ignite, and the sky with sparkle with LIGHT! Then get ready for 2006, a year you simply have to see to believe!

HOLD ONTO YOUR SEATS!

Yeah I suppose there's a Daily Dirt here. I suppose!!