This Man, His Corn 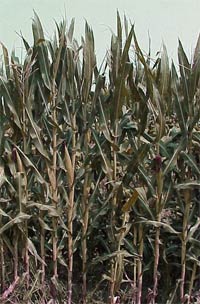 Enough, god damn it! This has gone on too damn long.

He moved purposefully toward the borders of the field, where the corn began and his freedom ended. He reached his fingers around a stalk and squeezed tightly, attempting to strangle it. He shook it violently and cursed the heavens above. His eyes so huge and lost, trying to find meaning in his actions and the course of events that made his actions seem like the only logical choice.

The corn did not suffocate, but rather broke loose in his hands. He held this strange object like it was a weapon or machine he did not understand. If he manipulated it the wrong way, it could hurt him. He did not know what it was or what it meant, only that he needed to understand it somehow.

He took the object back to his shelter and placed it on a table. He was going to dissect the thing, to find out what was inside. Slowly he peeled off the layers, gently plucking out the hairs, until he caught glimpse of something terrifying.

God damn it, he muttered, jumping to his feet and away from the table.

It was an eye! A vast array of ommatidia wrapped around a cylinder, staring at him. In all his days pondering corn, he never once fathomed that beneath its green exterior was a yellow compound eye. What would it tell the others? That he was a monster intending them harm? He took the all-seeing cob and wrapped it in rags, placed it in a box, and buried the box in dirt, hoping its companions did not see or know what had transpired.

That night the stranger came around again and visited him in his sleep. The two walked together through the rows of corn and the stranger stopped and plucked one of the eyes from a stalk.

A great harvest will be had this year, the stranger said.

The stranger peeled off the corn's eyelids, removed its lashes, and then started moving the exposed yellow eye towards his face.

He knew what was coming next, and he turned around to keep from seeing it. Somehow that eye was going to turn into a mouth, and it was going to eat the stranger. He woke up nervous, drenched in sweat. It was not enough that a million eyes were spying on him. Now a million mouths were salivating for a taste of his flesh. He listened to the whispers and shivered.


There was no reason left for him to cling to, no one left to tell him what was right and wrong in the world or what made sense. All he knew was that the corn was going to devour him if he did not act soon. He gathered all his strength and resolve and set out to complete the most important task of his life. He was going to kill all the corn.


He assembled all his tools, placing them on the table where he and the eye once examined each other. The task at hand was too great for him to do alone. Carefully, he evaluated each tool in his arsenal. Those that extended his reach would stave off his limitations. He needed to keep a distance from the corn, but be able to knock it down and smash it. He chose an axe-like tool. He did not remember what it was for, but he reasoned it was well suited for his needs.


Grueling day after grueling day, he worked hard in the fields, uprooting the corn, slicing it in half, thrashing and beating it into submission. He measured his progress by the noise of the whispers in the night. The whispers grew fainter and fainter. He knew they had to be talking about him now, and they were whispering even softer, no doubt fearful of inciting his wrath.

In the day the tall green wall gave way to a gruesome field of broken stalks, piled like bones in his grand killing fields. Exposed eyes stared up at him, but he did not fear them. He stomped on them readily when his work allowed it. For him it was first and foremost about pushing back the wall. He would have his freedom when that wall was broken.

Once, when hacking into the green wall an eye burst apart and some of its yellow particles flew into his small mouth. He bit down hard on them, and the taste was sweet on his tongue. He laughed the mad delirious laugh of a man succeeding against all odds. The corn could not stop him now.

After several weeks, there was nothing left but a massive field of death. He looked in every direction and there wasn't a stalk left standing. He could see mountains in the distance, great forests, tall spire buildings, and a vibrant world that he had forgotten about. 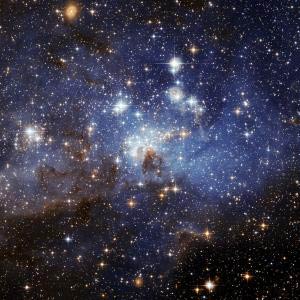 At night he listened to the silence and stared up at the sky, observing the second sun watching down on him with awe and respect. For a long time, the sky was all he could see. Now he had a horizon, and who knows what lay beyond it. He would soon find out as he journeyed away from his shelter. But tonight was his to enjoy at peace with the world and the cosmos above. He had earned such peace. All the hard work in the sun had charred his green skin, giving it a brownish hue. His long, gaunt form was covered with blisters. His lungs were tired, his tiny nostrils having worked harder than ever to try to provide enough air.

Though he would never know the truth, the corn was an echo of a distant time and place. The second sun that lit his night sky was once no more than a simple twinkle. Around it eight planets moved like clockwork, until the star could continue no more and swelled to great immensity. Its satellites were lost, but not before they came apart and sent debris hurtling through space in every direction.

One large chunk of debris, a veritable ark, carried with it the seeds and elements of thousands of organisms. In the extreme heat and radiation of its sun, these elements were twisted and tormented, combined, torn apart, reassembled, and finally frozen, becoming something else entirely. The ark moved through the void with incredible speed, until it found a new home on a distant world.

When it came down it set the sky ablaze and filled the atmosphere with poison. Those that survived were disoriented and confused, unable to comprehend what had happened. The corn, too, was disoriented. For the first time it had thought and memory, and recalled a time and place that was long gone. It tried as best it could to communicate, but it did not know how. All it could do was try to explain what once was to a man who could not understand. In the end, neither the grandest conspiracies of the heavens or the smartest corn in the universe has sway in stopping the beating of the determined man's heart, whatever form of man he may be.